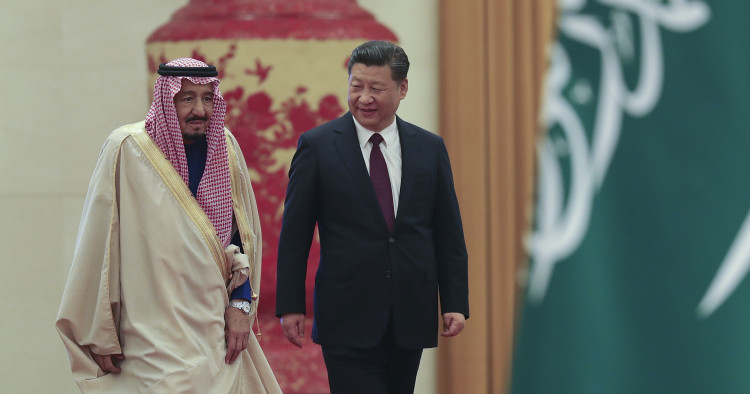 Around the world, leaders are scrambling to define their strategy for dealing with the inevitable U.S.-China cold war to come, and the Gulf is no exception. Considering the different objectives and perspectives that the region has in regard to the two superpowers, any misstep in forming alliances could be detrimental to its future.

Security vs. the economy

The stakes in a U.S.-China cold war are higher for the Gulf Cooperation Council (GCC) than most other regions around the world. The United States has been the main security guarantor for the region since the first Gulf War in 1990-91 and this is reflected in its expansive military presence, from the Central Command regional headquarters in Qatar to the Fifth Fleet headquarters in Bahrain, as well as the U.S. military stations in the UAE, Oman, Kuwait, Iraq, and Saudi Arabia. This significant U.S. military footprint means Washington has an outsized political and security influence in Gulf capitals.

Despite the alarmist rhetoric about American decline, the Trump administration succeeded in normalizing ties between Israel and both the UAE and Bahrain, as well as strengthening relations between Israel and Saudi Arabia. The Trump administration also moved the needle from a cold war to a “cold peace” between Qatar and the Arab Quartet of Saudi Arabia, the UAE, Egypt, and Bahrain.

Coinciding with the region’s security dependency on the U.S., China has emerged as the top importer of oil from Gulf nations. Before the pandemic and the resulting economic slowdown, the Gulf region as a whole supplied 28% of China's oil. Saudi Arabia exported a third of its oil to China in May 2020, while Iraq exported half of its oil to the country that same month. Given the GCC nations' dependency on oil exports, the Gulf is increasingly tied to China economically, especially in light of the pandemic and the global economic downturn.

One clear point of contention that has emerged is between Chinese tech companies and the U.S. and its allies over the build-out of 5G networks. Under the Trump administration, Washington launched the Clean Network Initiative (CNI), under which more than 53 American allies committed to cutting Chinese tech — particularly Huawei and ZTE — out of their 5G networks and supply chains. Outside of the EU nations and the Western intelligence-sharing network known as Five Eyes, Washington also pressured Israel to follow suit. When the U.S., after rallying Western countries against Chinese tech, moved to counter Chinese influence in the Gulf, however, the transition from Donald Trump to Joe Biden took place. This has given the Gulf capitals some wiggle room — aside from a Twitter exchange between the U.S. ambassador and the Chinese Embassy in Kuwait — to tackle the 5G question and consider the broader challenges posed by a future China-U.S. cold war.

The China challenge will drive U.S. foreign policy under Biden

While Washington will likely maintain a significant presence in the Gulf region, some recalibration of its global military presence will take place under the Biden administration, according to its new strategic needs — especially its growing focus on the Indo-Pacific. Moreover, the transition from Trump to Biden does not mean a reset for U.S.–China relations. There is a growing bipartisan consensus around the China challenge, as well as mutual support for many of the related policies championed by the Trump administration. Great power competition, especially with China, will be the primary lens through which the United States will evaluate its alliances in every region around the world.

The summit for democracy

Since his presidential campaign, Biden has advocated for hosting a summit of democracies to counter the advances made by authoritarian regimes such as China. Gulf leaders fear that Washington’s new alliance will not only be confined to democracies. Rather, they worry that it will eventually extend to a wider range of nations in an effort to tilt the balance of power in favor of the United States. Gulf nations would likely be hesitant to be part of a U.S.–led alliance against China. Along with the clear economic consequences, such a move would affect the strategic calculus in the region. The belief in China’s ultimate rise is widespread in the Gulf, despite U.S. aspirations — and Beijing may well punish nations that side with Washington in trying to block its path.

Given the immediate need for U.S. security guarantees against Iran and its proxies, GCC nations will have little room to maneuver and distance themselves from a U.S.–China cold war. Gulf capitals will need to find a middle ground between the U.S. and China if there is sustained U.S. pressure on regional allies to block or ban Huawei from their 5G networks. The Gulf may follow the French model by imposing a de facto ban on renewals of Huawei’s equipment licenses. Such a move would also ban telecommunications companies from acquiring new Huawei technology and eventually create a timeline for a gradual removal of existing Huawei products.

There are, however, fears in the Gulf that such a move would provoke Beijing into a coercive response similar to the ongoing China-Australia trade war. Some even fear that the threat of an unofficial ban on Huawei might represent enough of an incentive for Beijing to change its Gulf strategy, prompting it to move away from Iran in favor of a more strategic relationship with the Gulf, beyond oil.

Gulf nations realize that they eventually need to enhance their strategic autonomy. They must avoid being forced to pick sides in the long-term geostrategic competition between the U.S. and China. To achieve the autonomy it seeks, the Gulf needs to focus on building up its home-grown military capabilities so it can stand up against its rivals — mainly Iran and to a lesser extent Turkey — and diversify its alliances beyond the U.S. to include the U.K., France, Russia, India, Greece, and Israel. Achieving strategic autonomy will take many years and considerable resources, but it will be a necessity in the face of the changing geopolitical dynamics in the region.

The Gulf states worry that a U.S.–China cold war may force them to choose between Washington and Beijing. Either choice will undoubtedly have dire ramifications for the stability of the region. The Gulf faces a trade-off between security dependency on the United States and economic dependency on China, and it has little desire to pick between them. In the short term, the region will likely have to swiftly address the U.S. pressure on allies to officially or unofficially ban Huawei from their 5G networks. In the longer term, the Gulf states must seek greater strategic autonomy from the United States; it is only by forging their own path that they will be able to successfully navigate the coming U.S.-China cold war.