A Conversation with Egypt's Aboul Fotouh 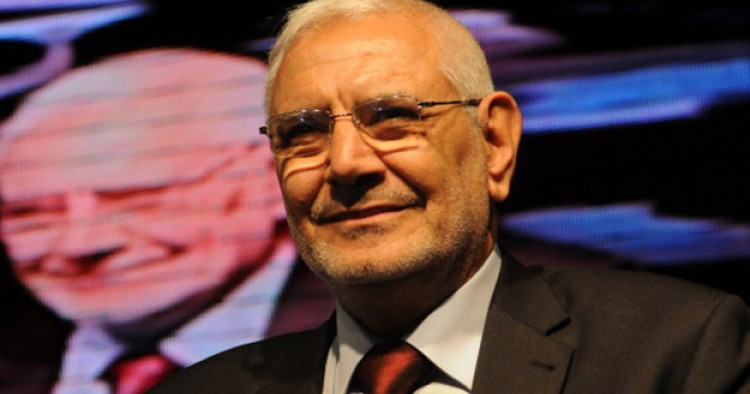 Dr. Abdel Moneim Aboul Fotouh, once a prominent member of the Muslim Brotherhood, former presidential candidate, and head of the Strong Egypt Party, spoke with Cornelis Hulsman, editor of Arab-West Report, in an interview for MEI regarding his break from the Brotherhood, Morsi’s ouster, and what he sees as necessary for Egypt’s future.

You were once a member of the Muslim Brotherhood. Why did you leave the organization?

I wanted to run as an independent candidate in the presidential elections, and the Muslim Brotherhood made it obligatory for members to join the Freedom and Justice Party. I also opposed the Brotherhood’s mixing of religious and political life. The Brotherhood was established as an Islamic call and education organization that intended to change society from the grassroots level. Its biggest mistake is its involvement in politics.

What did you think of Morsi’s year as president?

Should Morsi have resigned under the pressure of the June 30 demonstrations?

No, he should have called for a referendum for early presidential elections and remained in power until a new president was elected and handed power to him. That would have respected the constitution, even though we were against that constitution. Having a gap in power means a new revolution is taking place. The Strong Egypt Party is against this revolution; we have to complete the January 25 revolution. The country is now in chaos and is again experiencing military rule.

Your Strong Egypt Party is less conservative than the Freedom and Justice Party. How do you explain your change from conservatism to more openness?

The change occurred because of [my] involvement in society and my dealings with people, as well as reading and receiving information. I am also influenced by the first main figures of the Muslim Brotherhood who came out of prison in 1975 and had a moderate view of Islam, especially Umar al-Tilmisani and Shaykh Mohammed al-Ghazali.  My own viewpoint is based on al-Tilmisani’s teachings. I am considered the second founder of [al-Tilmisani’s] movement within the Brotherhood, which is based on a tolerant Islam.

How many members does your party have and what does it stand for?

The Strong Egypt Party has 10,500 members and is based on four main pillars: respect for Arab identity; opposition to the old regime and to foreign interference; strengthening the values of freedom; and advocating justice, including social justice, because 70 percent of Egypt’s population is poor.

You have said that you oppose labels for political parties such as Islamist, civil, or Islamic?

Given your knowledge of the Muslim Brotherhood, what do you see as its political future?

Egypt has never been more polarized. What are your thoughts about how to bridge the Islamist/non-Islamist divide?

The divide that has been there for decades is between the elites. While the Egyptian street is currently living in a polarized environment, it is only temporary, and harmony among Egyptians of different affiliations and viewpoints will resume. This has been the case in Egypt throughout its history.

Concerning the divide between the elites, there is no hope until these elites are replaced by different elites that can represent the hopes and aspirations of the Egyptian people. The current elites have withered and are still based in a heritage of hatred and hostility with which the new generations have no relation. This hostility is not related to the real needs of the people, and it does not aim to resolve their problems. Therefore, it will dissipate.

In your view, what is the best path to bring about the new government?

We shall not take part in any government that takes a path different from the path of elections. Egypt needs a caretaker government of qualified figures that is not politicized. This should remain until parliamentary elections that are free, fair, and transparent take place and create a government that represents the views of the street rather than being imposed on the people.

What are your thoughts regarding the attacks on and destruction of churches and Christian property? Who are the perpetrators?

It is without a doubt that such crimes will remain engraved in the memory of the homeland. These crimes started with the cold-blooded killings of hundreds or maybe thousands of Egyptians in the sit-ins of Rabaa al-Adaweya and Nahda Squares, but the crime of burning churches and killing police officers in their stations is also a crime that is not less atrocious and is unjustifiable despite of the atrocity of the former crime.

Egyptians have a great sanctity for houses of worship, and these houses have a special sanctity in Islam whether they are churches or mosques. Thus attacking churches or attacking our Christian brothers is denounced both nationally and religiously.

What is your take on the state of the January 25 revolution now? What would it take to get it back on track?

The revolution is now far off track. We have lost the democratic path—the right to hold sit-ins and public and personal liberties. The security services have not changed their ways from Mubarak’s days. But I see clearly and resolutely that the revolution will continue if the current situation remains as it is. This is because Egyptians will not accept returning to the life of humiliation and slavery that they experienced under Mubarak. Freedom is a value that we hold dear, and the people will not lose it that easily.