The Copts Under Morsi: Leave Them to the Church 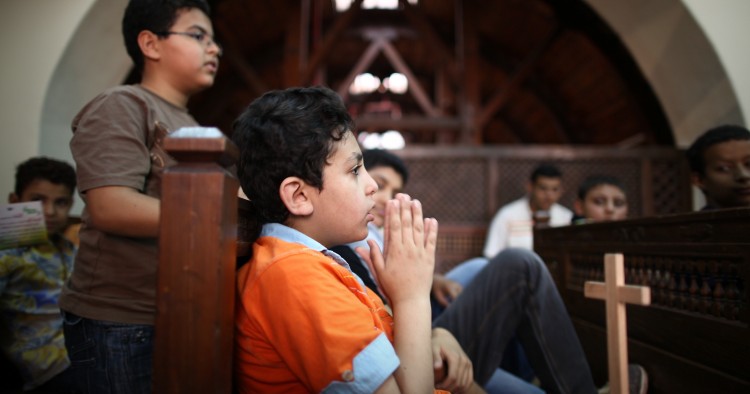 When Mohamed Morsi assumed the mantle of first democratically-elected, civilian president of Egypt, he both resigned from the Freedom and Justice Party‑‑the political arm of the Muslim Brotherhood‑‑and declared himself “president of all Egyptians.” Now, only ten months later, the country’s Coptic Christians are undoubtedly sneering at the insincerity of Morsi’s initial gestures toward magnanimity. They have ample cause to do so, not least of all due to the president’s February decision to set the now-suspended parliamentary elections for dates that coincided with the Easter observance of the Coptic Orthodox Church, by far the most important holiday celebrated by the Coptic Orthodox, who constitute the vast majority of Egypt’s Christians.

Once he learned of the conflict of dates, Morsi was quick to amend them, but whether he realized it or not, the damage was already done. Those who wondered whether the president had a single Coptic advisor, or for that matter an advisor possessing the least familiarity with the lives and practices of Copts, now had the answer to their question. The profound sense of invisibility held by Copts‑‑a sense explored by anthropologist Anthony Shenoda‑‑has become markedly amplified in the midst of Egypt’s purported “democratic transition,” confirming the worst fears that Copts held upon the rise of an Islamist president.[1]

During the 18 days of the Tahrir sit-in of January-February 2011, many in particular quarters of the Coptic community harbored great hope that the Egyptian uprising would mark a departure from the customary pattern of sectarian relations in Egypt. Under the Mubarak dictatorship, this pattern was characterized by a slender rhetorical commitment to the principle of national unity of Copts and Muslims, papering over an ever-increasing Islamization of the public sphere‑‑an Islamization that was actively abetted by the government as a means by which to placate socially conservative Islamists, now widely known as Salafists. For his part, the Coptic patriarch of the time, the late Pope Shenouda III, cooperated with the regime as a means by which to strengthen the Church as an institution within the Coptic community at large. The unfortunate result of these parallel processes of Islamization in the Egyptian public sphere and the rise of the Church’s influence within the Coptic community was a growing estrangement of Muslims from Copts and vice versa.

Inspired by the revolution, Coptic activists seized the opportunity presented by Egypt’s transition period and mounted a series of unprecedented marches to the Egyptian Radio and Television Union building in downtown Cairo, known as Maspero. These marches insisted not only on the equality of Copts and Muslims before the law, but further demanded an end to the collaboration of Church officials with the state‑‑a collaboration which had marginalized not only Copts uninvolved with the Church, but Copts whose voices within the Church were accorded relatively little credence by the clerical hierarchy, such as Coptic women.

The Maspero massacre of October 2011, during which the then-ruling military killed nearly 30 Coptic demonstrators in the midst of one of the marches, was a devastating blow in the struggle to achieve Coptic aims. That the Egyptian military, as quintessentially national an institution as Egypt possesses, could enact such a sectarian atrocity with so little regard for the consequences in Egyptian society at large, was deeply shocking to Copts, particularly so when the political ascendancy of the Muslim Brotherhood, and Islamists generally, seemed all but assured.

The presidential elections of May-June 2012 left Egyptians with a choice between the Brotherhood and a Mubarak holdover with strong ties to the military. In a runoff that was ultimately framed as a choice between revolution and counterrevolution, Egypt’s chattering classes widely assumed that Copts supported the counterrevolutionary candidate, Ahmad Shafik, as a means by which to keep the Brotherhood’s Morsi out of power. Indeed, there were priests who stood accused of using the pulpit for political purposes and imploring their parishioners to vote for Shafik. Amidst the attributions of blame for Shafik’s success in the polls, observers almost never asked why Copts would support a military man in the wake of the Maspero massacre.

Just as frustrating as the assumption that the Copts were inherently counterrevolutionary was the assumption that Coptic Christians constituted a coherent political bloc at all, whose political loyalties could be mapped with ease on the Egyptian political landscape. There is scarcely reason to doubt that there were significant numbers of Copts among the revolutionaries who reluctantly opted to vote for Morsi as a means by which to prevent the military’s consolidation of political power.

The pitched battles that now fill Egypt’s streets from Cairo to Mansoura to Port Said are testament to the sense of deceit experienced by the Egyptians who thought a vote for Morsi was a vote for the revolutionary demands of bread, freedom, and social justice. Among the Copts who voted for Morsi, though, that sense of deceit is doubly conspicuous. Indeed, the president’s rhetoric about representing all Egyptians was accompanied by the tangible commitment that he would appoint two vice presidents‑‑a woman and a Copt. Not only would this commitment remain unrealized, but the ministerial posts to which Copts were ultimately appointed were of far less consequence than the posts held by Copts under the Mubarak dictatorship. All in all, the tokenism that characterized Mubarak’s approach to ensuring Coptic representation in government persists under Morsi’s leadership. Copts are conceived not as equal citizens under the law, but as a political constituency that must be placated strictly in terms of numbers, almost as an afterthought.

Emblematic of this approach is how Copts are referenced in Egypt’s recently enacted constitution. The Muslim Brotherhood insists that the constitution, despite the resignation of all Copts from the constituent assembly, represents a concession to Coptic sensibilities in the form of a provision that dictates that all personal status affairs of Christians, such as marriage, divorce, inheritance, and child custody, are to fall exclusively under the purview of relevant church officials. The principle of equal citizenship under the law is effectively abandoned, and the Coptic Orthodox Church is empowered to rule on the most sensitive matters in Copts’ lives‑‑regardless of the particular individuals’ commitment to the Church. One almost gets the sense that the Brotherhood would prefer to “leave Copts to the Church” in much the way that the Ottoman Empire left the rule of Christians to their respective Churches under the nineteenth-century millet system.

The lot of those Copts who took a chance on the Brotherhood in the presidential runoff is ridicule and humiliation. More broadly, though, the sense of political immobility that now pervades Egypt as a whole will leave Copts with a particularly acute sense of the futility of voting when the elections eventually take place. Sadly, this is just the sense that they had about voting under the Mubarak dictatorship.