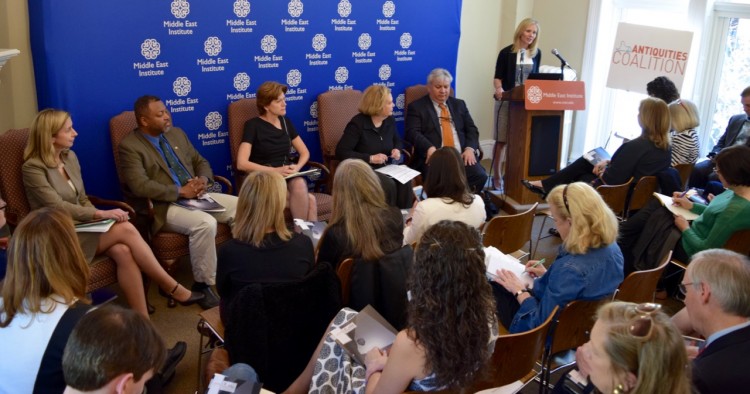 WASHINGTON, DC (April 13, 2016) – Today the Antiquities Coalition, Asia Society, and Middle East Institute released #CultureUnderThreat: Recommendations for the U.S. Government,  a series of steps for confronting growing threats to our cultural heritage and global security. Cultural racketeering – the global trade in looted antiquities – is a multibillion-dollar industry that funds organized crime and terrorists like Daesh (also known as ISIS). Cultural cleansing – the systematic destruction of a targeted group and its heritage – has been used by Daesh, al Nusra, and other terrorist organizations to terrorize populations under their control.

In the current crisis in the Middle East and North Africa, both are being used by extremist groups as weapons of war and fundraising tools. In Iraq and Syria, millennia-old temples at Palmyra, Nimrud, and Hatra have been destroyed. Across the region, three to five million archaeological sites are under threat from organized plunder or destruction by terrorist groups and brutal regimes. The loss of life in the region from these groups is reprehensible. So is the destruction of those institutions that represent the region’s storied history.

The #CultureUnderThreat report outlines specific actions that can be taken by the Obama Administration, Congress, the art market, and the international community to reduce cultural destruction and looting, end impunity for illegal trade in heritage property, and sever this key funding source for extremists like Daesh. The report calls for new policies, practices, and priorities in the public and private sector in the U.S. to stop antiquities trafficking and heritage destruction. A follow-up report will address actions by MENA governments, NGOs, and private stakeholders to prevent looting and cultural cleansing within and across their borders.

“As the United States is both a target of Daesh and a major destination for stolen antiquities, it is a national security imperative to disrupt illicit antiquities trafficking,” said Deborah Lehr, Chairman of the Antiquities Coalition. “The report issues comprehensive recommendations that will be useful for President Obama during this administration and will serve as a guide for the next administration.”

“Selling stolen artifacts is a critical source of funding for ISIS,” said Wendy Chamberlin, President of the Middle East Institute. “The United Nations and the international community can and must do more to disrupt this flow of cash and weaken terror and criminal networks.”

“This is an issue where we have global agreement, so the real question is, ‘what can be done?,’” said Josette Sheeran, President and CEO of Asia Society. “We can’t decide how to tackle the looting and destruction of antiquities in the heat of the moment. We need pull together our best ideas and come up with a plan of action. I commend the Antiquities Coalition for publishing this report, filled with practical recommendations”

For the federal government, the Task Force calls on:

●      The President to block the import of conflict antiquities through executive action; and to designate a senior director at The National Security Council to drive U.S. policy in the fight against blood antiquities and terrorist financing.

●      The U.S. Congress to pass the Protect and Preserve Cultural Property Act (H.R. 1493/ S. 1887) to restrict antiquities imports from Syria; and to grant the limited waiver requested by the State Department to rejoin the United Nations Educational, Scientific, and Cultural Organization (UNESCO) to maintain U.S. leadership and influence in the global battle against heritage destruction.

●      The U.S. Defense Department to consider, as appropriate, the launch of airstrikes when extremists organizations threaten heritage sites; to further identify “no strike lists” of cultural sites; to improve and standardize cultural property protection training for all military personnel; and to increase the number of cultural heritage specialists in U.S. Army and Marine Corps Civil Affairs units to better prepare the modern “Monuments Men and Women” for future missions.

●      U.S. law enforcement to buttress Immigrations and Custom Enforcement’s “seize and repatriate” strategy with investigations and prosecutions that dismantle criminal networks engaged in the antiquities black market, as well as to provide additional resources for these efforts; and for the U.S. Justice Department to end impunity by appointing dedicated prosecutors with expertise in heritage crimes, modeled on its wildlife trafficking unit.

For the international community, the Task Force calls on:

●      The United Nations to urge the International Criminal Court to open an investigation of cultural crimes in Iraq and Syria; to include the safeguarding of cultural resources in peacekeeping training and mandates; to incorporate heritage protection in post-conflict planning; and to support the capacity of national courts to conduct domestic prosecutions of cultural racketeering and cleansing.

For the art market, the Task Force calls on:

●      Museums, dealers, and auction houses to recommit to greater transparency and make publicly available documentation of legal title and known ownership history for all antiquities.

●      An art dealers’ trade organization to establish a registry of antiquities dealers who are verified to abide by prescribed ethical codes and industry best practices.

●      Collectors, dealers, museums, and other market players to cease using stolen art database certificates as the sole proof of due diligence for antiquities acquisitions.

Three leading U.S.-headquartered NGOs – The Antiquities Coalition, The Middle East Institute, and The Asia Society – convened the #CultureUnderThreat Task Force to combat these crimes. The #CultureUnderThreat Task Force was assembled following the May 2015 Cairo Conference, where ministers from 10 Middle East and North African nations agreed to take steps to combat cultural racketeering. Their collection action plan – the Cairo Declaration – was further reinforced by the #CultureUnderThreat Forum held on the margins of UNGA in New York in September 2015. This forum produced a Call to Action to combat looting and protect culture under threat. This report also builds off the excellent work done by the Louvre Museum, the Norwegian Institute for Cultural Heritage Research, and other cultural protection groups.