Davutoglu’s Resignation: What it Means for Turkey 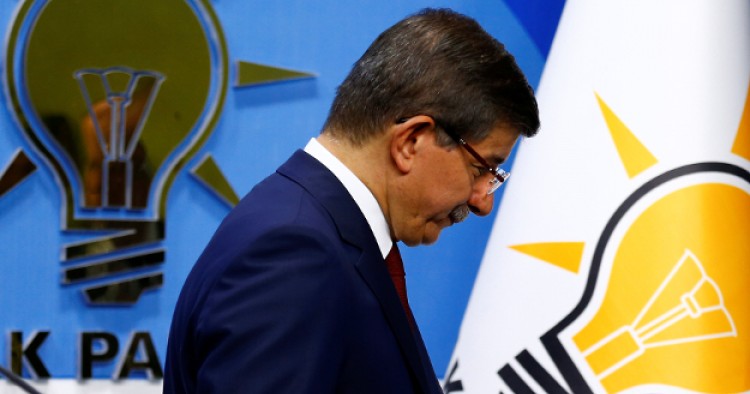 Turkish Prime Minister Ahmet Davutoglu has announced his resignation after 20 months in office. The decision has exposed a rift with Turkish President Recep Tayyip Erdogan, with whom tension has been building for some time. Erdogan handpicked Davutoglu as the country’s next prime minister after he became the president in August 2014, expecting that he would play a backseat role as Erdogan pushed ahead with plans to make the largely ceremonial presidency into an all-powerful executive position. Instead, Davutoglu tried to carve out a profile of his own and at best offered half-hearted support to plans for a stronger presidency.

While there have never been open spats between the two leaders in the past, there were major disagreements. Davutoglu pursued a more moderate approach to the Kurdish question, arguing that a resumption of peace talks with the Kurdistan Workers’ Party (P.K.K.) was still possible if the P.K.K. withdrew its armed forces from Turkey. Erdogan staunchly opposed the idea, opting for a more hardline approach.

The two also differed on the pre-trial imprisonment of academics, who were arrested earlier in the year over alleged “terror propaganda” after they signed a petition calling for an end to the fighting in the country’s Kurdish region. While Erdogan called on the judiciary to act against their alleged treachery, Davutoglu was opposed to their pre-trial imprisonment. Another conflict erupted when Davutoglu publicly proposed legislation aimed at tackling corruption. Erdogan, whose son and inner circle were implicated in a corruption probe in 2013 and 2014, publicly attacked the proposed legislation and the bill was withdrawn. More recently, Davutoglu secured a deal with the European Union to stem the flow of refugees across the Aegean Sea in return for visa-free travel to the E.U. for Turkish citizens and an acceleration of Turkey’s E.U. membership process. Erdogan, on the other hand, has shown little interest in the issue, at times making it harder for European leaders to sell the deal to their public with his harsh and threatening statements against the E.U.

But probably the most important bone of contention between the two has been Erdogan’s rush to switch to a presidential system. Despite his public remarks suggesting otherwise, Davutoglu is deeply reluctant to move forward with Erdogan’s version of presidentialism, and prefers a presidential system that is strictly controlled by a rigorous check and balance mechanism. Erdogan, on the other hand, wants to build an imperial presidency that accumulates all the power in his hands and has been irritated by what he sees as Davutoglu’s ‘foot dragging.’

Davutoglu’s departure will pave the way for Erdogan to consolidate his power further. He will handpick a new loyalist to take over as prime minister at the party’s convention scheduled for May 22, and push ahead with his presidentialism agenda. He is then likely to call for early elections with the hope of winning a parliamentary supermajority, which will give Erdogan the ability to change the constitution unilaterally to build an executive presidency. Erdogan’s plan might work, particularly if the ultra-nationalist M.H.P., which shares a constituency with the ruling A.K.P., fails to change its unpopular leader Devlet Bahceli. M.H.P. dissidents have criticized Bahçeli since the M.H.P.’s poor showing in last November’s election, in which it only won 11 percent of the country’s votes. Bahceli’s opponents have collected enough delegate votes to hold an extraordinary convention to challenge the party’s leadership, but their attempts to hold a convention have been blocked by party headquarters. If they manage to replace Bahceli with, for instance, popular female M.H.P. figure, Merak Aksener, the party would be expected to capture around 5 to 6 percent of A.K.P. votes in early elections. If not, frustrated M.H.P. supporters might turn to the A.K.P.

The pro-Kurdish People's Democratic Party (H.D.P.) was another roadblock in Erdogan’s plans to capture a supermajority in last year’s June and November elections. But the party has since been the target of several court cases and a smear campaign. With their parliamentary immunities lifted and intensifying fighting between the P.K.K. and the state, the H.D.P. has found itself marginalized less than a year after its historic victory in the June elections. All these factors could play into Erdogan’s hands and finally help him realize his dream.

Even if he fails to capture a supermajority in parliament, Davutoglu’s departure is likely to complicate domestic and international matters further for Ankara. Despite having largely been a shadow prime minister, Davutoglu is known for his more balanced and moderate approach domestically and is less of a divisive figure than Erdogan. With a new loyalist in the post of premiership, especially if it is his son-in-law who is among the contenders, Erdogan will carry out his plan with more efficacy and tighten his grip on power faster, creating further polarization and chaos in Turkey.

What is even more concerning for Turkey’s domestic politics and regional dynamics is the Kurdish question. With Davutoglu out of the picture, Erdogan poised to centralize more power and Turkey entering a new election cycle, fighting between the P.K.K. and the state is likely to escalate, which will complicate Turkey’s already tense relationship with the United States and U.S. strategy to counter ISIS in Syria.

Davutoglu also fared slightly better in European capitals. The West has seen him as a more balanced, constructive and pragmatic leader than Erdogan, who often lashes out at Western leaders, silences domestic opposition and disregards democratic freedoms. With Davutoglu gone, Western leaders are concerned that Turkey will slide further into authoritarianism, making it a less reliable partner in addressing pressing challenges from containing ISIS to stemming the refugee flow.

Turkey has already been on a downward spiral for some time with institutions crumbling, rule of law, democratic freedoms and human rights deteriorating, and P.K.K. and ISIS attacks intensifying under the ruling AKP. With the current developments, the worst may still be ahead.