The Decline of Coptic Activism in Egypt 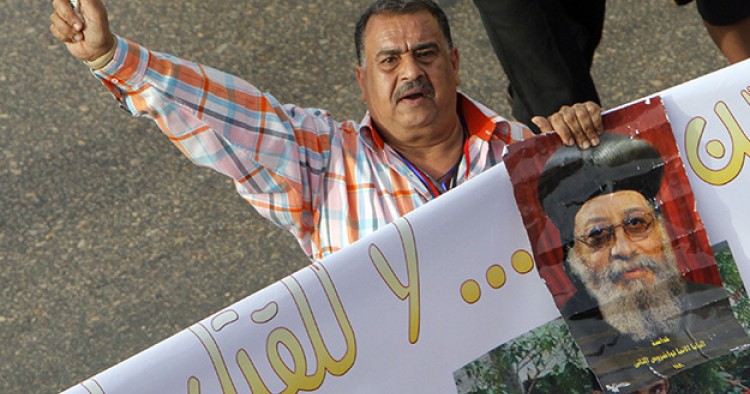 During and immediately following the 2011 Egyptian uprising, Coptic activism reached new heights. Copts organized and came together to call for protection for their communities and rights more generally. However, particularly since the fall of the Muslim Brotherhood and the election of President Abdul-Fattah el-Sisi, such activism has declined. Today, the number of active, effective Coptic movements can be counted on one hand. This leaves the church carrying the mantle of Coptic identity, allowing the pope to decide whether or not to engage in politics. Thus far, Pope Tawadros has opted to back the new government, and Coptic citizens are following his example.

Coptic Activism and the Arab Spring

On October 9, 2011, peaceful protestors, many of whom were Copts, gathered at the site of previous sit-ins at Cairo’s Maspero television building to demonstrate against attacks on churches. It was the kind of activity in which Copts had been engaging since Egypt’s protests began in January. Before an arriving march reached the building, the army used violence against the protestors, killing 27 of them. In the aftermath, Coptic activism faltered, as Copts were unable to mobilize large numbers for new demonstrations, though Coptic activists maintained a place in the press and, to a small degree, in national politics.

Once the Muslim Brotherhood came to power in 2012, a diverse group aimed to strengthen Coptic activism by creating the Coptic Consultative Council (CCC).[1] Over 30 movements joined politicians and businessmen in an effort to unify the non-clerical Coptic voice.

President Mohamed Morsi initially reached out to Christian religious leaders and appointed a Copt as one of four assistant presidents. Most Copts were wary of the Brotherhood, however, particularly when the group’s leaders increasingly described the opposition in sectarian terms[2] and certain allies threatened Copts directly.[3] As Morsi faltered politically, Copts joined the protests against him.

Once the Brotherhood was gone and Sisi elected, the Coptic community as a whole rallied behind the president, and activist pursuits decreased. While activists of all stripes found little space for dissent in the wake of Morsi’s downfall, Coptic counterparts especially adopted the nationalist discourse of an existential struggle for the survival of the state and national institutions. Part of the reason for this was the stance the pope took in regard to the military’s ousting of Morsi and confirmation of power. The pope had permitted Copts to join the protests against Morsi as citizens, and then stood with the grand sheik of Al-Azhar to support the transitional roadmap. Clerical leadership has historically been the default mode for most Copts, and activists are again following the pope’s lead in backing the new government.

Veteran Coptic activist Hany Gaziri then decided to dissolve his “Copts for Egypt,” one of the oldest Coptic movements, and called on other movement leaders to do the same.[4] The time was right, he said, to set aside sectarian demands and join the national cause. But most Coptic movements by this time had receded anyway. The CCC withered away with no significant activity, and groups like Copts without Chains, Free Copts, and the October 9 Movement had decreased their activities so much that they ceased to make any impact on the national scene.

What Remains of Coptic Activism

Yet activism has not died entirely. The Union of the Families of Maspero Martyrs continues to agitate for justice, mostly around the October 2011 massacre anniversary.[5] Another, the Foundation of the Victims of Abduction and Forced Disappearance, advocates for Coptic kidnapped girls.[6] And others have dedicated themselves to spiritual matters, such as the group Defenders of the Faith, which counters any public or media statements that disparage Christianity.

But in terms of traditional political activism, the landscape is quite barren. There are two primary movements that remain: the Coalition of Egypt’s Copts (CEC) and the Maspero Youth Union (MYU). Both are small, with 88 and 40 voting members, respectively. At the height of the Maspero protests before the massacre, the MYU laid claim to the support of over ten thousand, judged unofficially via Facebook conversations and attendance at demonstrations. Today it counts only a few hundred active members.

The CEC, led by Fady Youssef, formed in February 2012 following a breakup with the MYU. It is the most robust of the Coptic movements, with branches in 16 governorates. Youssef says his organization is not political but is dedicated to human rights. The CEC’s activity is done primarily through releasing statements, which are largely in support of the current order but also identify sectarian issues. The movement also organizes conferences to educate attendees about citizenship and help revive tourism. “Now is not the time for activism,” Youssef says, arguing that given Egypt’s current war on terror, one’s right to live is more important than one’s personal rights. In Youssef’s view, pressure can be applied in particular cases, but activists should only consider raising their voice in general dissent after the coming parliament has had a chance to pursue its legislative agenda. The exception is activism that is against the Muslim Brotherhood. The CEC has joined the newly formed International Coptic Union (ICU), which will soon present arguments to the European parliament for labeling the Brotherhood a terrorist entity.

Youssef believes that Egypt’s new political system will take care of the Copts. Though the CEC will not offer candidates for the March parliamentary elections, it will endorse those whom it deems “honorable.” He is optimistic about the new parliament’s composition, believing that Copts will be more numerous than before. Through their participation, he says, traditional Coptic issues such as anti-discrimination laws and church building will be addressed.

The other major Coptic movement, the MYU, reelected its general coordinator, Mina Magdy, in October 2014.[7] The MYU has maintained its more revolutionary stance. Though it mobilized for the presidential vote, it did not endorse the candidacy of Sisi, instead preferring to stay neutral. It is currently calling for the cancellation of the 2013 protest law, which bars citizens from street demonstrations without a security approved permit, and for the release of detained liberal activists. The organization solidly opposes the Brotherhood, but at the same time it accuses the government of stoking fear in order to restrict freedoms. The revolutionary dream has “shrunk,” Magdy says, though he still holds out hope that the president will enact its principles of bread, freedom, and social justice.

Unlike the CEC, the MYU believes that it is time to push for greater attention to Coptic issues. The organization currently works to get its message out through Facebook and other sites, as well as via likeminded media personalities. Magdy argues that Copts should now stand for the right of free expression for all so that the message’s momentum is carried into parliament. Too many Egyptians, and Copts especially, he says, are looking nostalgically at the Mubarak era as if it was something positive. In his view, this only makes it more essential for the MYU to put forth leaders and say the things that no one else dares to say.

But if the MYU leads, will anyone follow? Copts other than MYU members and supporters view Coptic activism to be negligible in influence and advocate for transcending Coptic concerns. Youssef Sidhom, editor of the Coptic newspaper Watani, speaks for many when he says that the Coptic community must move on from sectarian labels and evolve in two directions. At the grassroots level, he says, activists must transform into community leaders and aid their neighborhood constituencies. And at the national level, they must emerge as politicians and address issues beyond the Coptic cause. While Coptic activists had their moment during the uprisings, Sidhom points to parliament as the coming and enduring challenge in which Copts must legislate rights to support full citizenship and demonstrate leadership on the national stage.

But almost by definition, activists operate outside the sphere of formal power and put pressure on it. Few activists have space to operate these days, as the state has greatly limited the scope of civil society. Time will tell if the CEC or the MYU can muster the influence to capture the favor of the Coptic community—and more importantly, of Egypt as a whole.