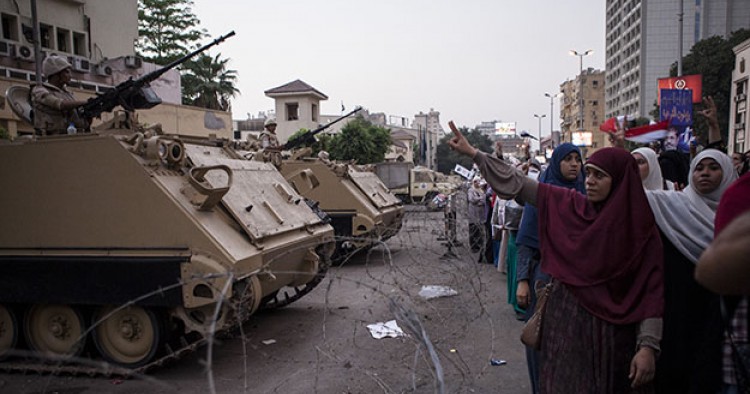 The current wave of violence in Egypt, which began in the wake of June 30, 2013, is unlike any other the Egyptian public has witnessed since the January 25 revolution of 2011. Both verbal and political forms of violence are driving Egypt’s state and society toward a dangerous precipice—and to a total departure from the path to democratic transformation.

Verbal violence is plainly evident in the rhetoric dominating today’s media discourse in the press as well as on satellite television channels and social media. Since June 30, Egypt’s media producers have been undermining and discrediting the patriotism of the Muslim Brotherhood and its allies on the religious right. In a highly aggressive manner, they accuse of treason anyone who opposes, on the basis of democracy, the intervention of the army in politics or anyone who refuses to be silent about human rights violations.

This is accomplished through the continuous dissemination of biased statements made against those who oppose the political steps taken in the wake of June 30, and through the fashioning and promoting of a narrow-minded and exclusionary conception of what constitutes “the Egyptian nation.” This alienates those in the opposition by casting spurious doubts on their patriotism.

All of this is happening to me, as well as to others. From the margins of the current situation, we face misleading rumors that defy logic: that we are part of a Brotherhood sleeper cell, allies of the religious right, or agents of Western interests that have come to the defense of the Brotherhood. Despite the absurdity of these rumors, they are being spread with alarming speed; every day there is a new group of politicians and journalists promoting them in public discourse. All the while, wars are being waged over definitions and categories. I and others are facing mounting pressure due to our insistence on classifying the army’s intervention and ouster of former president Mohamed Morsi as a military coup that took place following popular expressions of widespread dissatisfaction and anger on June 30.

As for political violence, its most basic aims lie in excluding “the other” to the point of his total elimination and removal from public life, and in controlling the actions of the majority of political parties, movements, and institutions that currently enjoy positions of influence.

On the one hand, this type of violence can be seen in the actions of the Muslim Brotherhood and its allies on the religious right, who are willfully ignoring the fact that a moment of widespread and popular outrage did occur on June 30—not to mention the posing of legitimate questions regarding certain government departments and economic and financial matters—as a result of their disastrous mistakes in managing public and political affairs throughout Morsi’s year in power. Their legitimate rejection of the undemocratic justification offered for the army’s intervention and removal of the president has helped pave the way for further political violence, such as their exclusion of the many popular factions that participated on June 30, incitements to violence and illegal activity on the part of some of their members and leaders, outright religious sectarianism against the Copts, an undervaluing of the cost of bloodshed, accusations related to foreign interference, cutting ties with popular factions who disagreed with them, and, finally, the rejection of any actual, specific measures to achieve accountability and transitional justice for the year of Morsi’s term (just as should be carried out for the decades of Mubarak’s rule, the period of SCAF rule, and the current administration).

On the other hand, political violence has also dominated the actions of the parties and movements at both ends of the political spectrum that have supported military intervention and the related post-June 30 political arrangements. These groups call for the defense of liberalism, social justice, the promotion of a civil and democratic state, democratic values, and the rule of law—all of which are wholly incompatible with summoning the army into politics and supporting its intervention and interference in the political arena. Today, this is leading to a politics of exclusion on the basis of political identity and an acceptance of handling human rights violations according to double standards.

These parties and movements, in their actions as well as in their political rhetoric, bear a striking resemblance to the fascist parties in Europe in the first half of the twentieth century and in Latin America in the latter half of the century. They are taking part in the militarization of the collective imagination of Egyptian men and women and endangering the possibilities of establishing a civil and democratic politics and electoral institutions that enjoy democratic legitimacy, are committed to the rule of law, and that will subject the military and other security organizations to oversight.

At present, these groups are allying themselves with elements within state institutions and financial interests that seek to overthrow the 2011 revolution and write it off as a folly or a debacle. In these elements’ view, June 30 came in order to overcome the revolution and to turn back the clock to the Mubarak era—and all the corrupt and repressive elements of that regime—with the avoidance of any serious commitment to accountability or transitional justice.

The supporters of the post-Morsi administration, along with both the verbal violence that has dominated public discourse since June 30 and the political violence faced by the Muslim Brotherhood and its allies, are together inciting the institutions of the Egyptian state to a third kind of violence.

This type of violence occurs at the level of state institutions, and its distinguishing features include the exceptional measures that are currently prevailing over those who oppose Morsi’s removal from office. Since June 30, there has been no transparency or accountability when it comes to human rights violations or the execution of official policy, which is currently dominated by the army and is swiftly establishing the institution of the interim presidency and its government as a sham.

Within the state security organizations, there is an organized operation to restrict freedoms and push against politicians and groups opposing the post June 30 arrangements using light repressive tools. Official discourse has been excessive in emphasizing the importance of the fight against terrorism in the Sinai and violence throughout the country in the name of national security, counterterrorism, and a commitment to the rule of law. This has been accompanied by an insistence that these undertakings are entirely separate from the political violence related to the events of June 30.

Just as violence in speech and politics are fundamentally at odds with the basic principles of democracy and human rights, the elements of this institutional violence are inconsistent with the goals of building a modern, civil state committed to the rule of law and to guaranteeing rights, freedoms, and equality for all of its citizens. In spite of this, there are many political actors who profess devotion to civil or democratic politics and yet are willing to take part in the institutions and workings of the state in the post-June 30 framework.

But these actors’ conceptualization of the civil state itself has become a cause for doubt, given their support of the army’s intervention and their silence on both the exceptional measures taken by the current administration and the lack of transparency regarding human rights abuses. They, along with political factions both on the left and on the right, have buried the possibility of a civil and democratic state and thrown open the gates to a militarization of the collective imagination of Egyptian society as a whole. It is they who will bear the responsibility before history for the serious crisis (which will inevitably be long-term) of leftist and liberal thought in Egypt after the credibility of democracy has been lost.

In light of the current waves of verbal, political, and institutional violence, then, it should come as no surprise that serious public debate has waned when it comes to implementing a clear plan for accountability and transitional justice that would cover the period from 1981 to the present. It should also come as no surprise that hysterical attacks are launched against any voice that opposes ostracizing the Muslim Brotherhood and the religious right; calls for national reconciliation; insists upon a commitment to nonviolence, transparency, and openness in public actions; and opposes the use of religion in politics on the basis that it is counter to civic values and citizenship. And it should come as no surprise that public opinion is being shaped by the military’s spokesperson and the commander of the armed forces’ demand for a popular mandate to confront terrorism and violence—and that Egypt is becoming increasingly distant from the path to democracy and mutual political understanding.

Translated from the original Arabic by Anny Gaul.