Egypt and the Obama Administration 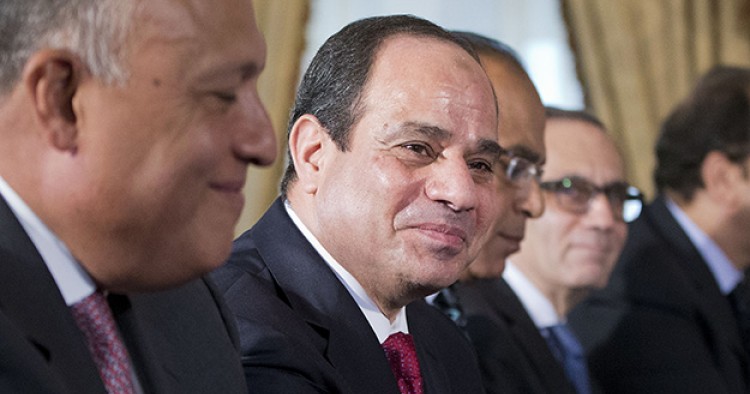 The meeting between U.S. President Barack Obama and Egyptian President Abdul-Fattah el-Sisi September 25, 2014 on the margins of the UN General Assembly in New York marked the first encounter between Obama and any Egyptian president since his meeting with Hosni Mubarak in the summer of 2010. The Egyptian media called it a victory and a breakthrough moment for Sisi. Bilateral relations between Cairo and Washington had withered after the ouster of President Mohamed Morsi in July 2013; hence this meeting was seen as the completion of American recognition of the legitimacy of Egypt’s new administration after Morsi’s removal. While the Sisi administration currently faces significant security, economic, and political challenges, the strategic Egypt-U.S. relationship that has spanned more than three decades could provide a base for addressing these issues over the next two years.

Sisi faces high expectations as he tackles Egypt’s problems. How he responds to these issues has important consequences for his relations with the United States.

Recent increased violence and insurgency in the Sinai Peninsula has led to great instability. On October 24, Sinai witnessed the deadliest attack on Egypt’s military in years. Twenty-eight soldiers were killed and another 30 injured when a car bomb exploded at the Karm al-Qawadis security checkpoint in Sheikh Zuweid in north Sinai. Hours later, three security personnel were killed when militants opened fire at a checkpoint in nearby El Arish. Then, on November 12, an attack targeted an Egyptian Navy vessel off Egypt’s north coast of Damietta. The premeditated and well-coordinated assault, led by the terrorist group Ansar Beit al-Maqdis (ABM), resulted in the death of several servicemen and the near destruction of the vessel. The attack revealed the strategic and logistical tactics of ABM, which days later pledged its allegiance to the Islamic State (ISIS).

Following the attack, Sisi declared on state television that "foreign hands” were behind the violence, and government sources have indicated that violence in Egypt—including Sinai—is linked to ISIS. This continued violence will significantly decrease foreign investment and tourism, negatively impacting the attempt to revive the Egyptian economy.

Egypt has received more than $20 billion from friendly Gulf countries, yet its economy remains shaky. In an attempt to decrease massive government expenditures, Sisi cut energy subsidies, a long overdue reform, although one that caused a 70 to 165 percent increase in fuel prices.[1] Egypt also faces high inflation and meager growth. The dire economic situation, on top of high levels of unemployment at 13.3 percent overall —25 percent for youth[2]—has led to continued youth frustration and anger.

To stimulate economic growth, Sisi launched two campaigns. The first, Tahya Masr, or Long Live Egypt, called for the national shared responsibility of Egypt’s struggling economy, with the central bank opening its doors to personal and corporate donations. The goal of the initiative was to raise 100 billion Egyptian pounds ($15 billion), but Sisi was only able to collect about $700 million. The project was a disappointment and a challenge to Sisi’s authority.

Sisi then launched the new Suez Canal project and ordered the central bank to issue 12 percent annual CD certificates to fund it. This second initiative would allow for the creation of a second waterway, increasing traffic and business via the canal and generating significant employment opportunities. The fundraising for the project was a success, and in less than two weeks, the government domestically raised the $8.5 billion it needed to fund the project in its entirety.

Gulf funding is also contributing to an array of projects in the education, public health, housing, infrastructure, and trade sectors. Whether government policies and projects as well as Gulf funding will sufficiently fuel rapid and job-rich growth remains to be seen. The Institute of International Finance predicted that Egypt’s GDP will rise to 3.7 percent in the coming year, compared to 2.1 percent in 2014.[3] But unemployment remains high at 13.1 percent.[4]

Egypt’s political landscape is currently in suspension as a result of a strong government crackdown and the recurring postponement of parliamentary elections. Tensions are running high due to the government’s repression of the opposition, particularly Muslim Brotherhood members and supporters, and its imposition of harsh limits on freedom of speech and assembly. Yet despite the government’s measures, there is hope for at least some political openings if and when the parliamentary elections are held. In a statement in November, Sisi indicated that the elections would occur before a major economic donor conference scheduled for March of 2015.[5] These elections could provide the opportunity to open up Egyptian political space by allowing competitive electoral campaigns, increased freedom of expression, and internationally monitored polling.

Secretary of State John Kerry has stated that Egypt is indispensable in combating ISIS, prompting him to travel to Egypt to solicit support for the U.S.-led coalition against it. Although Egypt joined the coalition, Sisi did not clearly indicate the nature of the country’s participation. Egypt will not contribute to the air strikes on targets inside Syria, and Sisi has remained vague on how Egypt could provide logistical and intelligence aid to the coalition.

The ambiguity stems from differing definitions of the war on terrorism. Sisi’s current focus is the Islamist militias inside Egypt and in neighboring Libya, not ISIS. In his meeting with Kerry in June 2014, Sisi urged him to form a wider antiterrorism coalition, targeting not only Syria and Iraq but Libya as well. However, Egypt’s limited interest in ISIS could change due to the newly declared allegiance of ABM to the caliphate, as well as ISIS’s growing presence in Egypt and its neighbors.

Egypt also has an important role in the Israel-Palestine conflict. As violence in Gaza flared for 51 days over the summer, no other country could successfully mediate between the Israelis and Hamas. The attempts that Turkey, Qatar, and even the United States made to implement a ceasefire failed, but Egypt persevered. The violent conflict in Gaza reaffirmed Egypt’s relevance in the region and underlined Egypt’s importance to U.S. interests in Israel.

Although relations are strained, the ongoing conflicts in the Middle East and the emergence of ISIS provide a strategic opportunity for the United States and Egypt to get their relationship back on track after a rocky period in 2013 and 2014. In spite of Washington’s pressure for an inclusive government and an improvement in human rights conditions, Egypt’s new government paid no heed to the Obama administration’s appeals. Nevertheless, Egypt did preserve the American strategic interests of the use of the Suez Canal and Egyptian airspace, upheld its peace treaty with Israel, continued U.S.-Egyptian intelligence cooperation, and moderated the latest tensions in the Palestinian-Israeli conflict. Obama finally reverted to cooperating with Egypt, as the risk of losing such a strategic relationship is too great considering the 30 years of American investment in Egypt’s military.

With two years left in office, Obama can make a stronger, more strategic foray into relations with the new government. His administration could assist Egypt in its own war on terrorism in exchange for Egypt making progress on sticking to its own democratization roadmap and upholding human rights. The United States could also provide additional financial assistance to fuel job creation and economic recovery.

Considering the fragile state in which Egypt finds itself, Obama should continue to mend U.S.-Egypt relations by assisting Sisi in countering the security, economic, and political challenges he faces today. Failure to do so would result in a legacy that failed to foster the growth of one of the United States’ most strategic alliances.