Egypt: Between Chaos, Authoritarianism, and Democracy 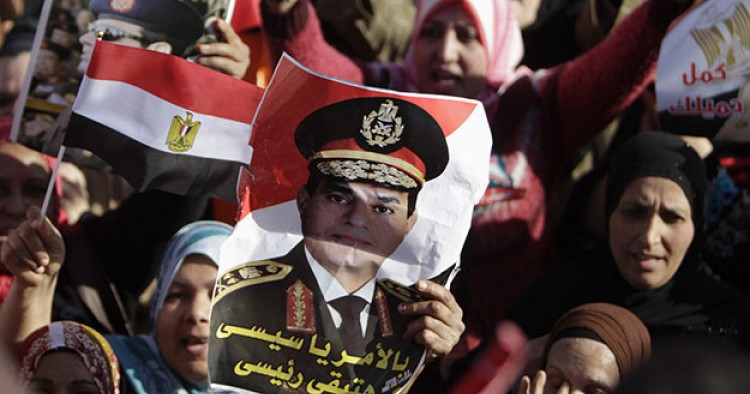 The literature on democratic transitions from the last 50 years has emphasized the process of transforming an authoritarian state into a democracy. Much has been written about negotiations between ancien regimes and democratic forces, particularly the bridges that must be made between elements of old and new regimes. Most studies on democratic transitions also examine the competency or democratic nature of such countries’ institutions. But there is a dearth of studies that address situations in which a state is absent and when institutions such as the army, police, and judiciary simply fail.

The prevalent literature reflects what took place in the wave of transitions to democracy in South America and Eastern Europe, as well as in many Asian and African countries. However, more recently we have seen attempts at democratic transitions in instances in which the state itself has fragmented and collapsed, particularly in the Arab world. This happened in Iraq following the American occupation, as well as in Libya. Because the Qaddafi regime built a failed state, not a national state, the fall of the regime automatically meant the fall of the state. In Libya today, although conflicting forces are conducting discussions, they do not have a state capable of protecting and guaranteeing what politicians may agree on. The same is happening in Yemen because of tribal and regional dominance over a weak state, and in Syria, where the state has been hijacked by a regime with a clear sectarian dimension.

What is certain is that the Arab revolutions have reintroduced the question of the national state. Is it possible to discuss democratic transition in the absence of a state? Or to read Tunisia’s trajectory as a success without reference to it as a national state with Habib Bourguiba’s republican system, which carried values and principles that protected Tunisia, even in the absence of democracy? Can we ignore the fact that the principal reason that Egypt did not fall prey to chaos was the existence of a modern national state, founded by Muhammad Ali in 1805? Despite the criticism that Egyptian state institutions face, and the reforms they require, it is significant that the state was founded to rely on a state army, not a sectarian army or the army of a particular regime, and had a police apparatus rather than militias, along with a judicial branch and an administrative structure.

The cohesiveness of the national state and the national army protected Egypt from the dangers of fragmentation and collapse. In contrast to what occurred in many other Arab countries, Egyptians did not see clashes between brigades and divisions of the Egyptian army––whether during the January revolution, when the army stood neither in defense of Hosni Mubarak nor in confrontation with him, or during the Mohamed Morsi era, which failed to penetrate the army and break its hegemony. Effectively, this translated into a split between supporters and opponents of the Muslim Brotherhood.

If we are to accept that a national state is a primary condition for achieving a democratic transition, we find that the success of Tunisia is partly due to it as a national state that preserved its practices and neutrality, and partly due to its adoption of a sound political route following its revolution. This is exemplified by its establishment of constitutional and legal precepts before political contests began.

This is in contrast to Egypt, where the state protected the country from the fate of chaos and collapse but followed a convoluted political trajectory. Parliamentary and presidential races occurred before the establishment of constitutional or legal precepts organizing the electoral process. Thus the Brotherhood came to power and gained the presidency without rules being set down prior, and while in power it decided to establish rules organizing the political process. The “Brotherhood Constitution” that passed in December 2012 was rejected by the vast majority of political forces and a broad segment of the public.

As a result of Morsi’s coming to power, the Egyptian national state faced a new threat, as the Brotherhood sought to dominate it and aimed to change its nature through so-called Brotherhoodization. This prompted many Egyptians to forget their bitterness toward state institutions, even after an extended experience of failure and mismanagement. They felt that their fight was not with an authoritarian state but rather against losing the national state in favor of a transnational Islamic state, or losing the state altogether and falling into chaos. It is important to note that if the state were to collapse, it would hinder democracy building in Egypt for generations to come.

It is true that the mistakes of the security apparatus during the Mubarak era as well as today have meant that few Egyptians see a difference between the security apparatus and the state. Indeed, the police appear to belong to the regime. Arrests have increased under the new regime due to the absence of a political intermediary between the state, which governs through its various bodies and institutions, and the people. This is especially true because of the weakness of political parties and the absence of a vision for creating a political environment suited to politics or party-based work.

The national state saved Egypt from the fate of civil war, state failure, and chaos witnessed elsewhere in the region, but it has not brought democracy. Many Egyptians’ reliance on a candidate who emerged from outside the context of political forces and parties––that is, from within the state and the military establishment––may be due to the fear of turmoil, terrorism, and infighting in the wake of the bitter experience of the Brotherhood government. That experience seemed to Egyptian society that it had faced its first democratic choice and failed. Many ordinary Egyptians thus long for the state’s return to exercise its guardianship; they believe that the state knows better than they do, and brings with it the stability of the status quo. For them, an undemocratic state and regime are better than no regime and no state.

Certainly, such a view will not bring about stability, nor will it confront chaos or terrorism. And it is the case that an authoritarian state was a primary reason that many countries in the region have gotten to the point where there is no state.

The existence of a national state in Egypt does not mean that in the absence of democracy, and with an obstructed political horizon, the country will not confront a troubled domestic and regional reality. Reforming its bloated institutions and initiating a democratic transition process are necessary to save the country from the dangers it faces.

But belief in the national state is necessary for a democratic transition in Egypt and in the rest of the Arab world. It is a condition for attaining a vision for reforming institutions and for eliminating the perception that democracy is merely an arena for chatter and the media. Whoever imagines that only foreign interference has brought down national states in the Arab world is mistaken. Authoritarianism and domestic failures, and the opposition’s inability to confront these problems, are the main reasons behind the downfall of the national state.

In countries like Egypt, Tunisia, Morocco, and Algeria, maintaining the national state and reforming it are not just important; they are key conditions for building democracy. As for countries from which the state is absent, they are in need of exceptional efforts to transcend their current situation and build a democratic system. States facing situations like that of Libya must rebuild the national state in parallel with political dialogue and reconciliation between factions. Whoever imagines that it is possible to build a democracy without a national state is as mistaken as whoever supposes that a national state in authoritarian guise can succeed in resolving the problems of its people.

Translated from the Arabic by Ann Gaul.