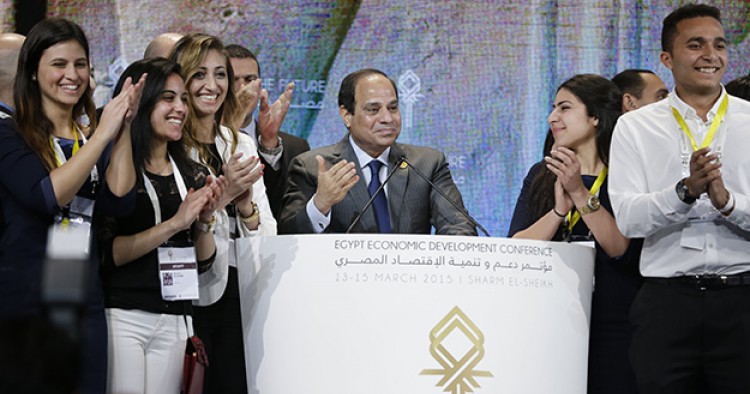 Saudi Arabia’s late King Abdullah first conceived of the Egypt Economic Development Conference (EEDC) as a means of supporting Egypt and its new government after the toppling of President Mohamed Morsi in June 2013. The plan was to provide a forum through which donors could coordinate their economic assistance, and lengthy preparations finally culminated in a well-organized event on March 13-15. Though skeptics had suggested that only Gulf leaders would show up, the EEDC was in fact attended by representatives of more than 112 countries.[1] The approximately 2,000 delegates included CEOs of major multinationals as well as top-level officials from regional and international economic organizations.

An objective analysis of the conference is complicated by the swirl of extreme expectations—high and low—that surrounded it. Some observers looked to the event to rescue Egypt’s troubled economy (a perspective welcomed by the regime and fueled by media propaganda), whereas skeptics prepared to declare it a failure.

In the wake of the conference, the debate has continued. Strong attendance and impressive pledges of economic support by political and business leaders from around the world appeared to revive a level of optimism not seen in Egypt since 2011. During the conference, “Proud to be Egyptian,” the slogan that accompanied the January 25 revolution, became popular again. Yet some observers have questioned the conference’s glitzy achievements, arguing that the announced financial support packages were not actually firm commitments, that terms favored foreign investors at the expense of domestic labor, and that the social agenda was not given enough attention.[2]

So was the EEDC a success? Is the regime exaggerating the benefits reaped from the conference, or have critics been unfair to disparage the results? The answer, not surprisingly, appears to be a little of both.

On the political front, the conference proved a success by any measure. The robust attendance signaled the international community’s confirmation of the regime’s legitimacy. Some of the credit for this goes to Egyptian diplomats, who have worked hard to convey to the outside world that the ousting of Morsi reflected the popular will.

On the economic front, the verdict is more complicated. If the benchmark for success is defined in narrow terms, namely overcoming the foreign exchange bottleneck and regaining the trust of investors, then the conference met its goals. The pledged dollar amounts provided vivid evidence in this regard, reaching $12.5 billion divided equally between investments and deposits in the Central Bank and exceeding $35 billion in memoranda of understanding and agreements around other future projects. Major multinationals reconfirmed their willingness to invest in Egypt, earmarking specific amounts and signing contracts at the margins of the conference.[3] Foreign investors agreed to support the Egyptian government’s huge new economic projects, such as expansion of the Suez Canal, development of the Golden Triangle region, and construction of a new capital city. They were no doubt reassured in part by a new investment code, which includes streamlining and reducing sales tax on capital goods, and a civil services law ratified just prior to the conference, signaling the regime’s commitment to legal and administrative reform. In other words, as a donors’ conference, the EEDC delivered.

But the Egyptian economy faces complex challenges, not all of which can be solved by a boost in investment. Two new cash transfer programs that target the poor were announced at the EEDC, and Egypt has seen steady improvements in the ration card and bread subsidy system, but critics have pointed out that the social agenda, including strategies to alleviate poverty, did not receive nearly enough attention at the conference. Others have expressed concern about labor rights, especially in light of the concessions made to the investors in the new investment code. (There is a new labor law in the pipeline, but its features have not yet been announced.)

Critics have also argued that loopholes in the new investment law will allow investors to benefit disproportionately from the deals—citing, for example, a provision preventing any third party from challenging a privatization contract in front of the courts. Moreover, the reduction of the income tax ceiling has been decried as an unnecessary concession made to investors at the expense of the broader public.[4]

Such issues can and should be debated, and more reforms are clearly needed. Monetary and fiscal policies should be better coordinated, corruption and stifling bureaucracy must still be overcome, and the social impact of expanding investors’ rights should be revisited. Yet it was never feasible to expect the EEDC to “fix” the Egyptian economy. The government itself unwittingly fueled such criticism by setting unrealistically high expectations and encouraging sensational reports in the media. It is thus no surprise that some Egyptians were disappointed by the conference’s actual results.

The EEDC will ultimately be judged according to the performance of the economy overall. Therefore, the conference does not yet qualify as a great success or failure, but rather as a major first step that needs to be followed by other important steps to ensure inclusive economic growth. Such measures include improved monitoring and evaluation of announced projects, including those presented at the EEDC, transparency regarding means and methods of finance of these projects, enforcement of current laws (and not necessarily designing new ones), accountability mechanisms for the executive, especially in light of the absence of a parliament, and the creation of an efficient and speedy judiciary. Without accompanying institutional reforms, the EEDC will amount to little more than a short-term political lift for the current government, and Egypt’s economic potential—brought into sharp focus by the conference—will remain unfulfilled.