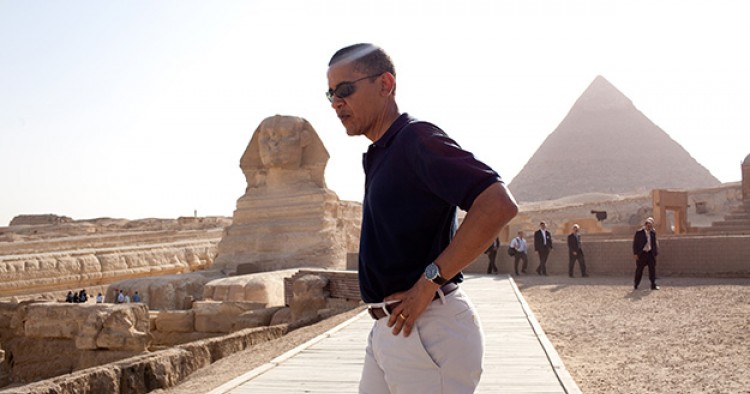 Egypt is in trouble. And Egypt’s trouble is bad news both for Egypt and for the United States. With a withering economy, continued political unrest, and poor institutionalization of new and ever-evolving political rules, many Egyptians have lost hope in the ultimate success of the country’s political transformation. Given the sacrifices and optimism associated with the removal of President Hosni Mubarak in 2011, the failure of governance in Egypt, though not entirely unexpected, has the makings of tragedy. The United States didn’t cause the uprisings that led to Mubarak’s ouster, and it can’t determine the success of governance in Egypt today. However, it is now time to pursue a more focused and active U.S. diplomatic engagement with Egypt than ever before. Business as usual is no longer sufficient to manage the risks Egypt faces in the near term.

Since political unrest began in earnest in early 2011, Egypt’s difficulties have multiplied. As the most populous country in the Arab world, Egypt was already traversing a treacherous path of high unemployment, inequality, and low perceived opportunity for the talented but terribly underutilized young. It was always naive to believe that a political transition to a freely elected government would resolve the country’s economic difficulties in the short term, but uncertainty associated with the transition, and the social divisions and violence that have been exposed in the process, have sharply amplified the dangers of an already precarious economic situation. While Egypt’s economy can survive (though not thrive) in the short-term with an infusion of funds from the IMF or Gulf states, both economic and political governance issues cannot be resolved so simply. Indeed, apart from surviving the immediate economic crisis, the country’s most pressing needs are for a strong institutional foundation that can provide both political and economic governance. This requires political leaders that are perceived as legitimate representatives of the public interest, as well as a set of rules by which key actors can agree to play.

This is where the United States matters to Egypt, and where bold and determined engagement with Egypt’s leadership is necessary. The Muslim Brotherhood, despite protests to the contrary, is at risk of losing control over much of what it values—economic growth, social justice, the transitional narrative—and in the process losing its popular support. Although the Brotherhood’s affiliated Freedom and Justice Party holds the presidency and came first in parliamentary elections, the party has yet to take control of the political sphere. Rather, it faces political instability and polarization in parallel with a collapsing economy and disintegrating social relations. This is the antithesis of the Brotherhood’s aspirations, and it needs, though perhaps reluctantly, external support and engagement from the United States and others if it is to survive its first attempt at democratic governance. President Mohamed Morsi is not interested in hearing mandates from the United States, but he may very well find that the United States can help to broker a political deal that he will need for his presidency to endure.

Likewise, if the United States believes it can maintain its interests in the Middle East and remain aloof from the success or failure of the Egyptian political system, it is deeply mistaken. Both U.S. strategic interests and U.S. political values are unavoidably interwoven with Egypt’s political trajectory. In addition to extensive U.S.-Egyptian military and strategic ties, Egypt’s diplomacy on the issues of Palestine, Syria, Libya, and Iran can go a long way in support of key American interests. Most importantly in the long run, however, is the broader demonstration effect that the Egyptian regime transition will have on other Arab countries that are and will be experimenting with political transitions over the course of the decade. Renewed authoritarianism, aborted pluralism, political unrest, crime, and violence in Egypt will alter the calculations of other Arab leaders as they negotiate new social contracts with their populations. If opportunity for meaningful political change in Egypt is squandered, those losses will extend far beyond the country’s borders and threaten positive changes elsewhere.

Current relations between Egypt and the United States face many challenges, however. American enthusiasm for the Brotherhood’s electoral victories was always tepid, but American frustrations with Morsi’s rhetoric and political decisions have continued to mount. A political controversy over American NGOs in Egypt is symbolic of increasing anti-Americanism and the lack of trust on both sides. Likewise, the Brotherhood faces pressures from Salafists to avoid policies that might be construed as pro-American. Popular support among Egyptians for the United States has significantly declined over the last two years as different groups of Egyptians appear to blame the United States for much that has gone wrong in the country (either because it has facilitated or opposed the Brotherhood’s transition to power). The principal response to these challenges on both sides has been to try to quietly engage in normal diplomatic relations, and for the United States to provide measured support to economic and civil society actors, a pattern that does not reflect either the immediacy of the country’s challenges nor the stakes associated with failure.

It is time for the United States to invest the level of diplomatic energy in Egypt that both the timing and the stakes demand. In particular, the United States must aggressively work with three groups of political (not just social) actors in Egypt to further the potential for a transition to political stability and good governance: the president, the military, and the opposition. The objective of that engagement should be a clear and unequivocal message that these three parties must come together to build the political institutions that can revive popular confidence in the political process and bring investment and tourism back to Egypt as quickly as possible. This means treading into the uncomfortable waters of brokerage between political groups, with the backbone to use existing American leverage on aid and military support to facilitate a political deal.

American messaging can help Morsi return to an earlier iteration of the Muslim Brotherhood’s political intentions, which was to enable a diverse set of political actors to play a role in governing Egypt. Morsi has, to his dismay, discovered that getting things done in the face of opposition is difficult, and his initial moves to consolidate power away from the control of opponents proved ill advised and diminished his popular legitimacy. By taking a firm position in support of political pluralism, the United States can provide Morsi with the excuse he needs with his own constituents to credibly open the system to a broader set of actors. The United States also needs to leverage its existing relationship with the Egyptian military to prevent a coup d’etat and to enable the military’s support for a political deal that will necessarily diminish the officers’ political and economic influence in the long run. Finally, the United States should work aggressively to help craft a political resolution that the most relevant groups in the Egyptian opposition could support. This means both understanding the legitimate grievances of opposition actors but also persuading them that it is in their interest to resolve the current political deadlock. The United States is one credible actor that can help ensure that aggrieved opposition parties have a constructive role to play in subsequent elections, and both the government and the opposition need the United States to play that role.

To date, U.S. diplomats have been directionally correct in thinking through Egypt’s economic and political needs; however, they have been far too timid about getting their hands dirty in direct, iterated, diplomacy with key political actors. Secretary of State John Kerry’s visit to Egypt in early March highlighted sensitivity to Egypt’s challenges and to the importance of the relationship, but it failed to assert a clear path forward that the U.S.-Egypt relationship now requires. Kerry’s acknowledgment in Egypt that “we’re not here to interfere…we’re not here to urge anybody to take one particular action or another” is illustrative of understandable American caution in the face of increasing anti-Americanism, but also of a misunderstanding of the urgent need for U.S. support in enabling a political resolution.[1]

There are some risks associated with such assertive diplomacy, including aggravating accusations of American interference in domestic affairs, or a deterioration in the already strained relationship with Egyptian leaders. Anti-American sentiments in Egyptian politics may increase in the short-term due to suspicions over U.S. intentions and fear that U.S. interests are being pursued in opposition to those of the Egyptian people. However, the risks of doing too little and of thus failing to resolve the current Egyptian political crisis are much more severe. Sustained political instability in Egypt is creating deep economic pain and political cynicism in Egypt, which will have negative ripple effects throughout the Arab world and harm U.S. interests throughout the region. Perceptions of U.S. intentions in Egypt are already very low, and are more likely to rise than fall through a concerted diplomatic investment in the democratic stability of Egypt. We can’t expect that U.S. brokerage efforts in Egypt will lead to a universally satisfactory political outcome, but there are currently few places to go but up.

Perhaps now more than ever, the interests of the United States should be aligned with the interests of the majority of the Egyptian people, who desperately seek a civilian, democratic government that can provide stable service provision, enable investment, and serve the ideals of the 2011 revolution. The United States is one of the only international actors with the experience and political leverage to effectively support the consolidation of a new political contract in Egypt. If such a contract fails to appear, the consequences are dire, not only for Egypt, but for the United States as well. Both the Egyptian government and the Egyptian people need to believe that the United States is fully invested in their country’s success. If there has ever been a time to interfere by facilitating a brokered political resolution in Egypt, that time is now.