An Egyptian Reset on Gaza 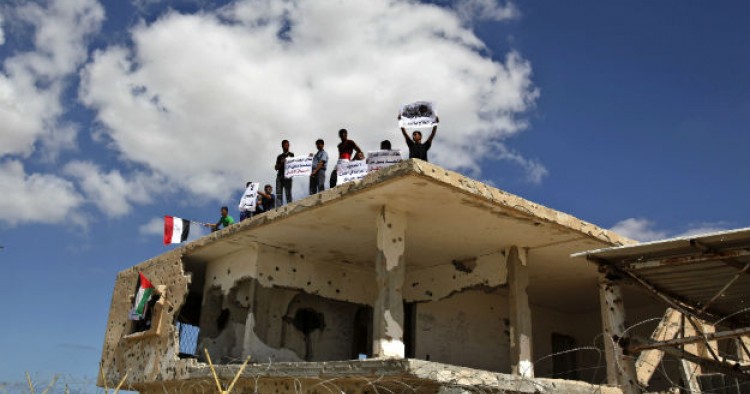 The enormous costs exacted on Palestinians in Gaza by Israel’s Operation Protective Edge have sparked a rocky rehabilitation of Egyptian attitudes toward Palestinians among Egypt’s political class and the public at large. Consequently, the Sisi government may see the merits of moderating the hardline approach to Gaza that has characterized Egypt’s polices since the ousting of President Mohammad Morsi one year ago.

Discussions between Egypt and Other Concerned Parties

Egypt’s postwar proposals to Israel and the Palestinians are based on two fundamental principles: first, that Israel, as the occupying power, has primary responsibility for Gaza’s welfare, and this must be reflected in any understandings; and second, that Hamas’s role in Gaza border operations be minimized. Cairo recognizes the need to open Gaza’s borders, with both Egypt and Israel facilitating the movement of people and goods, subject to "on [the] ground security conditions."[1]

The most recent indirect discussions, led by an experienced team of Egyptian security officials, have aimed at producing a “permanent and comprehensive” agreement to enable Gaza’s reconstruction and economic rehabilitation. On August 11, all parties were reported to have agreed to the following conditions:

1. Allowing Gaza fishermen to fish 12 nautical miles from shore.
2. Increasing to 250 the daily number of trucks importing goods via Israel to Gaza.
3. Increasing to 500 the number of monthly permits granted by Israel to Gazans to pass through Erez crossing.
4. Allowing money to be transferred from the West Bank to Gaza via the Palestinian Authority.
5. Opening the Rafah crossing with Egypt to the passage of people.
6. Freeing prisoners belonging to Hamas who were rearrested after being released in the Gilad Shalit exchange.[2]

A similar readiness in principle to address border issues also appeared in the understandings that led to a ceasefire between Israel and Hamas in 2012, but measures to open Gaza’s borders to free trade and transit were never seriously addressed.[3] To make matters worse, Sisi closed the tunnels linking Gaza to the Egyptian Sinai; they had been open during Egyptian president Mohammad Morsi’s short tenure and had sparked something of an economic revival among the 1.8 million impoverished residents of the Gaza Strip. Since the closures, Palestinians have been left without any route to trade with the outside world.

The antipathy toward Gaza, Hamas, and Palestinians in Egypt has been fairly widespread and virulent since Morsi’s ouster. Hamas’ links, both real and imagined, with the ousted Moslem Brotherhood, and the view that Gaza’s ties with the insurgency in Sinai pose a genuine security threat to Egypt have been dominant in molding both public and official perceptions.

“You have two occupations: Israeli occupation and Hamas occupation. Hamas is the reason for what’s going on now,” explained Ahmad Moussa, a program host on an Egyptian pro-government station, weeks into the war.[4]

There are encouraging signs, however that the regime-inspired demonization of all things Palestinian may be cooling and with it the unprecedented polarization that has made sympathetic treatment of Palestinians, particularly in the Egyptian media, a taboo.

During the first days of the war, several Egyptian political parties and revolutionary movements -- the Constitution Party, the Egyptian Social Democratic Party, the Strong Egypt Party, the Egypt Freedom Party, the Nasserist Popular Current, the Revolutionary Path Front, and the Popular Socialist Alliance Party, all of whom had worked to oust both Mubarak and Morsi -- met to frame a common policy regarding the hostilities in Gaza. They issued a joint statement in which they condemned Israel and demanded that Egypt open the Rafah crossing permanently.

"We are calling on the president and the Egyptian government,” declared the statement, “to adopt honestly the Egyptian people's position on the Palestinian cause and to open the Rafah crossing, not only because of the attack but permanently.” Opening the Rafah crossing, it continued, should be above political considerations. Doing so permanently “will not stop Egypt from taking precautions to secure our national security.”[5]

This modest statement is a far cry from the Muslim Brotherhood’s demand for Arab military support for Gaza issued during the fighting. But the reasoned demands put forth by this coalition reflect the realization that notwithstanding Hamas’ severe and continuing problems in Egypt, there remains a reservoir of Egyptian sympathy for Palestinians, especially when they are under fire from Israel.

The joint statement was followed by isolated efforts during the war to demonstrate both popular Egyptian support for Palestine and to send humanitarian assistance across the border. Egypt’s secular opposition may well want to capitalize on these sentiments and establish leadership on the Palestine issue that Sisi has thus far rejected, both for its own sake and also to enhance the political presence of the opposition on the domestic political scene.

Since the ouster of Mohamed Morsi in 2013 and the outlawing of the Egyptian Muslim Brotherhood, the Palestine issue has been a poisoned chalice on the Egyptian scene in large part because of Hamas’s role in Palestinian affairs. The Sisi government has tried to marginalize Hamas and to maintain its hard line against significant changes on the Gaza border, but this approach may be ending. Palestine may instead be becoming a positive “wedge issue” that increases rather than jeopardizes the popular support of its local Egyptian champions.

Easing the Siege on Gaza

Sisi himself is not averse to easing Egypt’s Palestine policy, particularly if Israel’s responsibility for Gaza’s well being is recognized and the powers of a Palestinian technocratic government in Gaza are enhanced. Despite his hard line, his government is drawn to Palestine, just as other Arabs are drawn to Egypt because of this association. Foreign leaders anxious to end the war beat a path to Cairo, not to Amman or Doha. Sisi’s broad effort to associate his leadership with Nasser’s also inevitably raises the precedent of Nasser’s support for Palestine and the opportunity that leadership of that cause provides for Sisi today.

Egypt is leading the efforts of the Arab League in this direction. Prime Minister Ibrahim Mahlab has declared Egypt’s rejection of what "our brothers in the [Gaza] Strip are being subjected to. [Egypt] will continue to present sacrifices for the Palestinian cause, which is surely the primary cause for Arabs."[6]

A statement issued by the Arab League on August 11 reaffirmed support for Egypt’s leadership on resolving the crisis. "The League council invites Egypt to continue its efforts to cement the ceasefire into a lasting truce between the Palestinians and the Israelis, and resume Cairo-brokered indirect talks to reach a final agreement that puts an end to the Israeli aggression on Gaza."[7]

Championing an Arab interest in the battle with Israel still strikes a popular chord that resonates well beyond Cairo to an otherwise fractured Arab world.

Diplomatic efforts over the past weeks demonstrate that Egypt remains the most effective mediator between Israel and Hamas. Other pretenders -- Turkey, Qatar, the UN, Washington, or Brussels -- simply cannot compete with Egypt’s natural advantages. Over the years Cairo has established an experienced team of experts with intimate knowledge of the issues. It maintains authoritative channels of communication with Hamas’ political and military leaders and a secure, well-regarded relationship with the Israeli Ministry of Defense team led by Amos Gilad.

Sisi has not changed his mind about Hamas, and his government has no interest in rehabilitating the movement’s fortunes, which would certainly improve if the siege were ended.  But it is also true that Egypt also has no interest in supporting what a Hamas official describes as Gaza’s “slow death” from a continuing siege, an inherently unstable situation that risks distracting Cairo from its urgent domestic agenda and that may increase the very real national security threat based in Sinai.

Sisi’s political opponents across the political spectrum are signaling recognition of the domestic political value of supporting a loosening of Egypt’s stranglehold on Gaza. Sisi too may also come to see Palestine as a platform from which he can build both broad domestic and pan-Arab support for his leadership and help to brighten what has until now been a painful legacy of division and repression.