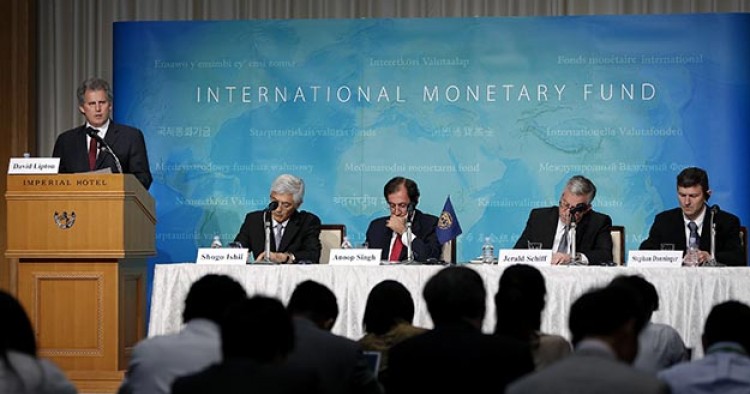 Less than 30 months ago Egypt was brimming with enthusiasm and optimism. Not only had it ended three decades of Mubarak rule, but it had done so essentially peacefully and at the hands of young Egyptian professionals who, it was believed, could walk Egypt toward a freer and more prosperous future. Today, the country is politically polarized and it faces the worst economic crisis since the 1930s. A severe sense of frustration and dark pessimism prevails throughout the nation. Expectations may have been unrealistically exaggerated, but amateurish and unscrupulous political and economic mishandling of the transition is the root cause of the dire state of affairs today.

As the political debate continues, Egypt's economy has seen its major revenue sources such as taxes, tourism, exports, and investments decrease substantially. At the same time, its expenditures have increased with significant outlays to energy and food subsidies. Consequently, its foreign currency reserves in two years have decreased by over 60 percent, from $37 to $13.5 billion, only half of which is in fact liquid.

While Egypt's robust economic infrastructure remains sound, the heightened popular frustrations and diminishing patience on the part of employees have created a sense of volatility that has further diminished investors' appetite and will result in increasingly populous government policies that are unsustainable at the present levels of revenue streams.

Egypt needs cash quickly and is thus pursuing three tracks of obtaining capital: through the sale of government bonds, through sovereign gifts and grants from Arab and Middle Eastern governments, and through negotiating loan agreements with financial institutions such as, but not limited to, the International Monetary Fund. This capital is being used for budget support and to stabilize the Egyptian pound. While by 2012, local debt had reached $187 billion and foreign debt $34.7 billion, further capital injection, if coupled with the necessary reforms, can nevertheless slowly pave the way to economic recovery. However, the political environment must stabilize in order for the country's economic engines to function optimally. Time is of the essence as stagnation is vigorously eroding whatever remaining resources are available and government procrastination is further diminishing what little credibility the decision makers have with the public or with new investors.

Sovereign financing is a short-term fix for the Egyptian economy and has fewer immediate political consequences. It does, however, tend to fuel economic procrastination, and if imbalanced can create an unhealthy political dependency on other countries. A deal with the IMF, on the other hand, is a bitter but probably necessary pill if Egypt is to get the bill of health or at least the proper economic protocol to encourage foreign and domestic investment, as simply focusing on short-term liquidity issues is not a sustainable solution.

In order to secure financing from the IMF, the Egyptian government will have to implement a package of sweeping reforms. Firstly, the Egyptian pound has already seen a 20 percent decline in value since the revolution, in line with the IMF’s condition of devalued currency. Secondly, the IMF is keen to target a regressive subsidy system that currently accounts for 48.3 percent of government spending. The third key demand of the IMF is a commitment to reform the taxation system, transitioning it to a VAT-like tax on sales and purchases and a more progressive system of income tax rather than the current flat rate system.

While sovereign loans could cause serious issues in the long run, the reforms demanded by the IMF pose a more immediate risk for further unrest and political upheaval. Usually a devaluation of the local currency encourages exports, but several issues such as the liquidity crunch, security concerns, energy shortages, and political volatility are curtailing production capacity; this means that devaluation alone may safeguard market share but will not be enough to increase exports to any great extent. Consequently, the cheaper Egyptian pound will only speed up the decline of foreign reserves and make the current debt burden even more expensive to maintain. Furthermore, subsidies are a central pillar of Egyptian society. Any attempt to reform them or indeed abolish them could see a repeat of the violence that occurred during the 1977 bread riots, which followed a similar IMF-mandated abolition of subsidies on basic foodstuffs. The violence was so severe that then president Anwar Sadat was forced to all but abandon attempts at subsidy reform. With this in mind, the politics surrounding a decision on Egypt’s future economic trajectory are more complicated than it would appear at first glance. The government is particularly wary of doing anything that could generate more violence in the streets or lead to a loss of support in the run up to the people’s assembly elections in the fall.

Initial opposition to the current IMF loan proposals began two years ago from the Supreme Council of the Armed Forces (SCAF) when it held power after the revolution, as it did not want to take on the burden of more debt. Now with further debt as a foregone conclusion, opposition comes primarily from Salafi parties because of their opposition to fixed term interest borrowing. More muted is the secular opposition, which is split on the issue because of the positive and negative legacy of the IMF. All remember Egypt’s previous IMF program in the 1990s; some focus on the positive results, while others stress the difficult belt-tightening measures that were associated with it. Many secularists also do not want to be seen as aligned with the leading party. The Muslim Brotherhood’s political arm and ruling party, the Freedom and Justice Party, has gone from opposing the IMF loan two years ago to supporting it now, but it is nevertheless hesitant to make any meaningful commitments as it looks toward the elections in the fall.

The Egyptian government needs to conclude the IMF deal in the coming month, before the election cycle begins for the fall polls. Otherwise, controversial decisions will be put to one side until the elections are over—whether they occur in the fall or, if they are again postponed, in 2014. The later the decision is taken, the more the Egyptian financial situation deteriorates, raising questions about whether the IMF deal would be enough and in fact putting it further out of reach.