Egypt’s Mahragan: Music of the Masses 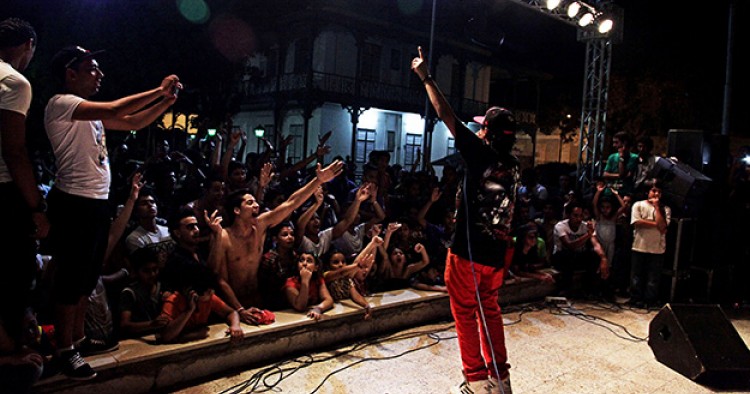 For Egypt’s low-income majority, weddings are the prime source of group entertainment, celebrated like block parties in cramped streets decorated with arabesque tapestries and drenched in colored lights and sound. You won’t hear romantic crooning at these gatherings; in Cairo’s densely-inhabited popular quarters, wedding parties are more akin to raves. The music is raw synthetic beat embroidered with syncopated tabla (Egyptian drum) samples and queasy electronic loops. The voices of the young men in skin-tight jeans stalking onstage around the mixing board are auto-tuned to a sharp metallic edge. Within hours of a big wedding, phone-recorded clips will circulate on the Internet; fame, for some of these singers, may be just a YouTube upload away.

The music is called mahragan (festival or carnival in Arabic). “A colorful word,” says popular cartoonist Andeel, “that people use as slang when they are talking about something extravagant, loud, full of happiness, and sometimes extremely messy.”[1] Percussionist and electronic music composer/performer Mahmoud Refat is the founder of 100Copies, an alternative music label at the vanguard of the “electro-chaabi” [sic] scene, as it now known internationally. “[Mahragan] is not pretty,” Refat says, “but it’s real.”[2]

Mahragan is also pervasive, issuing from Cairo’s cafes, taxis, tuk-tuks, and the speakers young males attach to their motorbikes. Some people hate it because it’s jarring, especially compared to the usual fare of lavishly orchestrated ballads or the prim chigga-chigga beat of sentimental Arab pop songs. The boisterous sound of mahragan with its street-wise lyrics appeals to Egypt’s youth, a major demographic whose existence prior to the 2011 uprising was all but ignored.

According to official figures, over half of Egypt’s 20 million citizens aged 18-29 live in poverty, and among those aged 15-29 the unemployment rate is 77 percent.[3] “These kids know there are people much richer than them who don’t like them and think they are disgusting,” remarks Andeel. “They respond with insanely annoying music.” The distaste mahragan elicits in some quarters may reflect a general uneasiness regarding the fact that today’s underprivileged youth represents Egypt’s future.

Often associated with the 2011 uprising, mahragan actually emerged in 2006 when “mic-man” (MC) Sadat, DJ Figo, Amr Haha, and several others started working from home using cheap Chinese mixing decks to make electronic music for weddings. According to Sadat, who lives in Salam City, a Cairo housing project built to accommodate 1992 earthquake refugees, “not all Egyptians are part of the revolution—the slum areas until now are not interested in anything other than eating. If these masses started to move it would get messy.”[4]

The revolution nonetheless had what Mahmoud Refat calls “a promotional effect” on Egypt’s music scene that made “the masses want to listen to what was new; what was different; what was young and what was coming from the streets…There was a whole other life going on that hadn't previously been exposed.”[5]

Mahragan is sometimes described as an Egyptian version of rap, but it is the digital age descendant of the 1970s sha‘abi (“music of the people”) songs of working class woes, of loves and jobs lost. Bawdy and festive, sha‘abi helped boost the national mood in the wake of Egypt’s 1967 defeat by Israel. It was the dawn of the cassette era in Egypt, and sha‘abi spread freely on bootlegged tapes. The Internet has allowed mahragan to go much further, as both a means of production thanks to free downloadable software, and of promotion and distribution via YouTube, SoundCloud and Facebook. Like sha‘abi, mahragan offers young Egyptians some much-needed cheering up, especially against a background of repressive security tactics that rival those of the Mubarak era.[6]

The lyrics of mahraganat (the songs) reflect common concerns like relationships and a lack of ready cash. Cuts from The Best of Sadat & Alaa Fifty Cent include “My Life Full of Sins,” “A Friendship I Regret,” and “The People Demand Five Pounds Credit,” a sardonic take on the revolutionary chant “the people demand the fall of the regime.”[7] The songs about girls deal less with romance than marriage-related problems, like establishing the perquisite household despite the dearth of affordable housing. No apartment means no marriage and consequently little or no sex for many young men until their late twenties or early thirties.

Sadat calls mahragan “pure energy,” but pure yang is more like it; it’s all about the boys. The athletic dance style it has generated combines the graceful curving movements of oriental dance with Cossack kicks and back flips. Wedding parties are virtually the only place where kids—both male and female—can dance their hearts (and pent-up energies) out.[8] For a city its size, Cairo has few live music or dance clubs, and fewer still that these young men could afford.

Weddings in Cairo’s popular quarters are segregated. Men and women can talk, but they have separate seating—and dancing—arrangements, men in the front of the stage and women tucked back behind or beside it. Ahmed Suessi, a 20-year-old mahragan singer, looked shocked when I told him that 20 years ago people mingled freely at weddings. He showed me a YouTube clip of a recent wedding in which boys thronged the stage so tightly they could only bounce together up and down. “I wouldn’t want my sister in there,” he said. “Girls would get harassed.”[9] The widespread harassment phenomenon inspired Sadat’s song “I May Catcall but I Don't Grope,” whose chorus says, “if you are a real man, protect, don't harass.”

Recently signed by 100Copies, Suessi grew up in a village outside Suez listening to Qur’anic recitations and Sufi chants. His father noticed his talent and made him practice to develop range and flexibility. In the cool, focused setting of the 100Copies recording studio in downtown Cairo, Ahmed sits with Mahmoud Refat and DJ Figo, a seasoned producer at age 24, who mans a massive mixing board topped with several computer screens. Refat is clearly a trusted impresario: knowledgeable, encouraging, and connected. He has established networks linking Egyptian, regional, and international musicians while engaging support from organizations like the British Council and the French Cultural Center to showcase local musicians at home and abroad. Sadat has performed to enthusiastic crowds in London’s Hyde Park, and this year Ahmed Suessi will do a mini-tour of Europe’s dance clubs.

Mahragan is evolving in the studio, where a cleaner, more complex mix is possible, and its audience is meanwhile growing. The performers are local heroes whose profession, like soccer players’, is seen as a window to the world of success and celebrity. With the help of social media, the genre has helped spawn fashion fads like “famous,” in which boys with gravity-defying hairstyles post professional photo portraits online to attract attention. “I’m not even a singer,” says a star of the “famous” scene, whose Facebook fans number in the tens of thousands.[10] Electro-chaabi sounds have been co-opted in ads for mobile phone carriers, soft drinks, cars and, unsurprisingly, hair gel.

The music’s success, says Refat, is a matter of “influencing as well as being influenced by your own culture.”[11] In a culture of deprivation, mahragan holds a powerful resonance for Egypt’s disadvantaged youth, an otherwise voiceless segment of society that is determined, one way or another, to make itself heard.

[1] Andeel, “You’ve Just Got Mahraganed: There’s No Getting Away from the Sound,” Mada Masr, September 22, 2013, http://www.madamasr.com/sections/culture/you-just-got-mahraganed.