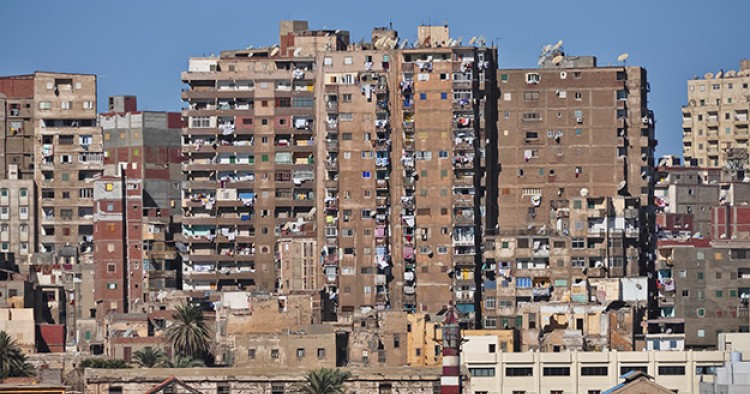 In March 2014, before resigning as Egypt’s minister of defense and pursuing his campaign for the presidency, General Abdul-Fattah el-Sisi announced an agreement with the UAE construction firm Arabtec to build a million affordable homes for “Egyptian youth.” The Egyptian Army facilitated the deal by pledging to donate 160 million square meters of land in 18 locations nationwide. Although Arabtec had never handled a project of this scale or value ($40 billion), one of its largest stakeholders (22 percent) is the Abu Dhabi state fund Aabar. The firm’s letter of understanding noted that the UAE was “very keen to mobilize all efforts to boost support for our brothers in Egypt.”[1] The project made headlines, Sisi was elected president, and Arabtec then fell off the media’s radar.

As a growing source of social discontent, Egypt’s multifaceted housing crisis is an urgent political concern. On the one hand, there is a glut of high-end housing, with over six million units standing empty.[2] On the other hand, there is a shortage of affordable units for those who need them most. With 18 percent of Egypt’s families living in single-room dwellings, the million-unit project was welcome news.[3] The promise that it would produce a million jobs was very welcome news as well. The Army, led by General Sisi, appeared to be responding on a grand scale to the public’s need for affordable housing, with deep-pocketed Gulf allies (Saudi Arabia, the UAE, and Kuwait) on board.

The Gulf states have become increasingly involved in Egypt’s economy since the ousting of Islamist President Mohamed Morsi. Their support—in the form of interest-free deposits to Egypt’s Central Bank, petroleum products, long-term loans, and grants amounting to a reported $11.02 billion (18 percent of the total foreign direct investment in Egypt between July 2013 and June 2014)—has helped keep Egypt’s economy on its feet.[4]

Gulf monarchies that see political Islam as a threat to their legitimacy were relieved by Sisi’s election. At Abu Dhabi’s “Invest in Egypt” conference in November 2014, Sultan Ahmed al-Jaber, the UAE minister of state, affirmed that “Egypt’s economic stability is a must.”[5]  As a sign of Gulf involvement in the economy, the Arabtec deal inspired confidence in local markets. “We’ll see similar deals in the coming period, in energy, oil and gas, or roads,’” said Karim Awad, co-chief executive of EFG-Hermes, Egypt’s largest investment bank.[6] With the recent dramatic downturn in oil prices, some in Egypt are wondering if this Gulf enthusiasm might decline.

Egypt’s low-income housing shortage has historically generated more rhetoric than action. In the run-up to the 2005 presidential elections, former President Hosni Mubarak announced a 500,000-unit low-income housing project that as of February 2014 had delivered 360,000 units. Around 50,000 of these remain unconnected to utilities grids and are not useable, according to Yahia Shawkat, architect and housing expert for the Egyptian Initiative for Personal Rights (EIPR). Meanwhile, 40,000 Egyptians who applied for units and made a 5,000 EGP ($700) down payment have yet to receive their houses. “That’s 200 million EGP [$28 million] from Egypt’s poorest families that the government basically sat on for eight years collecting interest,” Shawkat said. The people protested and were told to apply for the more recent Social Housing Project, but the criteria are different and many may not qualify.[7]

The Social Housing Project (SHP), initiated in 2011 by then Minister of Housing Mohamed Fathy el-Baradei, promised a million units for low income households, that is, those earning between 1,400 and 2,500 EGP per month (between $200 and $350). Successful applicants for the 70-square-meter units, priced at 135,000 EGP ($19,000), would receive a cash subsidy of 25,000 EGP ($3,500) and be given a 20-year mortgage at seven percent interest. These terms, however reasonable, place the homes out of reach for the 20 percent of Egyptians who make less than 1,400 EGP per month. “‘Low income’ does not include the poor,” says Shawkat. Moreover, 60 percent of Egypt’s work force is employed in the informal sector and consequently ineligible for SHP units, since they cannot prove their salaries. Further, to meet its target, the SHP would need to build 200,000 units per year but has produced only 50,000 and delivered around a thousand so far.[8]

In October 2014, six months after Sisi’s original agreement, a revised version of the Arabtec project was back in the news, with phase one involving the production of just 120,000 units. Instead of the Army donating the land, the New Urban Communities Authority (NUCA), under the auspices of the Ministry of Housing, would allocate land in exchange for a percentage of the units Arabtec builds. Aside from having to compensate NUCA for the land, Arabtec is responsible for financing the project through foreign banks and will have to generate feasibility studies. In order to obtain financing, the project must be profitable. Estimates suggest that given the added cost of land, the units’ price will again be out of reach for Egypt’s poor.[9]

Yet another recently announced state housing project, Dar Masr, consisting of 160,000 middle-income homes, will directly compete with Arabtec. Since only 300,000-500,000 units in this category are sold each year, the notion that one developer, whether Arabtec or Dar Masr, can profitably produce 200,000 annually is unfeasible.[10] At this writing, the Arabtec project details, from design to financing, remain far from concrete.

In whatever form it eventually materializes, the “million-unit” Arabtec project demonstrates that while the state has taken steps to provide more housing for middle-income Egyptians, low-income housing solutions are still needed. No one has succeeded in tackling this problem more directly than the Egyptian people themselves. While the SHP produced 50,000 units between 2012 and 2014, informal (unlicensed) housing in Egypt’s ashwa‘iyyat (unplanned areas) increased by at least two million flats in that same period.[11] Especially since 2011, in the absence of state supervision, construction of informal housing has increased to such an extent that licensed developers have encountered shortages of building materials for their projects.[12]

Living conditions in the ashwa‘iyyat are far from ideal. Construction costs for these no-frills brick dwellings are around 200-300 EGP ($28-$42) per square meter, a budget that excludes design or finishing.[13] Built on unplanned land, the individual units are randomly integrated into larger neighborhoods lacking adequate utilities and serviceable streets. Most importantly, they have consumed vast tracts of arable land, diminishing Egypt’s already short supply.[14]

In the absence of viable alternatives, informal quarters will continue to multiply, a reality the state is beginning to acknowledge. In October 2014, the Egyptian cabinet approved an initiative to issue long-term, low-interest loans of 30,000 EGP ($4,200) for finishing informal buildings. According to Minister of Housing Mostafa Madbouly, obtaining the loans would not require proof of building ownership, a logical reprieve since Egyptians living in informal housing, by definition, lack such documentation.[15] The terms described in the Arabic press, however, based on a Ministry of Housing statement, call for proof of both the applicant’s ownership of the property and monthly income.[16] It is thus unclear when or how these loans, which would effectively endorse informal building on agricultural land, will be made available.

Most Egyptians, whether in planned or unplanned areas, do not hold titles to their properties. This prevents them from applying for mortgages and severely restricts the mortgage market growth, currently equivalent to less than one percent of GDP. Experts agree that the only way to end the housing crisis is to deal with the issues of mortgage finance, a project that has made some headway in the last decade with the help of the World Bank.[17] But suitable land on which to build remains at a premium. For now the largest tracts of infrastructure-equipped land are in the so-called new cities in Cairo’s desert environs—remote and unaffordable options for low-income families.

Egyptians are accustomed to fending for themselves when it comes to putting a roof over their heads, and with population growth and urbanization proceeding at a rapid pace, a continued lack of affordable housing will not slow them down. But unless the state’s approach shifts to more carefully considered ventures involving infrastructure-equipped land and accessible mortgage finance, its current efforts at housing production are likely to exacerbate rather than alleviate Egypt’s growing housing crisis.

[2] A 2013 study from the Egyptian Center for Housing Rights estimated that more than 6 million units are not in use, mostly in the greater Cairo area. “Forget the Arab Spring, is Egypt Facing a Real Housing Crisis?,” Albawaba, February 28, 2014, http://www.albawaba.com/business/egypt-housing-market-557799.