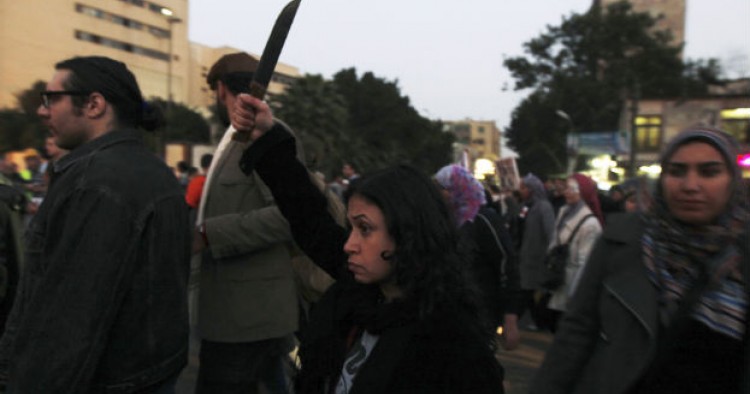 A few days ago, heavy court sentences were imposed on seven men who were convicted of attempted rape, attempted murder, and torture, in a ruling seen by many as unprecedented in Egypt. In the words of one activist, the verdict was “a strong message to all harassers that their actions are no longer tolerated or accepted.”[1]  This comes in the wake of the government’s vows to combat the problem of sexual harassment; a new law passed last month criminalized sexual harassment for the first time.

The law had been issued by interim Egyptian president Adly Mansour two days before he handed power to president elect Abdel Fattah al-Sisi.  Egypt’s government-affiliated National Council for Women welcomed it and expressed hope that it would eliminate the “shameful phenomenon” of sexual harassment.[2]

But other women’s and human rights groups, including Nazra for Feminist Studies and the Nadeem Center for the Rehabilitation of Victims of Torture, had proposed a comprehensive series of amendments to bring the law on sexual violence in line with international rights standards.[3] Despite the recent court ruling, which would have been unthinkable even two months ago, the new law does not address many of their concerns.

Although sexual harassment has been an endemic problem in Egypt for years—in 2013 the UN found that 99.3 percent of women in Egypt experience harassment and a Thomas Reuters Foundation survey ranked Egypt as the worst country in the Arab world to be a woman—there has been very little public discussion on the topic, and the state has typically denied the breadth and severity of the problem.[4]

The new law[5] amends article 306A in the penal code to criminalize harassment in the form of words, gestures, and actions expressed in person or through other means of communication. The law lays out a minimum sentence of 6 months imprisonment and a fine of 3,000 Egyptian pounds for an offence. A second amendment to the law stipulates a more severe sentence for an offender who is in a position of authority over the complainant and for offences involving multiple perpetrators.

Women’s and human rights groups have many reservations about the new amendment.  A principal shortcoming is that it defines key concepts narrowly.  For example, harassment is defined as an offence that occurs when a man follows or stalks a woman and communicates sexual or pornographic content. This is problematic because the definition makes the crime conditional on following or stalking, neither of which are necessary for harassment to occur (lewd comments made to a pedestrian from someone in a passing car, for example, would not be considered an offense under Egyptian law). Nor does the definition take into account the sexual harassment of men, which is widespread.

The law defines the crime of harassment as motivated by the sexual desires and fulfillment of the offender. But as lawyer Mostafa Mahmoud of Nazra said in a June press conference, there are many different kinds of motivation behind harassment—shaming, assertion of power, or even (in a culture where sexual harassment is largely unpunished and sometimes even encouraged) boredom. Sexual violence in Egypt can also serve a political purpose: to discourage women from political participation.[6] The law encourages decision makers to focus on the subjective question of the defendant’s motivation, rather than the harm done to the survivor.

The law regarding rape has also been heavily criticized by human rights lawyers and activists. The legal definition of rape in Egypt is restricted to nonconsensual penile penetration by a man of a woman’s vagina. Nonconsensual penetration using hands or instruments, as well as penetration of the anus or other areas of the body, are therefore not acknowledged as rape. The law also excludes and overlooks rape and other forms of sexual violence against men.

Implementation: The Solution is the Problem

At least nine women were sexually attacked by a mob in Tahrir Square on the day of Sisi’s inauguration in early June. The story made the front page of most of the country’s newspapers, and it was discussed on several television talk shows. The state response was pure political spin. Sisi publicly condemned the attack, calling this kind of violence “foreign to Egyptian society” and describing the attacks as unprecedented. He visited one female survivor of the attack and, with much media coverage, apologized to her on behalf of Egypt. Government officials used the attack as a pretext for more policing.

This narrative is dangerously deceptive because it essentially denies what is now a clearly documented two-year history—from the fall of 2012 until the present day—in which protests and rallies in Tahrir have been consistently plagued by mob attacks of this nature.[7] The streets and other public spaces are neither safe nor comfortable for women. Sexual harassment and assault in various forms are part of the daily calculus that women in Cairo consider and experience, often to a greater degree than women in other cities.

The state’s use of the threat of sexual harassment as an excuse to increase police activity is all the more offensive because the police are known for their unprofessional conduct in sexual offense cases. They re-traumatize women who file complaints of harassment or assault by asking suggestive questions, teasing survivors about the incident, and blaming them for what they were wearing or for being in the wrong place when  the assault occurred. Police officers have also suggested that women filing assault complaints undergo vaginal examinations, which are often conducted in inappropriate settings and without a medical professional present.

Police frequently violate the privacy of survivors by releasing their names and personal details to the defendants and the media. This often results in an extreme amount of pressure being brought by the defendant’s family and friends, who will sometimes appear at the home or workplace of the survivor and use tactics ranging from emotional appeals to threats to try and persuade survivors not to pursue court cases.

Ultimately, as some researchers have pointed out,[8] the entire rationale behind legislation and court rulings on sexual violence is flawed. The law does not acknowledge an individual’s right to bodily integrity and freedom from harassment and abuse. Rather, the language employed on the books and in court rulings focuses on the importance of public morality and maintaining the integrity of the family unit. It is no wonder, then, that only heterosexual rape—which introduces the possibility of pregnancy—is criminalized, and that survivors who press charges are urged to consider the effect of the charges on the perpetrators’ family life.

In light of this well-documented record, it is essential to completely reform the way in which the police deal with sexual violence. This would require the government to take responsibility for the behavior of the Ministry of Interior staff and to acknowledge that the attacks in Tahrir are not exceptional incidents.

None of this can be viewed in isolation from the wider political condition, in which sexual assault is used as a tool to discourage female participation in public life and—as international human rights groups have documented—sexual violence and torture are widely used by police against detainees.[9] The government’s proposal to solve the problem with greater policing is consistent with the state’s assault against dissidents and its encroachment on all space for public responses to crises and problems.

Volunteer groups and rights organizations have launched admirable grassroots efforts to protect women in public spaces. [10]  What is urgently needed are state measures that truly step up to the challenge, and also address the cultural and social dimensions of this crisis. If the state is serious about combating harassment, it will have to acknowledge the full scale of the problem, as well as the complicity of security forces and other state institutions in harassment and sexual violence on a wider scale. Legislation alone is not enough.

[3] Feminist and legal organizations ask the president to propose transparent legislative projects to fight violence against women that are based on real public discussion." (Arabic) Joint Statement. April 1, 2014. http://nazra.org/2014/04/منظمات-نسوية-وحقوقية-تطالب-الرئاسة-بطرح-مشاريع…