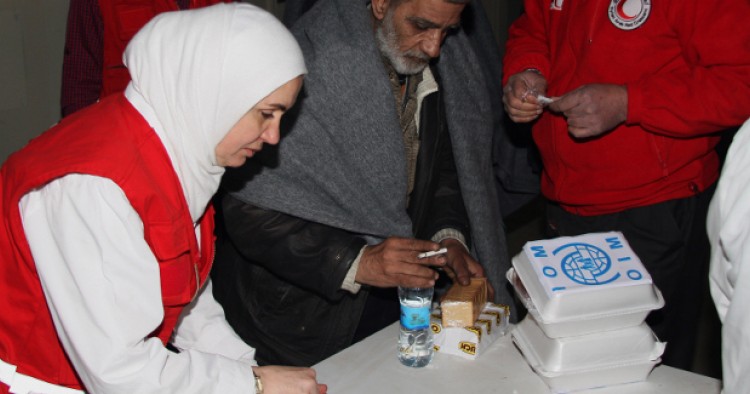 Five years of war have unexpectedly reset gender roles in Syria. With so many men killed or missing, women are finding themselves the main supporters of their families and communities, and are often breaking with tradition and cultural taboos.

“Activists that engaged with the revolution have experienced big differences in gender relations, especially among the most conservative women,” said a 30-year-old underground activist and filmmaker in government-held central Damascus. She goes by the name Rafia, and she spoke to this author by Skype.

“It’s become normal for them to have male colleagues, to live on their own. Many have become feminist activists and leaders of projects,” she said.

Rafia recalls becoming involved with the Syrian uprising from the very beginning, when she partook in the early days of peaceful street protests and had “so many dreams for Syria, and anything was possible”.

But as things soured, activists like herself were either killed, imprisoned, or have since gone underground. Yet despite the harsh reality and the state of heightened paranoia in Damascus, a nascent movement of women’s liberation is taking shape, she says, and it is steeped in the principals of revolution.

“From the start, the women were told not to raise their voices during protests, not to become involved in such and such activity because of worry about them being kidnapped, detained, or raped,” Rafia says. “But the women who continued their activism, they’re shattering so many cultural limitations.”

A film titled When I Heard My Voice for the First Time, produced by Rafia’s fellow activists, captures this sentiment.

“Perhaps the protests liberated me from a whole era of silence regarding my rights inside the home and outside,” says one of the women interviewed in the film.

“My voice was very low at first, but it got louder and louder. Then I felt the meaning of freedom ... a feeling I cannot describe,” says another.

The women speak against a whisper in a male voice that says: “Your voice is awra,” the Islamic term for nakedness, something that must be covered, or else it will bring shame if flaunted in public.

Bonnie Morris is a gender studies scholar who teaches courses on women and war. She says it is not unusual for traditional gender roles to be shaken to the core in a time of war, sometimes with lasting effects.

“When men go to war, women often assume men’s roles and are permitted to break rules. They’re able to be strong, or they become warriors to kill or carry weapons, or they take over everyday roles that men have abandoned because men have been kidnapped or jailed,” said Morris, who teaches at both George Washington and Georgetown universities.

She adds that World War II shook gender roles in the United States, and although the changing roles did not take hold immediately after the war, it planted the seed for change a generation later.

In Syria, perhaps such gendered changes are most obvious in the rebel-run parts of Syria, where the ravages of war are stark. The women there face daily bombardment in addition to a shortage of electricity, food, and potable water.

But for 25-year-old Zein, it is all in a day’s work. A native of Aleppo, she decided to remain as the city divided between rebel and regime forces. Like most Syrians, Zein’s family has become dispersed, with siblings in Turkey and parents stuck in rural Aleppo under Islamic State rule. Also like many Syrians, Zein survived a few brutal months in regime custody before she was released. Now, so many things about her life shatter cultural gender norms. She lives alone, which is almost unheard of for an unmarried woman, even before the war. As the head of an all-male team of humanitarian relief workers, Zein is also always out in public, personally delivering aid, even to families stranded in the middle of firefights near the frontline.

“No one wants to go there because there are government snipers. But I insist on going, and the guys give me a ride. But they’re shocked, and so is the family. ‘Wow!’ they tell me.  ‘No one ever reaches here.’ But here I am,” Zein said via Skype from her home in the rebel-held part of Aleppo. She withheld her last name to protect the identities of family members.

She added that it took a while for the conservative community to accept her unorthodox ways. Rebels in Aleppo are among the more conservative, and they include al-Qaeda’s affiliate, Jabhat al-Nusra.

“At first, I found some difficulty. For a woman to be living by herself, to go buy her food just for herself, and to get the cooking gas canister by herself, they looked at me funny,” she said. “But everyone has gotten used to it. And the other women who have stayed here, I feel that they have more awareness, a greater role in society, even if they happen to wear a niqab (face covering), that still does not stop them from being in public places and working despite all the dangers.”

A similar story unfolds in the rebellious Damascus suburb of Ghouta, the sight of a chemical attack in August of 2013 and the subject of an ongoing, government-enforced siege since 2012. A black market provides meager food supplies at exorbitant prices. Women spend hours every day gathering fire wood and fetching potable water from makeshift wells, after government airstrikes destroyed infrastructure and drinking water became contaminated.

Despite these hardships, with most of the men fighting or gone, the women of Ghouta run the community. They have varying degrees of education and professional experience, but by training each other they now comprise over 80 percent of the medical and education cadres.

Maimona is one of these women. Her organization, Herras, Arabic for guardians, supports women, children, and the schools that have remained open despite daily bombardment and, more recently, Russian airstrikes. She and the women she trains have their work cut out for them.

“We see many problems: kids who lost family, or survived physical or sexual or psychological abuse, or they’ve dropped out of school because they have to work to help their family, or they are vulnerable for recruitment as a child soldier, or early marriage, or maybe they have special needs and health problems,” she says.

She adds that so many women in the community play vital roles in running these support programs and—thanks to some funding from international organizations and Syrians living abroad—many local women now earn a living doing this work.

“Maybe it’s a silver lining. This atmosphere is demanding that women shoulder so much responsibility in the absence of men, including outside the house. So now women join job training workshops, they learn new trades and start to earn a living,” says Maimona.

How sustainable these gender shifts might be when the war is over is still up for question.

“It can go either way,” says Morris. Historically, women after conflict can lose ground, like in Afghanistan after the Soviet invasion, in Iran after the Islamic Revolution, and in Ethiopia and Eritrea after the war between the two countries in the 1990s.

“Here in the U.S., women were forced back into the homemakers roles, and there was not much they could do at that time, but there was a generation of women who knew that given the opportunity, they could earn better pay and be good workers. The cat was out of the bag,” said Morris.

“I don’t know in Syria. There might be pressure for women to repopulate. When you have civil war, you also have mistrust. Women can be interrogated. Were you a collaborator? Did you sleep with the enemy to feed your kids?” she added.

But for the women inside Syria, the changes on the ground are real. As Maimona puts it, there have already been too many sacrifices in the pursuit of dignity for all Syrians.

“I do think the Syrian revolution is also a revolution for women, and there is no going back,” she says.