Is Erdogan misreading Putin on Libya? 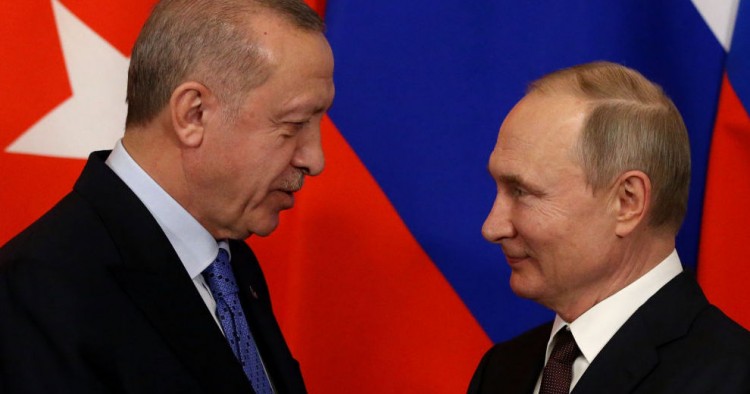 After Turkish President Recep Tayyip Erdogan hammered out a deal with his Russian counterpart Vladimir Putin on March 5 to bring an end to the fighting in Idlib in northwestern Syria, he said he was hopeful that the two countries could extend their cooperation to Libya. Turkey and Russia back opposing fronts in the North African country’s civil war. Turkey has thrown its support behind the Tripoli-based, internationally recognized Government of National Accord (GNA) led by Prime Minister Fayez al-Sarraj, while Russia backs Khalifa Hifter, leader of the self-styled Libyan National Army. Erdogan said he had conveyed Turkey’s unease with Hifter’s military campaign against the Tripoli government to Putin and added that he was optimistic “Putin would take positive steps” regarding the operations of the Kremlin-linked private security company Wagner in Libya.

Erdogan might be misreading Putin, again. Ankara has long thought that Russia would accommodate Turkey in Syria provided the two sides kept cultivating closer ties on other fronts. But tension between the two has been escalating in the last few weeks as Russia-backed Syrian regime forces intensified their operation to recapture the last opposition stronghold of Idlib. The tension peaked after tens of Turkish troops were killed in what many in the Turkish government admit was a Russian airstrike in Idlib. Both parties played down the tension at a meeting in Moscow on March 5, but the killing of Turkish soldiers marks the lowest point in relations between Turkey and Russia since 2015, when Turkey shot down a Russian jet near the Turkish-Syrian border. The Turkish government frames the cease-fire agreement reached in Moscow as a diplomatic achievement, but the deal once again proves that Russia and Turkey have irreconcilable goals in Syria and Russia is willing to do whatever it takes, including killing Turkish soldiers, to make sure its goals are realized.

NATO and the EU

After the recent tension over Idlib, Turkey is in an even weaker position vis-à-vis Russia. When the conflict escalated, Turkey appealed to its NATO partners for help. Turkish requests for U.S. Patriot missile-defense batteries were turned down by the Pentagon, while NATO has so far not offered anything beyond words of solidarity. Turkey angered EU member states with its decision, taken after its soldiers were killed in the airstrike in Idlib, to temporarily stop preventing Syrian migrants and refugees from crossing its borders into Europe. The fact that Turkey has been left to fend on its own by its Western partners in the face of Russian aggression further strengthens Putin’s hand against Erdogan.

Erdogan still expects Putin to withdraw Wagner mercenaries from Libya, but he is likely to be disappointed. Russia hopes to secure access to the country’s energy resources and ports as well as leverage over Europe through its involvement in the conflict. It is unlikely to give that up. Russia deployed mercenaries to Libya in 2019 to back Hifter and is pursuing a sophisticated strategy of playing all sides in the conflict. Despite its financial and military support for Hifter’s forces, Moscow has also engaged the Tripoli government, hosting the GNA Prime Minister Fayez al-Sarraj at a summit in Sochi last October. Russia is also talking to the Gadhafi family, which would undermine Hifter if it manages to become a political force in the country once again. Russian efforts to sow further discord in Libya are deeply concerning to a Europe still deeply traumatized by the 2015 refugee crisis, which sent thousands of people fleeing the conflict in Libya to Europe. That fear provides Russia with leverage, which Moscow is trying to use to ease the EU sanctions imposed after Russian intervention into Ukraine in 2014. Russia has already gained a seat at the Berlin conference on Libya.

A few Russian mercenaries do not afford Moscow enough influence to secure victory for its ally Hifter, but it is enough to scare the Europeans and Turks, which is exactly why Putin might not be ready to extend a helping hand to his fellow strongman in Ankara just yet.