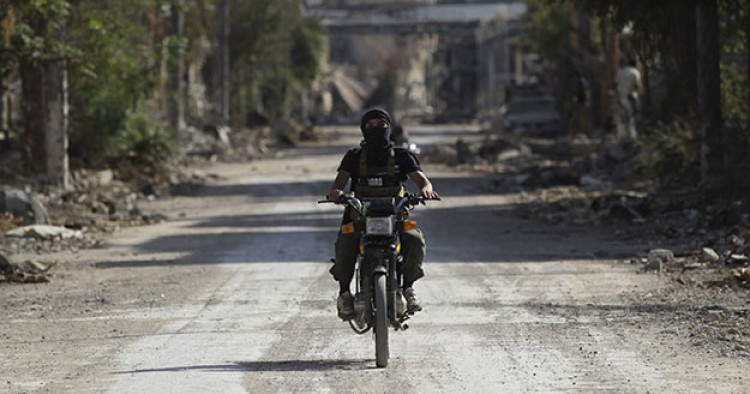 Westerners who have joined the ranks of radical groups fighting in Syria have been likened to time bombs—and in May one of them exploded in Brussels. Belgian police released chilling images from surveillance cameras of the lone gunman’s attack on Brussels’ Jewish Museum in Sablon, a neighborhood of genteel antique stores and chocolatiers. The gunman, wearing sunglasses and a baseball cap, is seen strolling to the museum before removing a semi-automatic rifle from a bag and blasting through the entrance.[1] Four people died in the attack.

The incident added to increasing alarm that as these fighters—most of them European Muslims—return to their home countries, more will detonate, opening up yet another chapter in the long-running war between al-Qa‘ida-inspired jihadis and the West. European governments are struggling to address this problem despite strategies such as intelligence sharing and monitoring local Muslim populations.

Six days after the attack and more than 500 miles south of Belgium’s capital, French customs agents searching for drugs at Marseille’s central bus station chanced upon French-Algerian Mehdi Nemmouche, arresting him after discovering a Kalashnikov and a pistol in his luggage.

If 29-year-old Nemmouche—a onetime petty criminal who prosecutors say became radicalized in France while serving time in jail—turns out to be the Brussels assassin, he would be the first Western volunteer to have fought with Islamic militants in Syria before carrying out a successful attack in Europe. Western governments and intelligence agencies hope that he will be the last, but few are sanguine.[2] Even before the Brussels shooting, concern was mounting at what the blowback might be for Western countries, let alone Syria’s Middle Eastern neighbors, when an estimated 12,000 foreign fighters—at  least ten percent of them Westerners—return from the Syrian civil war.[3]

Retired FBI agent Martin Reardon, a former chief of the bureau’s Terrorist Screening Operations Center, harbors no doubts that there will be consequences for the United States and European countries. “You shouldn’t underestimate the threat,” he says. Most of the Syria-bound young Western Muslims have not joined moderate rebel militias, which are almost exclusively manned by locals. Instead, they have selected foreign-dominated radical Islamic groups such as the Islamic State in Iraq and Syria (ISIS).[4]

Reardon says al-Qa‘ida is always searching for openings that it can exploit to circumvent Western defenses and launch attacks in America or Europe. “The Syria war has offered them an opportunity, and we already know there are senior al-Qa‘ida leaders in Syria. This is a chance for them to identify foreign fighters they can use back in [the fighters’] home countries.”

Intelligence analysts and government officials are not confident about offering a firm estimate of how many of these Syria veterans might turn violent on Western streets. Some point to a study by Thomas Hegghammer, director of terrorism research at the Norwegian Defense Research Establishment, which found that between 1990 and 2010, one in nine Western foreign fighters subsequently became domestic terrorists.[5]

Hegghammer’s study, of course, was published prior to the Syrian civil war, prompting some Western intelligence officials to wonder how foreign fighters who joined Jabhat al-Nusra or ISIS in Syria compare to those who fought in Afghanistan, the Balkans, or Chechnya. Will the one-in-nine statistic apply to Syria’s foreign jihadi volunteers, or will a larger proportion become domestic terrorists?

Reardon notes that even a one-in-nine ratio is worrying. “If only a few of them morph from being a foreign fighter into a terrorist, that will be a big challenge,” he says.

U.S. anxiety about blowback was heightened in May when Florida-born Moner Mohammad Abusalha became the first known American fighter in Syria to undertake a suicide bombing mission against Syrian government troops.  The 22-year-old triggered a truck bomb outside a restaurant in the government-held northwestern city of Idlib. For U.S. officials, one of the most alarming aspects of the incident was that while American intelligence agencies knew Abusalha had gone to Syria, they did not know of his association with ISIS, the jihadi group he joined.[6]

The challenge of knowing which of their citizens have gone off to wage jihad is even harder for Europe’s smaller countries, as they have fewer intelligence resources and a narrower reach. The number of foreign Muslim fighters from Europe in Syria is historically unprecedented—far fewer took off for Afghanistan. While no one claims to have definitive numbers, France, which has Europe’s largest Muslim population of about five million, appears to lead the way, with anywhere from 200 to 700 young French Muslims believed to have fought in Syria. Britain follows closely behind, with 200 to 300, and German intelligence estimates that 200 young German Muslims have rotated through Syria’s front lines. Belgian authorities say that anywhere from 100 to 300 young Belgian Muslims have fought or are fighting in Syria, while Dutch intelligence’s high-end estimate is 100. But the overall and individual country numbers could be much higher.

Indeed, research by the International Centre for the Study of Radicalisation at the University of London suggests that the overall number of European Muslims who have fought in Syria or are still there may be higher than 1,200, perhaps closer to 1,900.[7] A report in May by the Soufan Group, a security consultancy firm, hazards that “3,000 fighters have traveled to Syria from Western countries to fight with rebel groups dominated by Islamic extremists.”[8]

Across Europe there have been a series of cross-border meetings at ministerial and senior intelligence levels to try to coordinate counterterrorism strategies. The focus has been on intelligence sharing, with discussions also delving into the question of what to do with the returnees. Should they be arrested and prosecuted for fighting in a foreign war, if the laws to do so are on the books? Or is it better to monitor returnees, rather than risk further radicalization in jail? Should all returnees be required to go through de-radicalization programs?[9]

The latest cross-border meeting featuring representatives from nine EU countries—Belgium, Denmark, France, Germany, Ireland, the Netherlands, Spain, Sweden, and the UK—came just days after the May attack in Brussels.

These countries’ governments have increased their intelligence endeavors by working with Muslim communities and mosque leaders to discourage recruits from heading out and by trawling social media sites in an effort to identify those who have gone to wage jihad.

In January, the counterterrorism chief of London’s Metropolitan Police appealed to Muslims across the UK to help staunch the flow of young Britons heading to Syria. Commander Richard Walton admitted that authorities are “desperate” to obtain further assistance.[10]

But critics say there are risks in targeting local Muslim communities and pressuring them to collaborate. The effort can come off as McCarthy-like discrimination, further alienating young and disaffected Muslims and presenting recruitment opportunities for jihadis.

In the UK, police have been aggressively using Schedule 7 of the Terrorism Act, a controversial piece of legislation allowing them to detain anyone, even without reasonable cause for suspicion. In 2012 and 2013, 61,145 people were detained under Schedule 7 and questioned without legal representation for the allowed nine hours. Those stops and interrogations resulted in 24 terrorism-related arrests, but the cost has been high in terms of fostering resentment.

“For many Muslims it’s not so much that they have been stopped but the type of questioning that accompanies [it],” says Asim Qureshi, research director of CagePrisoners, a civil libertarian campaigning group. He told Al Jazeera, “For example, they get asked, ‘What type of Muslim are you? What are your foreign policy opinions? What are your views on Palestine?’ None of those questions pertain to whether that person poses a credible risk to UK security.”[11] Schedule 7 is now the subject of a legal challenge in the European Court for Human Rights.

British government officials admit that there has been overreach, but argue that the threat of terrorism is so great that they have little choice but to “break some eggs,” says a UK intelligence official.

France is matching the British in increasingly aggressive efforts to keep would-be recruits from leaving and detaining them upon their return. In April, the country’s interior minister, Bernard Cazeneuve, unveiled 20 measures ranging from stripping people of French nationality to preventing minors from leaving France without parental consent.

Jihadis are baiting the West with the threat of what the foreign veterans might do when they return, tweeting warnings such as “See you in New York.” One British jihadi fighting in Iraq with the nom de guerre Abu Rashash Britani tweeted that returning fighters should capture and behead British Prime Minister David Cameron.

For Western governments the trick will be to find a balance between pursuing preventive measures and making sure not to alienate Muslim communities, from whom they need assistance to counter the threat.

[3] Testimony from heads of British intelligence agencies to the House of Commons Intelligence and Security Committee, 7 November 2013, https://b1cba9b3-a-5e6631fd-s-sites.googlegroups.com/a/independent.gov.uk/isc/files/20131107_ISC_uncorrected_transcript.pdf?attachauth=ANoY7cpXqpJZymVM9dRBG3tKImss0s-JM6JqvEId0cJlE9VdLBBPTd_h_9yYItbiI0wWQqB011gJ-B4PUUKSUy9y31VMwPpyS3kWFJ9QEuVw8LMQ-iCOy1bsucTXlz9CDDCry0WNk1m1zPaOHPVuDyFpfvX_0biy4s-ZUWjE3maMuV9TDjDtwFVYeU0hHMxwXGfWGBp4J0D0_Ulrn6JTw4G765Mx-FcBs9OEdV9phslixHx_JFN6MxWEVkA5LVDEmkif9w4f1Pkd&attredirects=1.

[5] Thomas Hegghammer, “Should I Stay or Should I Go?”, American Political Science Review, February 2013, http://cisac.stanford.edu/publications/explaining_variation_in_western_jihadists_choice_between_domestic_and_foreign_fighting.

[7] Aaron Zellin, “ICSR Insight: Up to 11,000 Foreign Fighters in Syria; Steep Rise among Western Europeans,” The International Centre for the Study of Radicalisation, 17 December 2014, http://icsr.info/2013/12/icsr-insight-11000-foreign-fighters-syria-steep-rise-among-western-europeans.