The GCC Riyadh summit: Beginning of the end of the Qatar crisis? 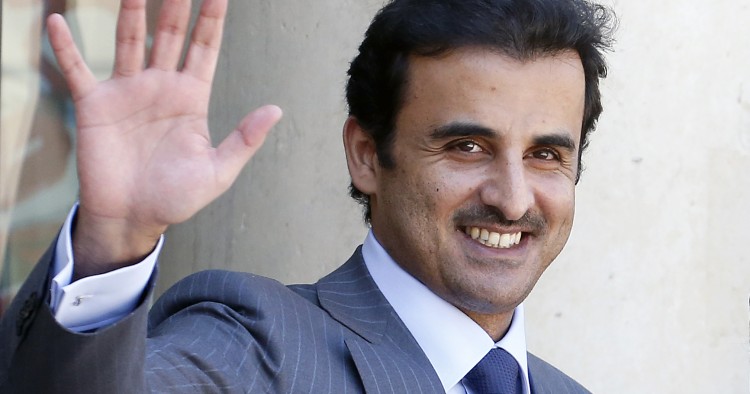 Speaking before Qatar’s Shura Council on Nov. 6, Sheikh Tamim bin Hamad Al Thani expressed his regret that the ongoing dispute between Qatar and fellow members of the Gulf Cooperation Council (GCC) has yet to be resolved. The emir assured the Shura Council, however, that “crises will pass” even if “history teaches us that … if (crises) are handled badly, then this may leave traces which last for a long time.” The upcoming GCC summit in Riyadh, set for Dec. 9, will put this to the test and offers an opportunity to bring the opposing sides to the table, but for now it is far from clear what will come out of the meeting.

The 18-month-old GCC diplomatic crisis is the latest and most severe in a series of conflicts between Qatar and the states of the so-called Anti-Terror Quartet (ATQ): Bahrain, Egypt, Saudi Arabia, and the United Arab Emirates (UAE). To varying degrees, the ATQ members have seen Qatar’s links with Islamist groups (namely the Muslim Brotherhood), relations with Iran and Turkey, liberal media culture, and hosting of Arab dissidents and exiles as a threat to their own interests. These regimes perceive Qatar as a small country that has punched far above its weight, acted irresponsibly, and shown a disregard for the GCC’s collective interests, not only vis-à-vis the forces of political Islam but also Iran’s regional ascendancy.

While there have long been tensions between Qatar and its Arab Gulf neighbors, the current row has been unprecedented in terms of the damage it has done to Doha’s ties with the ATQ states, which have escalated the situation by implementing a blockade, waging an information war in the media and via lobbyists, and even considering military action. By refusing to reconcile with Doha until the Qatari leadership accepts a list of 13 demands that the then-U.S. Secretary of State Rex Tillerson said would be “very difficult” for Qatar to meet, the ATQ states have likely lost the potential to regain the Qataris’ trust for the foreseeable future.

At this juncture, with the GCC essentially dormant, the Qatari leadership is looking ahead to and preparing for a post-GCC future. The implications of a permanent Qatar-ATQ rift for the regional order would be negative, however, both for Qatar and the other Arab Gulf states. It would result in missed opportunities for the monarchies of the Arabian Peninsula to deepen their coordination and further enhance their security and ability to successfully diversify their economies in preparation for the post-oil era.

Perspectives on the crisis differ across the GCC. For Kuwait’s rulers, who throughout modern history have stood for Arab Gulf solidarity and diplomatic solutions to regional conflicts, it is deeply unsettling. Since the current dispute broke out in 2017, Kuwaiti officials have been leading GCC efforts to resolve the crisis. Although all diplomatic efforts have failed thus far, the Kuwaiti leadership remains hopeful, and its deputy foreign minister, Khaled al-Jarallah, even went so far as to say that the December GCC summit in Riyadh could help bring the end of the crisis into sight.

But Saudi and Emirati leaders have made it clear that they do not prioritize resolving the dispute. In Saudi Arabia and the UAE, the official narrative is that the Qatar crisis is not a major issue. Officials in Riyadh and Abu Dhabi believe that their countries could live comfortably with an institutionalized blockade of Qatar and that even if the siege of Doha has failed to achieve its political objectives, their actions have been justifiable and their response proportionate.

If the Saudi and Emirati leaders change their minds, they will find that it was much easier to spark the conflict than it will be to end it, and it will take considerable effort to restore trust among the GCC’s six members and regain the bloc’s role and relevance in Middle Eastern and global affairs. Furthermore, the longer the dispute goes on, the greater the political cost will be for Riyadh and Abu Dhabi if they end the blockade without extracting substantial concessions from Doha.

Despite this bleak outlook, analysts have interpreted a recent speech from Saudi Arabian Crown Prince Mohammed bin Salman (MBS) as a sign that the Gulf dispute might be cooling down. Speaking at the Future Investment Initiative in Saudi Arabia in late October, MBS issued a surprisingly positive statement about the performance of the Qatari economy.  Riyadh’s relations with Washington and European capitals have come under unprecedented pressure lately, following the murder of Saudi journalist Jamal Khashoggi in early October. For Western investors, the political risks and moral costs of being perceived to be close to the Saudi leadership will increase as a result of the Khashoggi case, and this may make it more difficult for Saudi Arabia to obtain Western investment in the near future. As officials in Riyadh are committed to the success of the Vision 2030 economic development plan, this may prompt the Saudi leadership to consider repairing its damaged ties with Doha to attract Qatari money to the kingdom.

The U.S. and Turkey have also put pressure on Saudi Arabia to end the siege of Doha. President Donald Trump is seeking to strengthen Sunni Arab unity in the face of Iranian ascendancy across the Middle East. Both Qatar and the Arab Gulf states blockading Doha are on the frontline in the struggle against Iranian expansionism. From the White House’s perspective, the GCC dispute has severely undermined Washington’s plans for countering Tehran. As Saudi Arabia seeks to defuse problems in its relations with Washington in the aftermath of the Khashoggi saga, lifting — or at least easing — the blockade on Qatar could be an option.

As for Turkey, Saudi Arabia does not want the Turkish authorities to leak more evidence about the Khashoggi case, and reconciliation with Qatar could be part of a grand bargain with Ankara. Fearful of Turkey’s determination to weaken MBS, who is at odds with Turkish President Recep Tayyip Erdogan on a number of major issues and a rival for regional leadership, the Saudis may look to make concessions to Ankara on other matters to limit Turkey’s plans to further capitalize on the killing. Given that Erdogan first sought to bring Qatar and the ATQ toward a diplomatic settlement shortly after the Gulf crisis broke out last year, securing an end, or at least a significant easing, of the siege of Qatar would be a major political achievement for the Turkish president.

Whether these factors are enough to incentivize Riyadh to repair its ties with Doha and encourage other ATQ states to follow suit remains to be seen. Unfortunately, nationalism, pride, and emotion — and the personal nature of the dispute — have made the GCC crisis bitter and reconciliation difficult.

In the face of widespread international pressure and condemnation, the newly ascendant Saudi crown prince is facing an unprecedented crisis. Fearful of how some in the kingdom, and in countries allied with Saudi Arabia, could perceive weakness if he rolls back Riyadh’s demands of Qatar, the crown prince might believe that now is not the time to make any real concessions to Doha. Even partly lifting the blockade — or making a diplomatic overture — would be extremely challenging for the leadership in Riyadh to do while saving face.

At the same time, the Qataris have seen their refusal to meet any of the ATQ’s 13 demands as a matter of national pride, in the belief that the quartet’s ultimate objective is to strip Qatar of its sovereignty.

The upcoming GCC summit in Riyadh this month offers an opportunity to make headway on easing or resolving the crisis. While a Qatari representative plans to attend, this alone does not guarantee progress will be made. After all, representatives of all six member states met in Kuwait in 2017 for the GCC’s last annual summit, and the outcome was not encouraging: the meeting fell apart within hours and only two GCC heads of state — from Kuwait and Qatar — attended. It is not clear how different the 2018 summit will be. The king of Saudi Arabia’s invitation to the emir of Qatar, announced by Qatar News Agency on Dec. 4, raises the remote possibility that Qatar’s head of state will attend. If he does, it would be a major turning point in the Gulf crisis as he has not set foot on Saudi soil since the blockade began in June 2017. Yet it would also be interpreted as a reconciliatory gesture toward a neighbor that previously sought to oust its emir, and as a result it is highly doubtful that Sheikh Tamim will attend the summit.

Qatar’s exit from OPEC, effective Jan. 1, 2019, which was announced one day before the emir received the king’s invitation, adds a new layer of tension to Saudi-Qatari relations. For the Saudi leadership, the decision is seen as a swipe against Riyadh. Although the economic impact of its withdrawal will be small — Qatar accounts for just 2 percent of OPEC’s oil output — it will have a negative symbolic impact on Saudi Arabia. Coming just before the OPEC+ meeting in Vienna, Qatar’s announcement may damage the perception of the cartel as a unified bloc, and it also raises the question of whether other smaller and less influential members will consider following its lead.

In any event, the emirate’s decision to exit a Saudi-led multinational institution that it has belonged to since 1961 is illustrative of a new dynamic in the region whereby Doha is refusing to play by Riyadh’s rules and participate in Saudi-led organizations. Qatar is developing its foreign policy and establishing alliances that are outside of Saudi Arabia’s orbit of influence, which institutions such as OPEC help sustain. Although it is unclear how Qatar’s exit from the group of oil producers will impact the cartel itself, the decision only further highlights how little common ground Riyadh and Doha share in the run-up to this month’s summit.

As for the summit itself, four key questions will determine whether it can help pave the way for Qatar and the ATQ to restart diplomatic relations and reopen pre-blockade trade. First, what level representatives from the six GCC states will attend? Second, will the blockade of Qatar be discussed? Third, how long will the meeting last? Fourth, how will Qatari officials and their counterparts from Bahrain, Saudi Arabia, and the UAE interact?

Until the GCC meets this month and answers to these questions are known, it is difficult to tell if optimism about the crisis winding down is justified. Although the summit in Riyadh will bring the GCC states to the table and give them an opportunity to overcome their diplomatic row, it is premature to expect that the meeting alone will guarantee a speedy resolution to this highly charged dispute.