The Grand Sheikh and the President 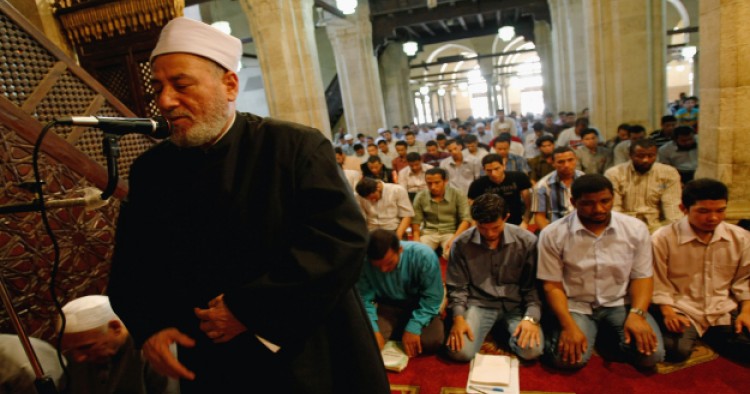 From Muhammad Ali to Mohamed Morsi, modern Egyptian leaders have understood that any attempt to control the state without the endorsement, if not blatant co-option, of key institutions such as al-Azhar is an ill-fated pursuit. The headache for President Morsi is that these institutions are trying to assert their independence and are presenting a range of direct and indirect challenges to his authority and, more broadly, to the Muslim Brotherhood and its political arm, the Freedom and Justice Party (FJP).  One cannot truly grasp the crisis of legitimacy and strategy facing President Morsi without an understanding of the frictional relationships between the state, al-Azhar, and the Muslim Brotherhood before and since the 25 January 2011 uprising.

Al-Azhar is recognized as a fundamental and respected source of religious guidance for the Muslim umma (community).[1] Because of its influence and respected status, al-Azhar has been subjected to numerous attempts of co-option and control since the time of Muhammad Ali. He reorganized land ownership and nationalized thousands of acres of waqf (religious endowment) land, thereby limiting the financial resources on which al-Azhar depended. Since Ali, Egypt’s governments have worked hard to control al-Azhar through successive reorganization laws in 1896, 1911, and 1930. The combined effect of these laws was the centralization of al-Azhar’s administration, which effectively facilitated future manipulation of the grand sheikh’s role and the institution by the Egyptian state.

The greatest infiltration of al-Azhar, however, occurred under Gamal Abdel Nasser, who “understood the importance of gaining control over al-Azhar in order to ensure domestic control and promote his foreign-policy objectives.”[2] Under the infamous Law 103 of 1961, Nasser placed the entire institution under the formal jurisdiction of the Ministry of Endowments and, consequently, ensured that all financial resources would be directed through non-Azhar state officials. The law also made the appointment of the grand sheikh the prerogative of the Egyptian president.

Nasser’s domination of al-Azhar set the path for its future manipulation by both Anwar al-Sadat and Hosni Mubarak. While Nasser, Sadat, and Mubarak all relied on the use of al-Azhar and religious symbolism as part of their legitimization tactics to achieve political gains, each manipulated Islamic references in a slightly different way. Nonetheless, their strategy of controlling al-Azhar rested on three main considerations: they recognized that an institution as established and respected as al-Azhar could provide legitimacy and support for their policies; they realized that they needed a strong counterbalance to the growing religious influence of both internal forces such as the Muslim Brotherhood and Salafis and external forces like Saudi Arabia’s Wahhabism; and they understood that garnering al-Azhar’s power could ensure regional stability among Arab and Muslim nations due to the institution’s influence and legitimacy.

By controlling al-Azhar, the government tainted the neutrality and integrity of the institution.  In “supporting” the corrupt and ineffective state, al-Azhar has at times been considered an accessory to the state’s violations and, accordingly, a failure in upholding the true tenets of Islam.  Illustratively, Sheikh Abd al-Hamid Kishk, a popular Islamist preacher, criticized al-Azhar’s giving-in to the government, arguing that “ever since the reform [of 1961], the leadership of al-Azhar has ceased to render any service to Islam.”[3]

Al-Azhar and the Brotherhood: It’s Complicated

Muslim Brotherhood founder Hassan al-Banna was skeptical at the frail role of al-Azhar in opposing the British occupation of Egypt, the corrupt monarchy, and encroaching Western values.   Unlike Muhammad Abduh’s call for Islamic revivalism and critical thinking, al-Banna advocated for a stricter version of Islam, as he believed that all Egypt’s “illnesses” (such as poverty, corruption, and occupation) were a result of adopting Western values and failing to adhere to Islam.  From here came the famous, ambiguous slogan, “Islam is the Solution.”  By the time of Nasser, Brotherhood skepticism toward al-Azhar had turned into antagonism.

The Brotherhood faced heavy setbacks under Nasser. After the “failed assassination attempt” on the president in 1954,[4] the group was banned and thousands of its members were tortured or killed or fled the country. During this period, al-Azhar stood with Nasser against the Brotherhood, and its senior scholars issued several statements that portrayed the Brotherhood’s ideology as a threat to social cohesion and as anti-Islamic and apostate.[5] Many Brotherhood members have never forgotten or forgiven al-Azhar for this betrayal or the way that al-Azhar became a tool of subsequent regimes against the Brotherhood and extremist groups.

A more recent case that shows how this bitterness is still at play is the 2006 Brotherhood-affiliated students’ “military parade” at al-Azhar University. Grand Sheikh Ahmed el-Tayeb, university president at the time, criticized the Brotherhood, accused it of infiltrating al-Azhar via the parade, and vowed that the university would never be an open field for Islamists to spread their religious and political ideologies.[6] Over 100 students were arrested, and Mubarak’s regime used the arrests as a pretext to detain senior Brotherhood leaders, later sentencing them in a military trial.

Al-Azhar and the Brotherhood beyond 25 January 2011

In the last two years, al-Azhar has managed to re-emerge as an important player in the political and social vacuum created by the 2011 uprising. It took progressive steps by bringing together Coptic leaders, Islamists, opposition figures, women, and youth and sponsoring several consensus initiatives[7] in a way that the Supreme Council of the Armed Forces (SCAF) failed to do and Morsi has yet to accomplish. Understanding the importance of al-Azhar against the rising Islamists, the SCAF hastily issued a decree to amend Law 103 of 1961, establishing a quasi-independent position for al-Azhar.[8] Its main component was reinstalling the senior scholars council that would elect al-Azhar’s grand sheikh and nominate Egypt’s mufti—a pre-Nasser selection process. The law stirred controversy,[9] especially since the Salafis and the Muslim Brotherhood regarded Grand Sheikh Ahmed el-Tayeb and Mufti Ali Gomaa as remnants of the Mubarak regime.[10] However, the Islamist-dominated parliament of 2011 decided not to challenge the law, and President Morsi later confirmed the composition of the council.[11]

Despite this display of accord, since Morsi’s election several incidents have characterized the friction between al-Azhar and the Brotherhood. The initial incident occurred when el-Tayeb walked out of Morsi’s inauguration at Cairo University after discovering that he would be seated at the back.[12] Despite the official explanation that blamed his seat assignment on “lack of organization,” it can be inferred as a snub against him, especially since Saad el-Katatni, a Brotherhood and FJP leader who held no official role in the government at the time, was seated in the front row among dignitaries.

In November 2012, Morsi issued a constitutional decree that sparked violent protests across the country. Al-Azhar challenged Morsi in a statement, saying that “the president of the republic must freeze the recent constitutional declaration and engage immediately in a dialogue that includes all political forces, without exception and without preconditions.”[13] Such a political statement, viewed within the context of al-Azhar’s successful track record of sponsoring inclusive dialogues, represented another blow to Morsi through criticism of his divisive policies.

Another sticking point has been the new constitutional role of al-Azhar, chiefly Article 4, which enshrines the spirit of the SCAF-approved al-Azhar law.[14] The article stipulates that the senior scholars’ council is to be consulted on issues pertaining to the application of Shariah, but the language does not indicate when or which branches of government must carry out such consultations. Al-Azhar asserted its constitutional right by insisting that it review the contentious bill regarding Islamic bonds (sukuk). Al-Azhar’s Islamic Research Complex said that “the draft [law] should have been referred to the Senior Scholars Authority for discussion and so it could give its legal opinion, in line with its duty.”[15] This move, supported by the Salafi al-Nour party, surprised the FJP and Morsi, who then acknowledged that al-Azhar did indeed have the right to review the law. Al-Azhar submitted nine amendments to the law, which were accepted unanimously by the Shura Council before Morsi signed it into law in May 2013.[16]  The case of the sukuk law set an important precedent for al-Azhar to review draft legislation in the future.

Recent public interest stories have also illustrated the rift between al-Azhar and the Brotherhood. Al-Azhar students affiliated with the Muslim Brotherhood have capitalized on the April 2013 food poisoning scandal on campus to call for the dismissal of the grand sheikh and the university president, who was indeed sacked. This case and the associated student protests have fueled conspiracy theories and brought concern of a “Brotherhoodization” of al-Azhar—controlling such prized positions as the grand sheikh and mufti—back to the forefront.[17] When a second round of food poisoning occurred just weeks later, the grand sheikh was in the United Arab Emirates receiving the Sheikh Zayed Book Award for Cultural Personality of the Year. El-Tayeb was recognized for his “leadership in moderation and tolerance…and lauded for encouraging a culture of tolerance, dialogue and protection of civil society.”[18] This particular praise for el-Tayeb, describing qualities that Morsi lacks and coming from Abu Dhabi at a time when the Emirati government led a crackdown against 94 members of al-Islah, an Islamist group suspected of having links to the Brotherhood, is a striking affront to Morsi and the Brotherhood back in Cairo.[19]

Beyond its tense relations with the Muslim Brotherhood, al-Azhar faces internal challenges,[20] from an influx of extreme religious opinions (fatwas) presented by independent untrained preachers as well as its own faculty to a lack of institutional and educational reform and alleged instances of corruption. In recent discussions with senior aides to the grand sheikh, this author learned that al-Azhar is working with a consultancy firm to restructure its bureaucracy to improve the management of the institution and launch a satellite channel to present “moderate” Islamic views to counter extremist, Salafi interpretations promoted on channels like al-Nas and al-Rahma.[21] And in a huge step for al-Azhar’s bid for further independence, the prime minister recently delegated powers to the grand sheikh to issue and amend stipulations from the 1961 law regarding the internal administration of al-Azhar.[22] Though vaguely written, this decree represents a rare gesture from the government to return authority to the grand sheikh to govern al-Azhar’s internal affairs, authority that has been traditionally sidelined by the modern Egyptian state. It remains unclear what kind of discussions took place behind the scenes before this decree was issued, why Morsi and the Brotherhood would tacitly allow this to occur, and what changes the grand sheikh will pursue and be sanctioned to pursue in the near future.

With the Muslim Brotherhood in power and Islamist discourse crowding the public sphere, al-Azhar cannot help but to be an important player in Egyptian politics. A stark difference between the organizations, however, is their ambitions. While the Muslim Brotherhood seeks socioeconomic and political gains, as well as success at the ballot box, al-Azhar is concerned with ensuring its institutional independence and promoting its moderate interpretation of Islam. In the coming months, it will be important to follow the al-Azhar-Brotherhood dynamics, paying particular attention to public remarks by figureheads and possible reviews of legislation by al-Azhar. A large part of the contestation between the organizations lies in personality politics between el-Tayeb and al-Azhar’s senior scholars on the one hand, and Morsi and Brotherhood figures on the other. And because al-Azhar has already won the legitimacy game that the Brotherhood desperately seeks to champion itself, the historical contestation between both organizations will continue.

[1] As Nathan Brown observes, al-Azhar has historically had three key interests: to maintain institutional autonomy; to preserve its respected status through its role as key interpreter of Islam; and to encourage the propagation of Islam. Nathan Brown, “Post Revolutionary al-Azhar,” Carnegie Endowment for International Peace, September 2011, http://carnegieendowment.org/files/al_azhar.pdf.