Gulf oil producers feel vindicated, but don’t expect them to turn on Russia 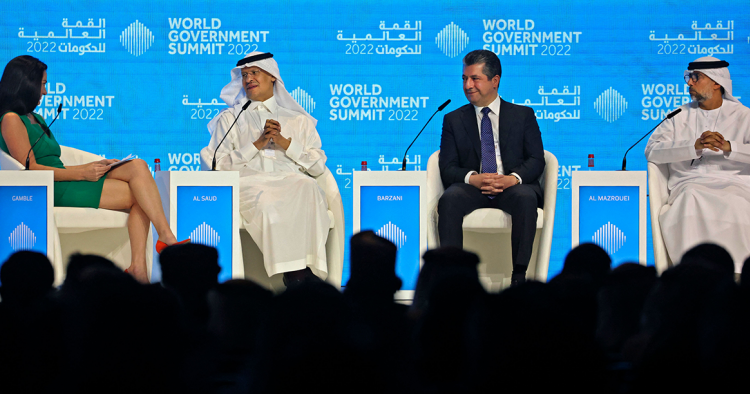 The war in Ukraine, which has unleashed fears of an energy supply crunch and pushed oil prices to record highs, has brought back to the forefront the conversation about the need for new investments in oil and gas for the foreseeable future. That’s in stark contrast to calls almost a year ago by the International Energy Agency (IEA) to forgo investment in fossil fuels in the race to a net-zero emissions world. As the calls multiply for Gulf producers to step in and fill the gap in gas and oil supplies as Russia faces sanctions, producers now feel vindicated after being shunned, and even targeted, at the U.N. Climate Change Conference (COP26) in Glasgow last year. This newly regained confidence is also pushing the limits in the political conversation between the Gulf and the West, with OPEC powerhouses Saudi Arabia and the UAE rejecting calls from the U.S. and other allies to squeeze Russia out of their OPEC+ alliance as part of the U.S. and NATO-led pressure campaign against Moscow to end its war on Kyiv.

In early March, less than two weeks into Russia’s invasion of Ukraine, oil prices hit a record high of $139 per barrel, the highest in about 14 years, while gas prices in Europe more than doubled. The market volatility and coordinated rounds of sanctions targeting Russia’s economy sent shockwaves across Europe and the U.S. Oil prices have fallen slightly since, but both Brent and West Texas Intermediate benchmarks are still averaging above $100 per barrel, way above the averages seen before the COVID-19 crisis hit the world in 2019.

With an average of 10 million barrels per day (bpd) of oil production, Russia’s impact on the global energy balance is far from negligeable. It is also the second-largest producer of natural gas globally, accounting for 16.6% of total world supply. It exports 37% of its domestic natural gas production, with the majority of this going to Europe, meeting about 45% of the region’s import demand. The U.S., even though it is a major oil and gas producer, also imported Russian crude and gas to meet its consumption needs.

Supply tightness, skyrocketing oil prices, and the growing prospect of new Western sanctions and an oil embargo against Russia prompted consuming nations to call on Gulf producers to increase their output to meet potential shortages in the market, irrespective of the previous attacks on fossil fuel producers in the context of the net-zero pledges. The irony did not escape the biggest oil producers in the region, however.

Addressing the audience at the World Government Summit in Dubai on March 29, Saudi Energy Minister Abdulaziz bin Salman recalled his speech at COP26 in Glasgow last year where he stressed — to the indifference of other leaders at the gathering — that addressing climate change would be meaningless without ensuring energy security and economic sustainability and growth. “Today, no one is talking climate change. The focus is back on oil and gas and energy security,” he said.

For Gulf producers, the fervent calls for more oil and gas to make up for Russian supplies drew home the point that the earlier demands to ditch fossil fuels were premature and that, in the words of Abu Dhabi National Oil Company (ADNOC) CEO Sultan al-Jaber, “We cannot and must not unplug the current energy system before we have built a new one.” Energy transitions take time, OPEC’s third-largest oil producer reminded those who just a few months ago raised the banner for defunding the oil and gas industry. The unrealistic approach of ignoring market economics when calling for the substitution of fossil fuels with renewable resources leads to market shocks like the one being witnessed now, where inflation and a supply crunch are eroding economic growth, al-Jaber argued.

Gulf producers are already gearing up to alter the conversation on climate change at the upcoming COP27 in Egypt this year and COP28 in Abu Dhabi next year, as the world’s immediate need for them to compensate for energy shortages using any spare capacity they hold has added sway to their argument that it is irresponsible to close the tap on oil and gas to decarbonize the world economy. Their counterargument is that hydrocarbons producers need to continue investing in and producing from their oil and gas fields while seeking to minimize carbon per barrel.

The inflation hitting the commodities supply across the world has also put an emphasis on the notion of energy affordability as paramount in the transition to net zero. A supply crunch resulting from defunding the oil and gas industries and divestment by international oil companies — under pressure from shareholders and climate change lobbyists — away from their fossil fuel assets, will inevitably derail economic growth as energy prices become exorbitant.

While feeling vindicated on the climate change and net-zero emissions fronts, it’s on the political scene where Gulf producers have found their voices again. The call on OPEC producers to join the boycott against Russia and push it out of the alliance created six years ago was swiftly rejected. “No one can replace Russia’s 10 million barrels per day if we squeeze it out of the alliance,” UAE Minister of Energy Suhail al-Mazrouei told the Atlantic Council’s Global Energy Forum in Dubai on March 28. The alliance is there to stay.

OPEC’s stance regarding a Russia boycott is consistent with its policy since its inception. Historically, OPEC did not take sides when Iran and Iraq were involved in an eight-year war in the 1980s and both continued to attend the ministerial meetings as full members. It did not push Iraq out of the organization when it invaded Kuwait in 1990 and U.N. sanctions were imposed on Baghdad that remained in place until the U.S. invasion in 2003. The same was true for Venezuela and Iran, despite U.S. sanctions that targeted their oil exports in recent years.

Gulf producers have a number of reasons to defend the OPEC+ alliance and maintain its ability to influence oil markets through managing supply. For one, oil demand destruction, a result of the COVID-19 pandemic, has not fully recovered yet, making it crucial for the producers’ alliance to continue micro-managing supply and fine-tuning it to avoid another glut like the one that sent oil prices into negative territory in 2020.

A second reason is the loss of output in some OPEC producers. Natural decline in oil fields, which averages around 5% per year in the biggest producers in the Middle East but could reach 10-20% in others, has hit the production capacity of several members, forcing those with spare capacity, such as Saudi Arabia and the UAE, to have to account for any shortages that might appear on the market. OPEC officials lament that the attacks on fossil fuels in the context of the conversation about climate change and the lack of investments to maintain oil production to counter natural decline have impacted the ability of some producers to keep up with their allocated output quotas.

Then there’s the possibility of Iran’s full return to the market following a potential revival of the 2015 nuclear agreement, which would result in the lifting of sanctions that kept most of its oil exports out of the market. OPEC+ has to account for the possibility of the return of Iranian barrels despite being in the dark over when Iran will be able to export its oil freely again and how many barrels it can bring to market.

More importantly, the OPEC+ alliance is needed to avoid a repeat of the oil price war between its biggest producers, Russia and Saudi Arabia, in their 2020 duel for market share that sent oil prices downhill just as the pandemic was hitting oil demand globally.

“We need to decouple politics from energy availability or else the result is poverty and economic stagnation,” said Mazrouei. Asking Russia to leave the alliance will lead to higher oil prices, which many countries won’t be able to afford, he argued.

Resisting U.S. calls to punish Russia for its invasion of Ukraine is a reflection of a recent change in the relationship between the U.S. and its traditional allies in the region that goes beyond the need for energy and their ability to continue providing a secure supply. While the U.S. edges closer to an agreement with Iran — of which they are not part — Saudi Arabia and the UAE did not miss the opportunity to note that even as their oil facilities came under attack from Iranian proxies in recent weeks, they have made no attempt at trying to punish Iran by forcing it out of OPEC.

“Don’t tell us do this or do that. We are experts in our field,” Mazrouei said, addressing the U.S. “What we are doing aims to balance the oil market for the benefit of all, including U.S. consumers.”