How sustainable is Russian-Saudi energy cooperation? 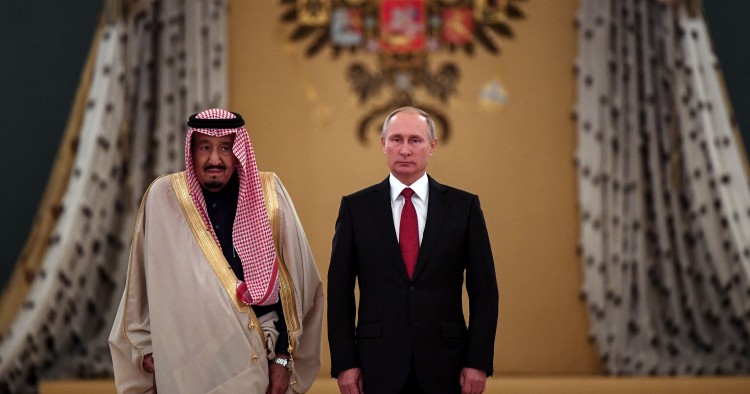 Saudi Crown Prince Mohammed bin Salman told journalists in New York last week that the kingdom is looking at extending its oil production-cut deal with Russia for 10 to 20 years.

President Vladimir Putin’s press secretary, Dimitri Peskov, did not address the deal specifically when asked about ties between Russia and Saudi Arabia following the crown prince’s statement, but did say that the two countries would continue to work together on energy matters. Saudi Arabia and Russia have teamed up since late 2016 to curb global production and raise the price of oil, the bastion of their respective economies.

The crown prince’s mention of Saudi-Russian oil ties during his two-week visit to the U.S., a Saudi ally, exemplifies a new foreign policy of hedging bets with global and regional players rather than remaining firmly in one camp.

So far, growing Saudi-Russian relations have been underpinned by their need to keep global oil prices up. But these recent statements suggest that their relations could expand. This should be alarming for the United States.

Russia and Saudi Arabia signed $3 billion worth of energy contracts after King Salman visited Russia last year, according to Russian Minister of Energy Aleksandr Novak. It was the Saudi king’s first official visit to Russia. The agreements included a memorandum of understanding regarding the construction of a $1.1 billion petrochemical plant in Saudi Arabia by Russian firm Sibur, the establishment of a joint $1 billion investment fund for energy and technology development, as well as an agreement between state-owned Saudi Arabian Oil Co. and Russia’s Gazprom on sharing drilling technology.

Russia is also seeking a long-term agreement to supply liquefied natural gas to Saudi Arabia. Khalid al-Falih, Saudi Arabia’s energy minister, was one of the VIPs attending a ceremony on Dec. 8, 2017, marking the first shipboard loading of liquefied gas from Russia’s Yamal LNG project in the Arctic.

Putin’s message to the Saudis was straightforward: “Buy our gas and you’ll save oil.”

On this issue, the countries’ interests are complementary. The kingdom wants to decrease its domestic power sector’s dependence on crude oil, while Russia is searching for markets for its LNG.

Crown Prince Mohammed’s mention of a long-term production-cut deal between Russia and Saudi Arabia came as the U.S. continues to consider scrapping the 2015 nuclear deal with Iran. The Trump administration’s recent appointment of Iran hard-liners Mike Pompeo and John Bolton to top diplomatic and national security positions is the latest signal that the agreement could be abandoned.

Meanwhile, escalating tension between Saudi Arabia and Iran, which are vying for a leadership role in the Middle East, could drive already-high oil prices even higher. This could dissuade Russia from committing to long-term production cuts when the matter comes up again in June.

Indeed, there is a growing sentiment among some oil and gas companies that Russia should abandon the deal: since its inception, it has led Russian oil production to drop by 0.8 percent. The president of Lukoil, the largest private oil company in Russia, called on the government to withdraw from the deal if prices remain at $70 per barrel for six months.

Scrapping the Iran nuclear deal in May before OPEC meets in June to extend the current OPEC+ deal—which includes OPEC and non-OPEC oil producers—could dissuade Iran from extending the Saudi- and Russian-led production-cut deal as well. Iran has already achieved pre-sanctions rates of oil production and is strongly interested in increasing its oil exports.

Reportedly, Russia played a pivotal role in persuading Iran to join the deal. Thus, it is in Saudi Arabia’s interest to cement a long-term agreement with Russia as soon as possible in order to guarantee Moscow’s support for the production-cut deal in June.

Current cooperation between Riyadh and Moscow is nascent and fragile. Although few specifics of the long-term production-cut proposal have surfaced, the intent is clear: to keep oil prices up for the foreseeable future.

Saudi Arabia is trying to diversify its economy from oil. But the success of the crown prince’s Vision 2030 program will depend on revenue from crude exports remaining steady.

A key question is whether Riyadh and Moscow can maintain their energy cooperation while putting aside their differences on the Syrian conflict and Russia’s burgeoning relations with Iran.

Although Gulf countries—especially Saudi Arabia and Qatar—will remain among the world’s biggest energy exporters for decades, the U.S. has become far less dependent on oil imports and even less dependent on Middle Eastern oil. But the global nature of energy markets exposes the U.S. economy to oil and gas price fluctuations.

Washington must prevent Russia from outmaneuvering it if it wants to increase its influence over global energy policy, and thus prices. The U.S. needs to keep a close eye on relations between its most important ally in the Gulf and its rival Russia.