HTS is not al-Qaeda, but it is still an authoritarian regime to be reckoned with 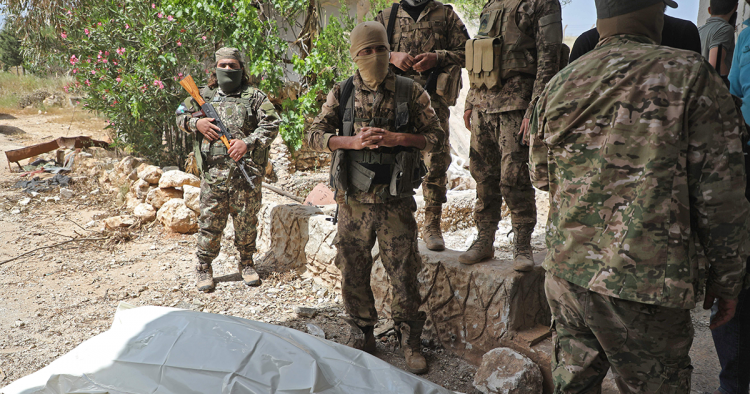 Before disclosing his real identity and announcing he was breaking ties with al-Qaeda in July 2016, “the conqueror” amir of Jabhat al-Nusra (JN), Abu Muhammad al-Jolani, always made sure to speak with confidence when asked about his relationship with al-Qaeda. He also wore a traditional, modest Shami outfit, projecting a sense of local affiliation and asceticism. Things have changed since then, however. The al-Qaeda affiliation became a burden, “the conqueror” changed his title to simply “leader,” and he began wearing a formal Western-style suit. On June 1, PBS Frontline released a documentary entitled “The Jihadist,” which includes an interview by American journalist Martin Smith with al-Jolani, now the leader of Hayat Tahrir al-Sham (HTS), who “opened his heart” about the past, present, and future of his group.1

The interview revived the question of whether the international community should believe al-Jolani’s claims about his group’s transformation from global jihadism to a local focus and his denial of the allegations of torture in its prisons. This article argues that while HTS’s transformation and split from al-Qaeda is real, al-Jolani must be pressured to share power over Idlib and loosen his group’s authoritarian grip, which is causing grievances that in the long term will push locals into the hands of radical groups like ISIS and al-Qaeda.

Known for his realpolitik and pragmatism, the 40-year-old commander changed allegiances twice during the Syrian conflict to maintain his power. In April 2013 and 2016, respectively, al-Jolani broke his bay’a, or oath of allegiance, to his former amirs, Abu Bakr al-Baghdadi of ISIS and Ayman al-Zawahiri of al-Qaeda.2 In the world of jihadis, the bay’a is a binding contract between the ruler and the ruled that stipulates mutual obligations. If the ruler does not commit a sin, obedience and recognition of his rule should be guaranteed. Otherwise, breaking the bay’a is considered highly sinful, as it weakens the umma by undermining its leadership and disuniting its ranks. Nevertheless, the survival instinct, political ambition, and hunger for power sometimes trump ideology in shaping jihadi behavior.3

Speaking with Smith, al-Jolani appeared uncomfortable discussing his radical past with a Western journalist. In his previous interviews with al-Jazeera in December 2013 and May 2015, al-Jolani did not hide his pride about his group’s affiliation with al-Qaeda.4 Back then, his group had just captured Idlib under the umbrella of Jaish al-Fateh, along with other Islamist armed factions such as Ahrar al-Sham and Noor al-Din al-Zinki.5 Over time, all of these factions were either subdued or absorbed by HTS to consolidate its rule over Idlib.

Unlike its fight with the Jaish al-Fateh factions, HTS’s battle with al-Qaeda is a zero-sum game due to al-Qaeda’s uncompromising nature and al-Jolani’s frantic search for political legitimacy, which has pushed him to adopt a more radical attitude toward the comrades of yesterday. Since June 2020, HTS has dismantled al-Qaeda’s military operations room, “So Be Steadfast,” by killing and detaining many of its senior leaders and commanders and closing their military bases.6 Indeed, more than 20 leaders and field commanders of Hurras al-Din (al-Qaeda’s affiliate in Syria), the majority of whom are wanted by the international coalition, are imprisoned in HTS’s unofficial jails.7 Moreover, it has become more difficult to deny HTS’s involvement in the killing of top Hurras al-Din leaders by the international coalition, such as Abu al-Qassam al-Urdini and Abu Muhammad al-Sudani, bearing in mind their tight security measures and al-Jolani’s repeated claims of “containing” Hurras al-Din.

Although al-Qaeda still exists in Idlib, its presence is insignificant. Even its last operation, in December 2020, was carried out outside Idlib in the south of al-Hassakeh against Russian forces.8 Claiming that HTS, with its more than 12,000 fighters, is still affiliated with al-Qaeda not only promotes a security narrative that turns Idlib, home to more than 3.5 million civilians, into a justifiable target for the international coalition, but also justifies the Syrian regime and Russian bombing of Idlib under the pretext of fighting al-Qaeda.

The rule of HTS in Idlib

While HTS’s periodic crackdowns on al-Qaeda and ISIS in Idlib could be perceived as signs of goodwill to the international community, these actions largely serve to consolidate its rule by eliminating its sworn enemies and quashing local dissident voices, making it no different from other authoritarian regimes in that regard. The group’s repressive and exclusionary approach in Idlib is likely to exacerbate radicalization as it marginalizes, excludes, and represses many who are not necessarily convinced by the ideology of ISIS and al-Qaeda, but are pushed by their grievances and shared enmity of al-Jolani to join such groups. Just recently, the American journalist Bilal Abdul Kareem, who had spent more than six months in HTS’s solitary confinement for highlighting numerous allegations of torture in its prisons, broke his silence and debunked al-Jolani’s denials of human rights violations committed by his group and the existence of prisons run by it.9

Idlib is formally managed by the “Salvation government,” which includes technocrats not necessarily affiliated with HTS, but those in the government need to be blessed by its leadership. The economy and security sectors in particular are under the close watch of HTS leadership. Through al-Jolani’s cronies, HTS monopolizes Idlib’s economy via its control of the Bab al-Hawa crossing, the banking sector, oil, and telecommunications. A recent report published by the Operation and Policy Center concluded that “instead of leading the charge of HTS’s economy, the Salvation government is rather a tool to give it ‘legal’ and administrative cover.”10

Security is another sector tightly controlled by HTS, as it enables al-Jolani to coup-proof his rule by monitoring disputes and calibrating relationships between the inner power circles. There are three main factions within HTS: those with a high sense of pragmatism led by al-Jolani himself, those who have a continued vested interest in HTS’s dominance, and a minority ideological faction that has been sidelined by al-Jolani and his supporters. As a local journalist put it, “Al-Jolani is the safety valve of HTS’s different currents, which constantly compete for power and cash.” During the time of JN, it was the jihadi Salafi ideology that brought all of these men together. Today, the region’s seeming stability is fundamentally precarious and depends on the personality of al-Jolani, whose enemies continue to grow in number.

In a recent interview, James Jeffrey, the former U.S. ambassador to Iraq and Turkey, likened Washington's relationship with the Syrian Democratic Forces to that of Ankara with HTS.11 From that perspective, dealing with designated terrorist groups such as HTS is necessary to secure the region, maintain its stability, and coordinate the delivery of aid. In the long run, however, this kind of understanding undermines sustainable counter-terrorism policies, as it risks perpetuating al-Jolani’s authoritarian rule over Idlib. Should the status quo prevail, which is likely, Idlib seems to be heading toward a Gaza-like scenario, where like the Hamas leadership, al-Jolani will be isolated but consolidated.

To avoid such an outcome, Ankara, which has gained great military and economic influence in Idlib since the March 5 agreement with Moscow, should pressure HTS to accept a power-sharing agreement. Throughout the last two years, Turkey has sought to unite the military factions operating in Idlib and the other areas in the Turkish zone of influence under one military body known as the military council. However, the attempt in October 2020 to bring together the three largest factions in these areas, HTS, Ahrar al-Sham, and Faylaq al-Sham, failed due to al-Jolani’s machinations.12 Al-Jolani orchestrated an “internal coup” within Ahrar al-Sham to ensure its representative in the military council was aligned closely with him and not with other factions’ interests. This episode showed how threatening the idea of sharing power appears for HTS and the lengths to which its leadership will go to avoid it.

A power-sharing agreement could be a viable solution for the Idlib conundrum as it would weaken HTS’s hegemony over the region and the Salvation government, address the interests and grievances of other local actors, and ensure that the one-time “conqueror” will not rule forever.

Orwa Ajjoub is an affiliated researcher at the Center for Middle Eastern Studies in Lund University. Orwa’s focus includes the ideological aspect of jihadi-Salafi groups and the internal dynamics of jihadi groups in Syria. The opinions expressed in this piece are his own.