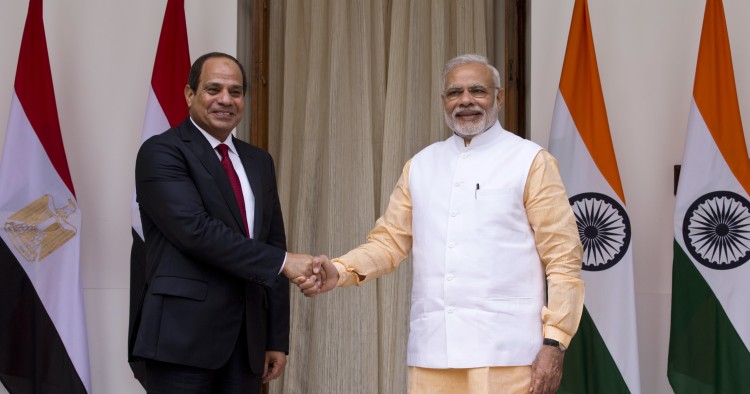 Though the Egyptian economy during the Mubarak regime registered one of the highest growth rates in decades in the years before the Arab uprising, the fault lines were deep.[1] Over time, rising inequality, endemic corruption and other problems had generated widespread discontent. The series of labor strikes that occurred well before the revolution were symptomatic of the roiling tension.[2]

However, six years after the fossilized authoritarian regime of Hosni Mubarak was swept from power by a tide of popular discontent, Egypt continues to face a multitude of economic and other challenges. The economic shock of the Arab uprising in Egypt has manifested itself in stalled growth rates, high and rising unemployment (especially among youth), shuttered factories, dwindling foreign reserves, and vanishing foreign investment, capital and tourists as well as increasing debt.[3] Furthermore, the November 2016 currency devaluation — a key demand of the International Monetary Fund (IMF) to which Egypt acceded in order to obtain a $12 billion loan, has had the pernicious effect of nearly halving individuals’ personal wealth.[4]

Against the backdrop of these difficulties, suffice to say that Egypt is eager for a fresh start, particularly in the economic sphere. This essay discusses the role that India has played, and could play in helping set Egypt’s economy on a more stable footing while broadening and deepening the bilateral relationship.

Traditionally, Egypt has been one of India’s most important trading partners in the African continent while India is its sixth largest trading partner. However, the violence and instability that has convulsed Egypt in recent years has adversely bilateral trade. According to the Indian Ministry of Commerce, whereas the total value of trade was $5.42 billion in 2011-12, it dropped to 4.76 billion in 2014-15.[5] Yet, despite this downturn, India is still Egypt’s second largest export destination and tenth largest source of imports.[6]

India’s commercial presence in Egypt is significant. About 52 Indian companies are operating in Egypt, twenty five of them are joint ventures with a combined investment of nearly $3  billion spread across various sectors.[7] Indian companies are also active in Egyptian energy sector. ONGC Videsh and Reliance have stakes in oil exploration blocks. GAIL India Limited, country’s flagship gas company has equity participation in three Egyptian companies in the CNG and City Gas sectors.[8] An Indian company has designed supplied and constructed electric power transmission tower and laid 196 Km of transmission line in Egypt.[9] It is also supplying overhead transmission towers between Egypt and Jordan.Indian companies  provide direct and indirect employment to approximately 35,000 Egyptians. The top five Indian companies alone, mainly in the labor intensive textile industry, provide direct employment to more than 12,800 Egyptians.[10] Symbolic of deeper ties is the  immense popularity of Indian movies in Egypt.

India’s Potential Role in Reconstruction and Stabilization in Egypt

Egyptians are anxiously awaiting the economic progress that is in keeping with the spirit and fulfills the promise of the Tahrir Square revolution. In response to these popular pressures and expectations, the government of President Abdel Fattah el-Sisi is placing its bet on large, ambitious construction projects. One such project has entailed the widening and deepening of the Suez Canal, at an estimated cost of $8 billion, which aims to double traffic and generate annual revenues of more than $12.5 billion.[11]

However, for India, participating in projects such as the expansion of the Suez Canal might not be the most suitable way of contributing to Egypt’s future, especially given the pressures that Cairo faces in meeting the population’s basic needs as well as in developing its human capital. But there are several ways where Indian investment and expertise could make its mark.

Egypt, once the bread basket of the Roman Empire, is now reeling under food insecurity.[12] In 2008, India and Egypt agreed to cooperate in areas of agricultural research, extension, cooperatives, agricultural finance and credit, fertilizers, modern irrigation systems, and agricultural machinery.[13] Given its own experience in improving agricultural productivity through the Green Revolution, India can assist in promoting the development of high-yield and drought and pest resistant seeds. It can also share best practices in dry land, organic, cooperative, and precision farming.

Egypt is facing one of its worst energy crises in decades. Households have to endure extended blackouts and industrial activity has been crippled especially in heavy industries like cement, fertilizers, which have been operating for a long period at below capacity. India, which India ranks in the top five countries specializing in both solar PV and carbon capture, can help in harnessing solar energy and setting up captive co-generation power plants. In the wind energy sector, the Indian company Suzlon Energy, the world’s third largest supplier of components to operators with over a six percent global market share, could be a valuable partner for Egypt.

Raising incomes and creating jobs are two additional major challenges facing Egypt. In places like Aswan where life has been dictated by the grace and beauty of Nile, declining tourism has disrupted many economic activities. In recent years, young Egyptians have taken the initiative to overcome some of these difficulties. Non-governmental organizations (NGOs) such as Yadaweya are trying to foster e-commerce to sell Egyptian handicrafts, especially those made by women artisans from the district of Giza. Over the past four years, the startup scene has been exploding as many young, talented and often tech-savvy Egyptians have been increasingly turning to entrepreneurship to build their futures. Many start-up incubation centers such as Injass and Pioneers of Egypt are helping young people translate their business ideas into practice. Indeed, Egypt’s startups are on the cusp of maturing into the next stage of the business cycle, but without money or skilled personnel the whole edifice is at risk of faltering.[14] India’s mushrooming e-commerce and the mature start-up ecosystems can facilitate Egyptians’ efforts for creation of innovative and scalable businesses to tap the online market.

The development of e-governance is an area where Indian expertise in information technology might be of value to Egypt, given the inefficiencies that plague the latter’s bureaucracy. Under the India Technical and Economic Cooperation (ITEC) program, India has launched a PAN e-African program and has set up a fiber-optic network to provide satellite connectivity, tele-medicine and tele-education to 47 countries, including Egypt, making available the facilities and expertise of some of the premier India universities and super-specialty hospitals to the people of Africa.[15] The project is also equipped to support e-governance, e-commerce, infotainment, resource mapping and meteorological and other services.

Finally, India, which is trying to encourage and partner with NGOs to make a meaningful difference in the lives of the poor in some of the African countries, could extend these efforts to Egypt. An Indian organization known as the “Barefoot College,” for example, has successfully imparted practical training to rural poor, mostly women, in the assembly, repair and maintenance of solar systems in their own habitats in countries throughout Africa (e.g., Sierra Leone, Burkina Faso, Liberia, Senegal, and Tanzania).[17] In 2008 the Indian Ministry of External Affairs recognized Barefoot College as a training institute under its flagship ITEC program. As a part of their corporate responsibility, Indian businesses can help in the provisioning of socially desirable infrastructure and equipment in the communities in which they operate. The Aditya Birla Group, for example, has adopted two schools near its plantsin  Egypt and has set up tailoring units for poor women and orphanage.[18] Given its significant commercial presence in Egypt, India should endeavor to promote social entrepreneurship in partnership with the private sector and social organizations.

As Egypt is passing through its most tumultuous transition, it needs the India’s partnership to stabilize and reconstruct its economy. This partnership should encompass the enhancement of trade and investment through innovative buy backs and currency swaps deals as well as ICT applications. India commercial presence needs to be geared to capacity building of the common people by fostering social entrepreneurship and corporate responsibility. India’s partnership in job creation opportunities, improving agricultural productivity and energy solutions would go a long way in the strengthening Egypt’s efforts to resurrect itself from its current woes.

Toward greener pastures?: The impact of environmental issues on the MENA economy and potential solutions

How have Russia’s policies in the Middle East changed since the Arab uprisings?