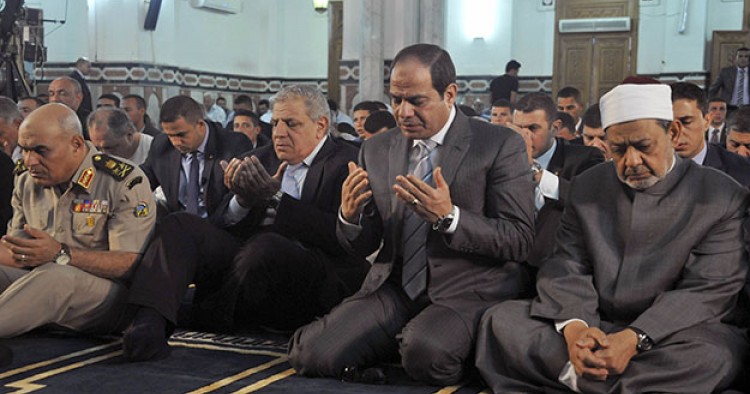 Indonesia is located far from the center of the Islamic world. Nevertheless, a large segment of the huge Muslim population of Indonesia has shown for centuries a strong affiliation to the Sunni Middle East, considering it a model of pietism and inspirational center of Islamic belief and knowledge. These bonds were, for the most part, forged by the substantial transmission of Islamic knowledge and ideas from the Middle East to the Islamic “periphery” of Indonesia. In sharp contrast, Muslim communities of the Middle East have exhibited very little interest in Indonesia’s complex society, polity and culture.

However, ways to correct this imbalance are now evident within a significant portion of the Muslim mainstream in Indonesia. The current initiative by Nahdlatul Ulama (N.U.)—a traditionalist organization[1] with an estimated membership of over 40 million—to promote globally the notion of Islam Nusantara (Islam of the Indonesian Archipelago) is a case in point. This initiative, which is backed by the Indonesian government, began to attract attention when the N.U. made it the theme of its 33rd Congress in August 2015. This initiative aims to spread, both locally and globally—and to the Middle East in particular—a multifaceted message of a tolerance and moderation in an effort to counter religious extremism and terror. A significant step forward was taken in May 2016, when N.U. held the International Summit of Moderate Islamic Leaders (ISOMIL), with the participation of many Sunni Muslim leaders worldwide. The declaration issued at the end of the summit clearly identifies the Middle East as the main focus of the initiative.[2]

The N.U. and the Notion of Islam Nusantara

Islam Nusantara is not a new concept. In a general sense, it refers to an interpretation of Islam that takes into account local Indonesian context. It is argued to be an orthodox concept of Indonesian Sunni Muslims based on three pillars: Ash‘arite theology, Ghazalian Sufism (or al-Ghazali path of Sufism), and the Shafi‘i school of jurispudence (al-Madhab al-Shafi‘i). Islam Nusantara combines Islamic teachings with local customs. As such, it can be described as the paradigmatic wasatiyyah Islam, namely Islam of the “middle path,” which seeks to strike a balance between sacred revelation and human reason.[3]

The concept of Islam Nusantara has gained currency in the Islamic discourse of the Post-Reformasi era, spearheaded by both the N.U. and the modernist Muhammadiya, the second largest Muslim organization in Indonesia, with an estimated membership of over 30 million. The first signs appeared against the backdrop of the country’s dramatic political shift in 1998. Once the authoritarian regime stepped down limits on freedom of speech and political activity, including restrictions on the politicization of Islam, were lifted. The disappearance of the authoritarian regime unleashed long-suppressed radical Islamist trends. The early years of transition to democracy included aggravated religious-sectarian conflicts and violence and growing Islamic radicalization, as well as more visible signs of the Islamization of Indonesian society. These developments caused concern within moderate Muslim civil society.

However, the reaction of moderate Muslim society to these disturbing developments was not exclusively one of fear. Counterbalancing these sentiments was growing political optimism, drawing inspiration from the peaceful democratic elections of 2004, that increasingly produced self-confidence about Indonesia’s democracy and determination to preserve the “Indonesian way,” including its moderate and tolerant brand of Islam.

But it was not until the late 2000s that the concept of Islam Nusantara gained traction largely due to the efforts of intellectuals close to the N.U. who highlighted Indonesia’s distinctive character, which features the integration of Islamic teachings with Indonesian local traditions.[4] Now, while engaged in promoting the notion of Islam Nusantara globally, the N.U. emphasizes that it does not constitute a new or distinct religion or a new school of Islamic jurisprudence (madhab), does not conflict with Islamic shari‘a, and firmly adheres  to the fundamental  teachings and values of the Sunni Islam, including tawassuth (following the middle path), tawazun (balance), tassamuh (tolerance) and i‘tidaal (moderation, temperance). The N.U. appears to have cast its own mark on the notion of Islam Nusanatara by highlighting distinctive local contours of Islam side by side with Sunni orthodoxy. Accordingly, N.U. promotes Islam Nusantara as a model for members of a religiously diverse society to coexist harmoniously and as being conducive to a synergy between Islam and nationalism. Implicitly, Islam Nusantara is presented as a model that enables Muslims to accept, and indeed thrive within a secular-oriented polity, as embodied in the state ideology of Indonesia, the Pancasila. Islam Nusantara represents an orthodox Sunni alternative that can serve as an antidote to the extremist ideology whose horrifying results are strongly manifested by ISIS in the conflict-ridden Arab Middle East.

A Challenge to the Islamic Center-Periphery Order

The N.U.’s initiative is an intriguing one. First, it challenges, through a broader historical perspective, the “order” of center-periphery relations in an Islamic context. For centuries Islamic ideas and knowledge flowed from the Middle East to Indonesia while only very rarely, if at all, did they flow in the opposite direction.

Second, in launching Islam Nusantara internationally, the N.U. has recast its role. Until recently, it had been Muhammadiyah, whose roots are directly traceable to the Middle East—mainly to the Islamic modernist legacy of the Egyptian thinker and reformist Muhammad ‘Abduh (1849–1905)—that traditionally had been regarded as outward-looking and as both the bearer and the expression of global, or universal, Islam. In contrast, the N.U. had represented a local form of Islam, rooted in rural Java. Indeed, the N.U. was established in 1926 in an effort to protect traditionalist Islam from the perceived growing threat of Middle Eastern Islamic influences, including Wahhabism and the Islamic modernist movement in particular.[5] In launching Islam Nusantara internationally, the N.U. has further broken out of its traditional, inwardly-focused and defensive mold, and has implicitly made additional significant moves to enter the space that has been occupied for years by Muhammadiyah.

During the Susilo Bambang Yudhoyono years (2004-2014), Indonesia—emphasizing its democratic credentials and track record of resolving local conflicts—signaled a growing ambition to be involved in Middle Eastern affairs, mainly by expressing an interest in participating in conflict resolution and peace-making processes. During Yudhoyono’s presidency, Indonesia also sought to promote democracy in Asia and the Arab world. These efforts accelerated in the first three years of the post-Arab spring period, while Indonesia focused on conducting a dialogue on transitioning to democracy mainly along two tracks: Indonesia-Egypt and Indonesia-Tunisia.[7]

Perhaps this change in Indonesia’s Middle East policy under Yudhoyono, who acceded to the presidency in Indonesia’s second democratic election (in 2004) reflected a growing self-confidence as well as a strong determination to bolster and sustain Indonesia’s own democratic transformation. Clearly, diverse interests joined together to initiate this change in foreign policy, among them: strengthening its position in the international arena by responding to expectations in the West to see Indonesia’s democracy as a model for the Islamic world; and combatting growing Islamophobia by showing that democracy, modernization and development are compatible with Islam. Last but not least, Indonesia, whose foreign policy is influenced to a large degree by domestic considerations, hoped in this way to contribute to efforts to tamp down the flames of conflict, violence and religious extremism in the Middle East in order to reduce the risks to the archipelago itself.

Interestingly, N.U.’s global initiative largely corresponds with the increasingly proactive, self-confident and outward-looking approach of Post-Reformasi Indonesia. It also corresponds with the foreign policy and diplomacy, imprinted with a nationalist mark, of the administration of the incumbent president, Joko Widodo; perhaps even with its particular dynamism. Indeed, it is not only the traditionalist N.U. that constitutes a significant civil society partner of the Indonesian state, shares largely the formative values of the Indonesian polity and its democratic path and corresponds with diverse interest and concerns of the current administration. Muhammadiyah also largely fits such a description, including by sharing the state’s growing concern that the shock waves of the increasing religious extremism, inter-sectarian violence and terror in the Middle East arrive to Indonesia. Heightening this concern is the fact that several hundred Indonesian Muslims have left to fight in Iraq and Syria, mainly in the ranks of ISIS, while an even larger though indeterminate number of Indonesian militants are considered to be ISIS sympathizers. The Islamic modernist organization also appears to share the view that what is at stake is not just Indonesia’s safety and security in the face of the threat of terrorist attacks but the pluralistic values of Indonesian society and the consolidation of democracy.

Perhaps it is also the increasingly assertive, proactive approach of the Indonesian state in world affairs and its growing concern about religious extremism that pushed both the N.U. and Muhammadiyah to “go global”—that is, to harness their institutions and intellectual networks and activists to the task of promoting internationally diverse ideas and projects related to democracy, pluralism, interfaith and inter-civilizational dialogue, conflict-resolution and peace-building. Thus, the N.U. and Muhammadiyah have both developed a system of “special branches” (Cabang Istimewa) throughout the Islamic world and in Muslim communities worldwide. The “special branches” facilitate social integration and networking for Indonesian students and migrant workers and support the state interest in countering radicalization within these communities. [8]

Nevertheless, the N.U., even more than Muhammadiyah, complements Indonesia’s current assertive nationalist-oriented foreign policy, which prominently features the country’s distinctive Islamic identity, including the strong bond between keindonesiaan (Indonesian-ness) and keislaman (Islam-ness). It is largely because the integration of these two ‘identities’ and the notion of “Indonesian Islam,” which highlights traditional culture, is much more acceptable within N.U.’s ranks than within Muhammadiyah’s.[9]

Many questions regarding the feasibility of N.U.’s initiative remains unanswered, and probabilities of possible outcomes unknown. In fact, it is hard to identify significant state or civil society actors in the Middle East that actually support it. Moreover, the initiative is said to be controversial even within the N.U. itself, not to mention that old rivals of the N.U. also denounce the notion of Islam Nusantara as un-Islamic innovation, bid‘ah, as its teachings differ from Islam in the Arab world. Observers also wonder about its feasibility and raise questions about the ability to face modern challenges by the notion of Islam Nusantara and to promote throughout the Islamic world a brand of Islam that is strongly anchored in the local Indonesian context.

In 2006 Professor Azyumardi Azra wrote that the Indonesian Government has traditionally disregarded Islam as an important factor in its foreign policy. He added that although Indonesia generally remains on good terms with Middle Eastern Muslim states, it has tended not to associate itself with Islam. [10] He elaborated by explaining Indonesia's agenda to not pursue a greater role in the Islamic world is a result of the nature of Indonesian Islam. He continued by saying, “Indonesian Islam has a number of distinctive characteristics vis-à-vis Middle Eastern Islam.”[11] Therefore, whatever the outcome of the N.U.’s initiative, it does seem to take the current assertive Indonesian approach one step forward. However, it is one thing to have the ambition of promoting democracy in the Arab Middle East but quite another to explicitly offer a local model of Islam of the “far periphery” to the Arab Middle East,  the cradle of Muslim civilization and the Islamic center of gravity for centuries.

[1] For the concept of “traditionalist Islam” in general, and in the Indonesian context in particular, see Robin Bush, Nahdlatul Ulama and the Struggle for Power within Islam and Politics in Indonesia (Singapore: ISEAS Publishing, Institute of Southeast Asian Studies, 2009), 29-33.

[6] The post-Reformasi era refers to the transitional period in Indonesia that began with the fall of Suharto in May 1998 following the collapse of support for his three-decade long rule as president.