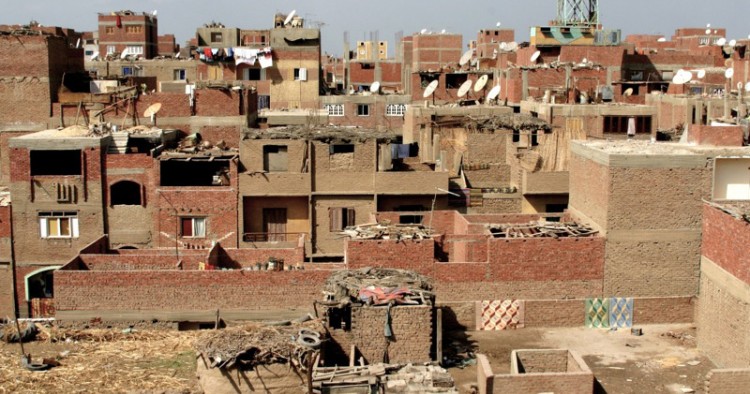 This article first appeared in The National Interest.

A 2009 map published by an Egyptian-German NGO shows a Cairo that official maps do not. Huge swathes of the city, mainly on its immediate outskirts, are denoted in a stark red color. These scarlet areas represent Cairo’s ashwa‘iyyat, or informal areas, which often feature concrete apartment buildings with red brick infill and narrow, dusty streets. Such neighborhoods house approximately 70 percent of Cairenes. Built illegally, often on agricultural land, they are unrecognized by the state and do not receive the services that formally recognized areas do, such as public schools and hospitals.

Informal areas have been providing affordable housing for residents of Cairo for decades. Occupants hail from both poor and more well-to-do backgrounds, depending on the neighborhood. The Egyptian government has both tolerated and targeted the areas, either allowing residents to make improvements to the spaces out of their own pockets or cracking down on building and other activities, such as street vending. Crackdowns were particularly common when certain neighborhoods, such as Imbaba, became known for being populated by Islamists.

Since the 2011 uprising, due to less government supervision, building in these areas has risen dramatically. Experts such as urbanist David Sims estimate a two to threefold increase in informal construction.

But recently Egypt’s military-backed interim government has begun to make noises about regaining a larger role in these areas—though through improvements rather than force. In January, shortly before the country’s new constitution was put to referendum, the government announced its intention to inject 350 million Egyptian pounds (about $50 million) into 30 informal areas in the Cairo and Giza governorates for projects like road paving. And the new constitution addresses informal areas for the first time in Egypt’s history, mandating that the state provide “infrastructure and facilities and improve quality of life and public health” in them.

Click here to read the rest of this article on The National Interest.