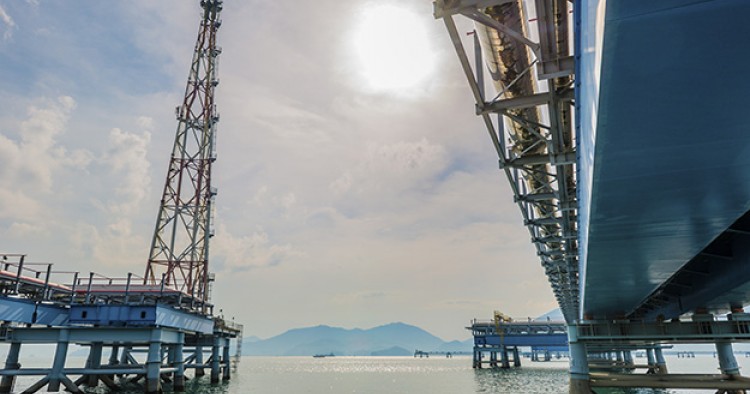 Seoul’s move comes after Iran and six major powers—the United States, the UK, France, Germany, Russia, and China—reached a landmark, interim deal in Geneva in November 2013. Tehran agreed to roll back parts of its nuclear program in exchange for a partial lifting of sanctions against Iran between January and July 2014, including unfreezing Iranian oil revenues abroad. The Geneva deal could pave the way for a comprehensive, long-term solution to the Iranian nuclear issue after the six-month period ends. The United States began easing its economic sanctions on Iran on January 20. Washington will grant six-month waivers from further U.S. sanctions to countries that have decreased oil imports from Iran. The interim deal also allows Iranian oil importers to maintain their current import levels.

For Iran’s Asian trade partners, the Geneva agreement was a welcome respite from years of multilateral sanctions and U.S. pressure to restrict their trade with Iran. The United States had called on foreign countries to implement unilateral sanctions on Iran that were more restrictive than recommended by the four United Nations Security Council resolutions in 2006, 2007, 2008, and 2010 (Resolutions 1737, 1747, 1803, and 1929). The Obama administration pressured key Asian customers of Iranian oil—China, India, Japan, and South Korea—to downgrade their respective trade and investment relations with Tehran. Although initially reluctant, the four Asian countries, as a whole, cut their Iranian oil imports by 15 percent in 2013.[1] Many of them scrambled to find alternate oil sources from Saudi Arabia, the UAE, Kuwait, and Qatar. Only Japan and South Korea, the major U.S. allies in the region, slapped unilateral sanctions on Iran, including restrictions on financial transactions with Iranian entities.

Despite some easing of Iran-U.S. relations, Seoul continues to confront a difficult balancing act between protecting its economic interests in Iran and cooperating with the United States on the Iranian nuclear issue.

South Korea has had robust trade relations with Iran, one of its largest trade partners in the Middle East and its fourth-largest supplier of crude oil. In 2013 South Korea imported 87 percent of its oil from the Middle East, with Saudi Arabia, Kuwait, the UAE, and Iran as its top suppliers in that order.[2] However, bilateral trade in recent years has been affected by international sanctions on Iran and Seoul’s political decision to limit its economic and energy trade with Iran. Between 2008 and 2009 Korean imports from Iran plummeted 30.1 percent, while Korean exports to Iran fell 8.1 percent.[3] In 2012 Korean imports from Iran decreased by 24.8 percent from the previous year.[4] Korean import of Iranian crude oil fell from 10 percent in 2011 to five percent in 2013 after it stopped importing Iranian oil for two months in 2012 under U.S.-led sanctions.[5] After receiving a temporary waiver by the United States, South Korea continued to import Iranian oil, but at lower levels than before sanctions.

Seoul tends to have trade deficits with Iran, as it imports more than it exports to the Islamic Republic. In 2012 South Korean imports from Iran reached $8.5 billion, whereas Korean exports to Iran trailed at $6.26 billion.[6]  Iran’s economic importance for South Korean output, however, cannot be overlooked, as it has become an emerging market for Korean auto parts, telecommunications, electronics, and refined oil products. Steel products and car parts constituted nearly 27 percent of Korean exports to Iran in 2012, reaching $1.67 billion.[7] In recent decades, Korean chaebols (business conglomerates)—such as Hyundai, Samsung Electronics, Daewoo Shipbuilding, GS Engineering and Construction, Hanjin Group, and Daelim Group—have had major construction and other investment projects in Iran.[8]

Small and medium enterprises, which constitute more than 90 percent of the thousands of Korean exporters doing business with Iran, have been the most affected. [9] Shin Jae-hyun, chairman and CEO of the Korea-Iran Business Council, said that the commercial losses from international sanctions on Iran include some 2,300 small exporters entirely dependent on trade with Iran.[10] On July 1, 2013, new U.S. sanctions against Iran went into effect, prohibiting small Korean iron, steel, and auto parts makers from doing business with the Islamic Republic. Seoul has had to find alternate export destinations for these affected businesses. To further complicate matters, Korean companies seeking an economic comeback in Iran are now faced with stiff competition from European and Chinese companies, coupled with lingering resentment among Iranian officials regarding Korean sanctions on their country.[11]

On many occasions, the Korean government gave mixed signals in regard to joining international sanctions against Iran. Seoul often asked for exemptions from U.S. and EU sanctions, with varying success. For example, Korean companies doing business in Iran were exempted from U.S. sanctions on Iran’s non-oil trade in March 2012. The Obama administration granted Seoul temporary waivers from these sanctions if Seoul reduced its Iranian oil imports by 10 percent.[12] By contrast, the European Union denied South Korea’s request to be waived from its sanctions on insurance of tankers carrying Iranian oil in 2012. After the EU insurance ban went into effect in July 2012, South Korea temporarily stopped importing Iranian crude oil, cutting nearly 10 percent of its global oil imports, and had to obtain more oil from Kuwait and Qatar.

In addition, Seoul hesitated for several years at the Obama administration’s request for independent sanctions on Iran amid concerns that oil trade disruptions would deal a serious blow to the domestic economy. After a series of pointed U.S. discussions that highlighted the fact that Seoul’s cooperation on Iran sanctions was “absolutely vital” and that the United States had supported South Korea following the sinking of its navy vessel by a North Korean submarine in March 2010, Seoul moved toward implementing sanctions.[13] South Korea announced independent sanctions on Iran on September 8, 2010—notably only days after its regional rival Japan announced its own Iran sanctions. Seoul levied new banking sanctions on Iran and temporarily closed the Seoul branch of Iran’s Bank Mellat, which U.S. officials have argued is involved in financial transactions supporting Iran’s nuclear program. These sanctions also prohibited South Korean companies from making new investments in Iran’s oil and gas sectors.

South Korea’s policy dilemma on the sanctions targeting Iran lies partially in its calculations of its broader relations with the United States. Seoul’s policy on the Iranian nuclear issue was influenced by the trade-off between short-term economic losses in Iranian trade versus the long-term consequences of a weakening security alliance with the United States.[14] South Korea also did not want to risk its comparatively more significant economic and trade relations with the United States, with whom it has a free trade agreement. More importantly, Seoul needed U.S. cooperation on North Korea, and thus the Iranian nuclear issue, a foreign-policy priority for the Obama administration, was used as a means to boost bilateral ties.

In addition, Seoul has difficulty delinking the North Korean and Iranian nuclear programs. South Korea has used the recent progress on the Iranian nuclear issue in its policy behaviors toward Pyongyang. Following the Geneva deal, Seoul called on Pyongyang to “learn a lesson from the Iranian case” and “immediately stop its reckless nuclear development programs.”[15] Seoul also expressed hope for further international cooperation, namely from the United States and China, to help denuclearize the Korean peninsula. This has become somewhat of a bargaining chip: South Korean support for U.S. sanctions and pressure over the Iranian nuclear program with the expectation of U.S. and international cooperation on North Korea.

Moreover, as a middle-sized power flanked by larger regional powers such as China and Japan, and a recalcitrant North Korea, South Korea has sought to develop its unique national identity. The South Korean leadership under former President Lee Myung-bak and current President Park Geun-hye has tried to propel itself onto the global stage with its soft power diplomacy. Park declared her foreign policy vision of the “happiness of the global community,” in line with protecting UN values of peace, human rights, and development.[16] Central to the promotion of peace is Seoul’s opposition to nuclear proliferation and weapons of mass destruction.

In sum, Seoul has faced a tough balancing act between protecting its commercial and energy interests in Iran, on the one hand, and responding to U.S.-led pressures to restrict trade and financial links to the Islamic Republic, on the other. Seoul’s broader political, economic, and security relations with the United States will continue to influence its policy stances on Iran. Progress on resolving the Iranian nuclear issue after July 2014—and the subsequent reduction or complete elimination of sanctions on Iran—is in Seoul’s interests. South Korea favors boosting economic and trade relations with Iran despite apparent political differences over the Iranian nuclear program and Tehran’s military and nuclear cooperation with Pyongyang.  Seoul prefers not to risk domestic economic troubles or lose its energy trade with Iran, and it thus seeks flexibility in its policy-making on the Iranian nuclear issue.

[11] Kang Hyun-kyung, “Korea Faces Hurdles to Do Business with Iran.”

[16] “Foreign Minister Delivers a Keynote Speech at a Luncheon Hosted by the UN Association of Korea to Mark the ‘UN Day,’” ROK Ministry of Foreign Affairs website, 24 October 2013, http://www.mofat.go.kr/ENG/policy/un/issues/index.jsp?menu=m_20_40_20&sp=/webmodule/htsboard/template/read/engreadboard.jsp%3FtypeID=12%26boardid=310%26seqno=313245.