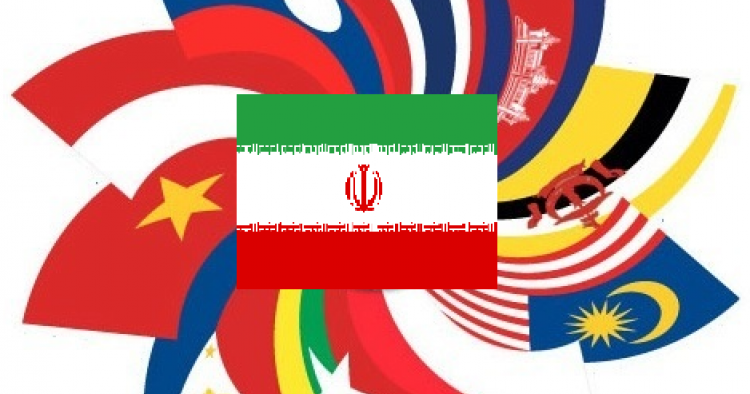 President Hassan Rouhani’s three-nation trip to Southeast Asia in October, which began in Vietnam and was followed by stops in Malaysia and Thailand, culminated in his address to the second Asia Cooperation Dialogue (ACD) Summit in Bangkok.[1] The primary purpose of the Rouhani visit to the region was to stimulate trade and investment — part of a broader pattern of heightened diplomatic activity marking the end of Iran’s international isolation and aimed at fueling the country’s economic recovery.

Contact between Iran and Southeast Asia is not new. Iranian traders have been present in the region for centuries.[2] In recent years, the region has become home to a diverse Iranian diaspora community, of whom more than 100,000 live and work in Malaysia alone.[3] But Iran’s current outreach to Southeast Asia is focused on the future, and primarily on doing business. This is not surprising, given that the Association of Southeast Asian Nations (ASEAN) is a major economic force in Asia and a key driver of global growth.

By 2030, the gross domestic product (G.D.P.) of the so-called ASEAN “tigers” — Malaysia, Indonesia, the Philippines and Thailand — is expected to exceed US$1 trillion.[4][5] Vietnam is also on a rapid growth trajectory, as are the frontier markets of Cambodia and Laos. With the launching of the ASEAN Economic Community (AEC) in November 2015, the ten-member bloc is on track to become a fully integrated market. These bright prospects form the backdrop for Iran’s efforts to reestablish and expand economic ties with the ASEAN countries, which had languished as a result of international sanctions.

This essay provides a brief overview of Iran’s relations with Southeast Asian nations during the sanctions period, looks at the initial results of President Rouhani’s recent visit to the region, and considers the prospects for the further expansion of these ties.

Iran’s engagement of ASEAN countries began in earnest in the latter 1990s as part of its Look East policy, which was adopted largely in response to increasing isolation from western markets. Iran’s development of trade and investment ties with Southeast Asian nations progressed, albeit relatively slowly and unevenly — gaining traction in the mid-2000s and centered on the energy sector.

Between 2004 and 2009, Iran signed a number of promising oil and gas development deals with Southeast Asian partners. (See Table 1.)

However, the very circumstances that caused Iran to pursue these ventures — increasing U.S. sanctions pressure on foreign firms to halt investment in Iran — resulted either in the suspension or cancellation of contracts, or in the slowdown of project implementation. Iran’s liquid natural gas (LNG) deals, for example, fell victim to sanctions. In 2005, Malaysia’s wholly state-owned oil and gas company Petroliam Nasional Berhad (Petronas) withdrew its 20 percent stake in an LNG project in Iran reportedly due to sanctions-related pressure.[12] Other projects too subsequently fell by the wayside. As sanctions further tightened, Iran found itself with no access to foreign majors’ technology for any of its LNG projects.

Iran's crude oil and refined products exports to ASEAN countries suffered a similar fate. (See Table 2.) In March 2010, Petronas suspended shipments of gasoline to Iran.[13] Two months before the 2012 U.S. embargo took effect, Petronas — which up to that time had been a mid-sized Asian buyer of Iranian crude oil (50,000-60,000 bpd) — halted crude oil imports from Iran. Iran-Singapore bilateral trade also plummeted: from US$6.6 billion dollars in 2011 to a record low of about $171 million dollars in 2015.[14] 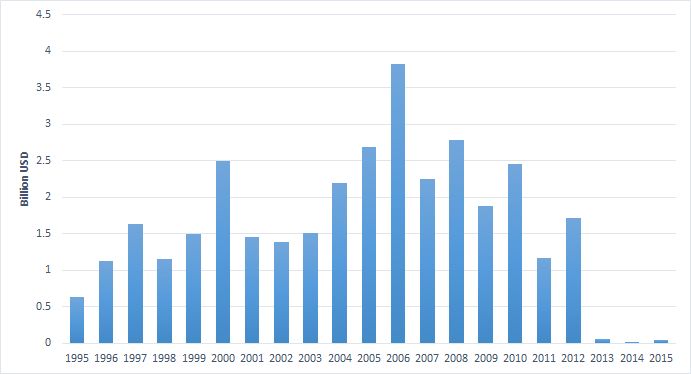 President Rouhani began his three-nation swing through Southeast Asia facing intensifying domestic criticism from conservatives who charge that the nuclear deal has not paid the handsome dividends promised or expected. In wooing Southeast Asian nations, Rouhani emphasized mutual concerns and commonalities: with Malaysia (as with Indonesia), solidarity against terrorism;[15] and with Vietnam, the shared experience of having endured years of war and economic sanctions.[16] But the primary purpose of this trip, apart from its representing another step in the “normalization” of Iran’s relations with the rest of the world, was to boost trade and investment, and by doing so to help jump-start the country’s sputtering economy.

The visits yielded a number of ambitious pledges. Iranian and Vietnamese officials agreed to increase the volume of bilateral trade to $2 billion within five years.[17] Rouhani’s meetings in Kuala Lumpur resulted in the stated goal of restoring the volume of Iran-Malaysia trade to the pre-sanctions level and then doubling it (though no timetable was specified). Yet, it is important to note that Iran’s merchandise trade with ASEAN countries is starting from a very low base. Iran is ASEAN’s 53rd-largest trade partner — ranked just behind Ghana and just ahead of Côte d’Ivoire. (See Table 3.) 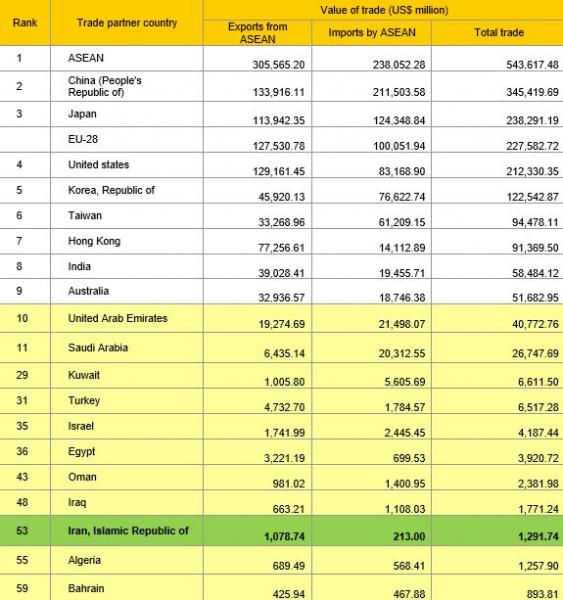 Similarly, before and throughout the sanctions period, the value of Iran's crude oil and refined products exports to ASEAN countries was far less than that of its top four Asian customers: China, Japan, India, and South Korea. (See Table 4.) 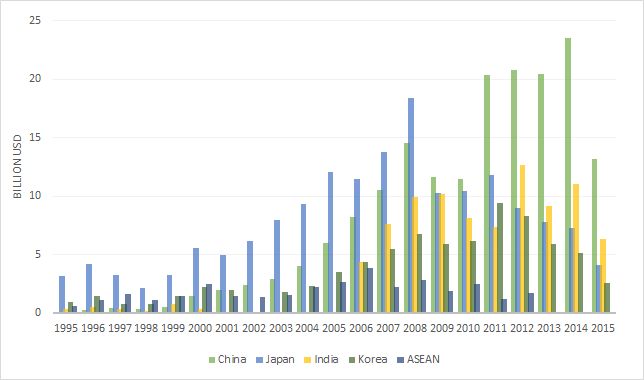 During all three stops on his itinerary, Rouhani and his counterparts vowed to do their utmost to collaborate across a wide spectrum of economic sectors: with Vietnam — fisheries and aviation; with Malaysia — Islamic banking, the halal food industry, and academic and technological fields; with Thailand — automotive and manufacturing industries, as well as agriculture; and with all three — tourism development.[18]

But the primary, and more immediate focus of the Rouhani visit — and of the various interactions between Iranian officials and their ASEAN counterparts both before and since the trip — has been on reviving and expanding energy cooperation. Here, two Iranian priorities stand out: 1) successful re-entry into the global oil market and 2) attraction of foreign investment for the country’s oil/gas infrastructure and field development.

Interestingly, it is with Indonesia and Singapore — two ASEAN countries not on President Rouhani’s October itinerary — that Iran has made the most progress in energy cooperation since the signing and implementation of the Joint Comprehensive Plan of Action (JCPOA) that lifted nuclear-related sanctions.

Indonesia, ASEAN’s largest economy, which became a net oil importer in 2004, now depends on importing foreign oil to meet growing domestic demand. In addition, its national refinement capacity is over-stretched. The country is also on pace to become Southeast Asia’s largest consumer of gas by 2025.[19] It is in this context that Iran-Indonesia energy cooperation has gained some traction.

According to Minister of Economic Affairs and Finance Ali Tayyebnia, Iran can be expected to provide Indonesia with 200,000 bpd of crude oil.[20] Iran’s first shipment as a new supplier of liquid petroleum gas (LPG) to Indonesia arrived in port in October 2016.[21] Indonesia’s state-owned oil and gas corporation Pertamina, which has a strong interest in expanding its upstream footprint, has shown interest in investing in Iranian energy infrastructure projects.[22] According to the company’s CEO Dwi Soetjipto: “Iran is one of Pertamina’s priorities. We’re serious about investing in Iran’s upstream oil and gas, which will help Iran to increase its oil production.”[23] This past August, Pertamina signed a memorandum of understanding (MoU) with the National Iranian Oil Company (NIOC) to conduct oilfield development studies in the Ab-Teymour and the Mansouri fields.[24] Should a field development project materialize, it would be Indonesia’s first investment in Iran’s upstream oil sector.

Additionally, Indonesia, the region’s largest gasoline and gasoil importer, plans to augment its refining capacity by 500,000 barrels per day (bpd) over the next seven years. In August, Iran submitted a proposal — currently under consideration — to build a 100,000-bpd oil refinery (Bontang) on Java and supply the facility with crude oil.[25] The same month, Iran’s Petrochemical Commercial Company (PCC) signed a MoU with Pertamina on petrochemical cooperation, whereby the Indonesian side agreed to directly import Liquefied Petroleum Gas (LPG), polymers, gas condensate and bitumen from PCC and Iran will purchase aromatics from Pertamina.[26]

With an eye toward securing foreign investment, Iranian officials have identified a wide range of economic sectors as areas of potential collaboration with Singapore.[27] There are already signs that Singapore might be interested. Within just a few weeks of implementation of the JCPOA, Singaporean Minister of Trade and Industry S. Iswaran and Singapore Business Federation Chairman Teo Siong Seng led a 67-member delegation to Iran aimed at reestablishing the bilateral trade and investment relationship.[28] The mission culminated in the signing of a Bilateral Investment Treaty (BIT).[29] In remarks delivered at a business seminar held in October in Singapore, Central bank governor Valiollah Seif stated: “The lifting of sanctions has created unprecedented opportunities for investors.”[30]

Southeast Asian countries have welcomed Iran’s reintegration into the family of nations, as illustrated by their endorsement in July of Iran’s accession to the ASEAN Treaty of Amity and Cooperation (TAC). Similarly, the message that has Iran has reopened for business has found a receptive audience across the region.

In seeking to revive and expand economic relations with ASEAN countries during his recent three-country tour of the region, President Rouhani touted his country’s distinctive assets and potential: the world’s largest gas and third-largest oil reserves, a $450 billion economy, a skilled and educated workforce, 80 million people (consumer base), and a strategic position that could enable it to serve as a western gateway to Middle Eastern and European markets.

Yet, Rouhani and his entourage did more than simply highlight Iran’s competitive advantages during their brief visit to the region. They made clear that Iran is looking to capitalize on ASEAN countries’ success and bright prospects to help meet its own urgent needs — with no need being greater than that of foreign investment, particularly in the energy sector. They also made clear that Iran is seeking to develop comprehensive economic partnerships with ASEAN countries — away from the simple oil-for-goods model.

Whether this charm offensive bears fruit will depend, among other things, on Iran’s ability to overcome payments and other banking system obstacles, as well as residual U.S. sanctions and restrictions on dollar transactions, and to create an enabling environment for business through instituting legal and regulatory reforms.

[1] Asia Cooperation Dialogue (ACD) is a 34-country Asian regional cooperation framework initiated by Thailand in 2002 with the aim to connect the countries in Asia and to build an Asian community.