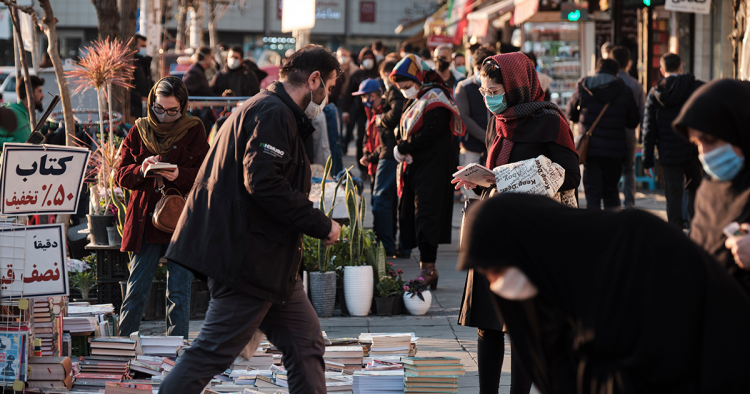 The news coming out of Iran does not paint a pretty picture of its economy. Economic mismanagement, widespread corruption, weak legal and institutional capacity, and unfavorable business regulations, alongside the unprecedented U.S. financial and economic sanctions and the coronavirus pandemic, have been choking the Iranian economy. However, with a population of 85 million, half under the age of 30 and highly educated, as well as a strategic location on the Persian Gulf and vast reserves of energy and other natural resources, including wind and solar energy, Iran’s economy has incredible potential waiting to be unlocked. Should negotiations with the new Biden administration in Washington pave the way for a return to the 2015 Joint Comprehensive Plan of Action (JCPOA) and a rolling back of sanctions, there could be a significant upside for Iran’s economy, but only if meaningful steps are also taken to address domestic impediments.

The impact of sanctions

Sanctions have inflicted considerable pain on the Iranian economy by blocking or hampering oil sales, trade, financial transactions, technology transfer, and foreign direct investment (FDI). Combined with mismanagement, this has caused the Iranian economy to contract by about 6% and 6.8% in 2018 and 2019, even as the global economy registered growth of 3% and 4% in the same years. By blocking FDI and discouraging foreign investors and companies from doing business in the country, sanctions have also indirectly contributed to the institutionalization of corruption and the worsening of the business environment in Iran. This is because the involvement of foreign investors and business partners often contributes to greater transparency, stronger rule of law, and more effective and efficient institutions.

Under a sanctions-free regime, one can expect the Iranian economy to regain access to the FDI and technology transfers it needs to kickstart its sluggish economy. In addition to other domestic economic and legal reforms, this could unleash Iran’s inherent economic potential and make the most of its vast natural resources, large and young consumer market, highly educated labor force, and strategic location.

Natural resources: Oil and gas, but also solar and wind

Energy is the single most important ingredient in any economic activity. While Iran is home to about 1% of the world’s population, it holds 9% and 16% of the world’s proven crude oil and natural gas reserves, respectively. Iran also has considerable reserves of other natural resources and minerals. According to estimates from the U.S. Geological Survey, it has major reserves of feldspar (2nd largest in the world), barite (5th largest), gypsum (5th largest), fluorspar (8th largest), and iron ore (10th largest), as well as substantial reserves of other strategic minerals, like copper, manganese, zinc, chromium, and gold. Overall Iran is home to an estimated 5% of world’s metal constituent reserves, but much of its vast reserves are untapped. Historically, mining has contributed less than 1% of the country’s GDP. Moreover, despite huge natural gas reserves, Iran’s production barely meets domestic needs and it accounts for less than 1% of total global gas exports.

In terms of renewable energy, too, Iran can easily meet all of it electricity demand through wind and solar sources. Electricity generation from solar farms and photovoltaic cells is economically most feasible in areas with direct normal irradiation (DNI) above 5 KWh per meter square per day, which is true in more than 75% of the country. Also, Iran is located in a wind belt, where wind speed at the height of 40 meters averages more than 5 meters per second — the speed required for the development of utility-scale wind farms — in at least a quarter of the country. Therefore, Iran’s mining, oil and natural gas, and renewable energy industries can benefit substantially from domestic and foreign investments and technology transfers and are widely considered some of the most attractive sectors to invest in.

With a population of around 85 million, half of which is below the age of 30, Iran has a large and young domestic consumer market and labor force. Its population is the second largest in the MENA region, following Egypt with 102 million people, and the 18th largest in the world. Given four decades of economic isolation from the rest of the world, albeit of varying degrees, the Iranian consumer market has been on the lookout for any opportunity to open its doors to global consumer brands and trends. Iran’s young, highly educated, and globally aware population is the main driver for this.

In the past two decades, Iran’s labor force has become increasingly well educated. The adult literacy rate is near 90%, compared to a regional average of about 80%. More importantly, nearly 70% of Iran’s labor force has a university-level education and young Iranian women are at par with men in terms of educational attainment. However, because of mainly cultural reasons and the traditional roles Iranian women are expected to play, only half of the Iranian women with advanced education participate in the labor force, while this figure stands at more than 80% for men. In the past decades, labor market conditions in Iran have improved significantly in women’s favor, and policies aimed at encouraging greater female participation could benefit the Iranian economy by tapping into the large number of university-educated females who remain outside the labor force.

A more favorable post-sanctions economic environment combined with better domestic economic planning could help create much-needed jobs for millions of university-educated Iranians. Over the past two decades, the Iranian labor market has not been able to fully absorb the large number of university graduates, and the official unemployment rate among this group has been around 20%, with underemployment figures approaching 40-50%. Faced with harsh labor market conditions, especially since the imposition of sanctions, many of Iran’s top graduates have migrated to countries with more favorable job prospects, costing the economy billions of dollars a year. The late Maryam Mirzakhani is just one example of the millions of talented Iranian expats that could potentially contribute to the country’s economy and development if political and economic conditions were to improve.

Finally, with a 100% electrification rate and its vast network of power plants, electricity grids, natural gas lines, roads, railroads, airports, and ports in both the north and south of the country, Iran has the necessary infrastructure to support a growing and dynamic economy. With access to open waters and a strategic location as a gateway between the Middle East and Central and Southwest Asia, Iran is an important partner in Russia’s North-South trade corridor and plays a central role in China’s massive One-Belt-One-Road initiative, an international development project involving more than 1,700 infrastructure projects and investment of over $1 trillion in 70 countries in Asia, Europe, and Africa.

Iran’s economic potential is waiting to be unlocked. The recent introduction of the sovereign bond market, improvements in the tax laws and its collection mechanism, introduction of mobile banking, and automation of several government and municipality services are a few positive steps taken in previous years to improve the economic and bureaucratic environment in Iran. However, much more still needs to be done. In particular, meaningful steps must be taken to promote the growth of the economy and the private sector through implementing sound economic policies, addressing the unfavorable business environment, and tackling increasing levels of systematic economic and financial corruption in the country. The government must also act swiftly to reform the country’s inefficient banking industry and reduce its growing budget deficits. Eliminating or at least substantially reforming the massive, wasteful, and unjust energy subsidies would be an important step on this front.

Opportunities may arise sooner rather than later, particularly if the new administration in Washington decides to re-engage with Tehran over the JCPOA. The local business community in Iran has hopes that the removal of choking sanctions under the Biden administration will provide temporary breathing room for the economy. However, without effectively addressing the numerous other domestic challenges it faces from corruption to economic mismanagement, the vast potential of the Iranian economy will continue to remain unrealized.