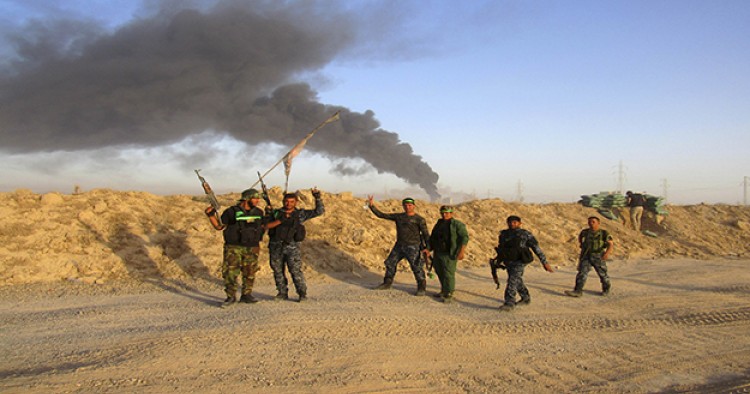 While Iraq’s efforts to dislodge the Islamic State (ISIS) from Mosul have proceeded better than expected, the Iraqi political class must now face the complicated and divisive matters that it has failed to address for years. While the battle to liberate all of Iraq from ISIS is not over, three issues remain sources of tension: decentralization, the presence of foreign troops in the north, and the status of disputed territories such as Kirkuk, between the Kurds and the central government. These unresolved issues coincide with intra-Sunni and intra-Shiite divergent visions regarding Iraq’s future.

The Formation of Regions

Osama al-Nujaifi, one of Iraq’s three vice presidents and a prominent Sunni politician, and his followers have been outspoken in their call for decentralization in post-ISIS Iraq. Nujaifi asserts that each of the 18 provinces in Iraq should be able to become a semi-autonomous region within the country, much like Iraqi Kurdistan. On the other hand, Nouri al-Maliki, another Iraqi vice president, opposes the immediate establishment of regions following the defeat of ISIS, arguing that these areas would be “created by force” amid political, military, and sectarian tensions. Maliki is widely perceived as the political representative of the Iranian-backed Shiite Popular Mobilization Units (P.M.U.) whose political clout has been increasing proportionally to their growing military role in support of the Iraqi national army. Maliki’s stance implies that the P.M.U. don’t favor decentralization, and could impose their will militarily.

Decentralization will be a major issue in Iraq’s future, especially as the expanding presence of the Iranian-armed Shiite-dominated force in traditionally Sunni areas, as well as accusations of human rights violations levied against it, have heightened Sunni concerns of possible efforts to impose demographic changes in their territories. This comes at a time when organizations representing several of Iraq’s persecuted minorities—namely Christian, Yazidi, Turkmen, and Shabak—have formed a coalition calling for the establishment of a semi-autonomous region for minorities in northern Iraq spanning Sinjar, Tal Afar, and the Nineveh plains.

Foreign Troops: A Source of Conflict

While tensions between the Iraqi and Turkish governments over the presence of Turkish soldiers in Bashiqa—15 kilometers northeast of Mosul—have largely subsided, the issue continues to be problematic and may lead to armed strife. The Iraqi government considers the Turkish presence on its soil a violation of Iraq’s sovereignty, while the leader of the P.M.U. Hadi al-Ameri has identified it as part of a “project to divide Iraq.” Turkey, which maintains close ties with the Kurdistan Regional Government and Osama al- Nujaifi, has said that its presence is strictly designed to train Kurdish Peshmerga forces and volunteers of the Nineveh Guard – a Sunni force led by Nujaifi’s brother, Atheel al-Nujaifi. The NATO member has indicated that it will continue to be present militarily in Iraq until the end of the battle for Mosul. Ankara’s presence may be linked to its concerns over the possible entry of P.M.U. fighters into the largely Sunni city of Mosul and the predominantly Turkmen city of Tal Afar, which may trigger demographic changes not in Turkey’s favor. In case of a Turkish projection of power in order to guarantee a role for the Nineveh Guards in northern Iraq, Iran is unlikely to stand still and a confrontation will likely ensue between the Iranian-backed P.M.U. and Nujaifi’s guards.

Moreover, Turkish officials are also monitoring closely the presence of the Sinjar Resistance Units (Y.B.S.), an Iraqi force affiliated with the Kurdistan Workers Party (P.K.K.), a separatist organization deemed a terrorist entity by both Ankara and Washington. Ankara fears that the P.K.K. may be attempting to create a logistics base to facilitate operations between Iraq and Syria in the border area of Sinjar. The mostly Yazidi Y.B.S. has already clashed with the Rojava Peshmerga, a Syrian Kurdish force allied with the Turkish-backed president of Iraqi Kurdistan, Massoud Barzani, over control of Sinjar. These entanglements risk igniting a wider conflict between pro- and anti-Turkey Kurds. Moreover, the chief of staff of the Peshmerga, Jamal Iminiki, has accused the P.M.U. of financing the Y.B.S. in Sinjar, adding that the force is directed by Iran and its allies to open a corridor into Syria and complete the Shiite crescent from Tehran to Beirut. In January, the P.M.U. attacked Peshmerga positions in Sinjar. These attacks coincided with threats by P.M.U. senior leader Jawad al-Tlebaway, warning the Peshmerga of “swift military action” in case it did not evacuate liberated areas.

The Struggle over Disputed Territories

Prime Minister Haider al-Abadi said during a visit to Iraqi Kurdistan in February that the disputed areas lying on the borders between federal government territories and Iraqi Kurdistan—namely the multiethnic and oil-rich Kirkuk province—“should be turned into agreed upon areas,” yet the issue remains unresolved and may escalate into a large-scale conflict. While the K.R.G., which claims the Kirkuk province as part of its historical territory, has controlled about half of the province, including Kirkuk city as well as two of the province’s five oil fields since the 2014 ISIS incursion, the other half of the province remains under ISIS control. Disagreements over who will rule the portion formally controlled by ISIS continue to impede its liberation.

On the political front, the Iraqi government decided to exclude Kirkuk from the upcoming provincial elections slated for November 2017, due to the city’s disputed status. Kirkuk has not held local elections since 2005, when Kurdish parties, buoyed by the return of thousands of Kurds displaced by Saddam’s Arabization policy and a large boycott by Arabs and Turkmen, took 26 of the 41 seats in the local provincial council. Kurdish parties, while disagreeing on intra-Kurdish matters, are united in their demand to hold elections in Kirkuk to legitimize the favorable demographic changes that have taken place in the province. Kurdish authorities in the province have threatened to prevent Arab internally displaced persons from voting in the elections if the province is not allowed to participate in the process as well.

Additionally, the issue of Kirkuk’s oil remains a sticking point in its unresolved status. The Iraqi government in February signed a memorandum of understanding with Iran to carry out a feasibility study of constructing an alternative to the current pipeline that carries oil to the international market through Kurdish territories and Turkey. The alternative pipeline would instead carry oil through Iranian soil, thus depriving the cash-stricken K.R.G. of an important financial resource and Turkey of economic leverage over the Iraqi central government.

Moreover, Peshmerga forces are fearful of the buildup of the P.M.U. south of Kirkuk. A Kurdish commander suspects that the P.M.U. maybe readying for a fight against the Peshmerga after defeating ISIS. The P.M.U., who have established a strong presence in disputed territories south of Kirkuk—in both Diyala and Salah al-Din provinces—during the fight against ISIS, have also delayed the return of 14,000 internally displaced Sunni families currently residing in Kirkuk to their homes in Diyala. This has alarmed Kirkuk’s Kurdish governor Najmaldin Karim, who believes that the P.M.U. are “killing two birds with one stone, by getting rid of the Sunnis (in Diyala) and Arabizing Kirkuk.”

In Salah al-Din province, the city of Tuzkhurmatu, which is near the southern border of Kirkuk and is home to large Kurdish and Shiite Turkmen populations, has witnessed heavy clashes between the two communities. The K.R.G. considers it part of Kirkuk and thus of Kurdistan, while the city’s Turkmen residents—backed by the P.M.U.—consider it a part of Salah al-Din province. The fighting has led to the segregation of the city into Kurdish and Turkmen neighborhoods, each separated by concrete barriers.

Internal divisions, both political and ideological, within the Shiite National Alliance, the largest Shiite bloc, have prevented agreement on a unified vision. Ammar al-Hakim, head of the Citizen Coalition within the alliance, is championing a plan known as the “historic settlement.” The proposal calls for settling all issues on a non-zero-sum basis with the help of the United Nations Assistance Mission for Iraq (UNAMI). Meanwhile, the Shiite cleric Muqtada al-Sadr has launched a contending plan in February advocating social reconciliation, the integration of the P.M.U. within the national forces, and ending all foreign meddling in Iraqi affairs, also with UNAMI’s support. The Iraqi parliament approved a law in November 2016 deeming the P.M.U. as a legitimate body within the country’s security apparatus. However, the law, which was opposed vigorously by some Sunni factions in parliament, does not outline the future role the P.M.U. will have within the Iraqi political process, as that will mainly depend on what role Iran wants them to play. On the other hand, Maliki aims to regain the premiership through alliances that achieve a political majority comprising the P.M.U. as well as many like-minded Sunni politicians–namely the speaker of parliament Salim al-Jobouri. This comes at a time when the Marja`iyya, the Shiite religious authority which gave rise the P.M.U. via its fatwa for volunteers against ISIS in 2014, has largely retreated from the political scene after its vociferous calls for reform did not materialize.

There also appears to be a split within the main Sunni bloc, the Alliance of Forces, particularly between the Jobouri and Nujaifi wings of the alliance. These differences are believed to be manifesting themselves in the process of finalizing a document that outlines the Sunni vision for the future of the political process before submitting it to the U.N. Jobouri seems willing to propose a ‘freeze’ of controversial issues, such as the formation of regions and the newly ratified P.M.U. law, until a national agreement is reached on them. Nujaifi appears insistent on demanding that the central government implements confidence building measures to allay Sunni concerns regarding demographic changes, the P.M.U. law, and the Sunni prisoners before the start of reconciliation talks.

Sunni politicians are also split between those that support the Turkey-sponsored Ankara conference, which was held on March 8 and gathered several prominent Sunni politicians to unify the Sunni front, and those that toed the Iraqi’s government’s line by rejecting it. The conference, which reportedly was attended by representatives from the U.A.E., Qatar, Jordan, and Saudi Arabia, is believed to be a continuation of efforts by Sunni countries in the region and the United States to create a Sunni consensus on a vision for post-ISIS Iraq. These efforts also aim to unify the Sunni front in one political bloc ahead of the upcoming legislative elections slated for 2018. While the outcome of the Ankara talks remains unclear, a leaked audio of Mohammad al-Karboli—a pro-Jobouri Sunni parliamentarian who participated in the conference—revealed the formation of a large Sunni alliance that serves to unite the different Sunni factions under one vision opposed to sectarianism, and the division of Iraq into multiple regions. The new alliance which, per Karboli, will be led by a committee that includes Jobouri, does not preclude Sunni politicians from running separately in the upcoming elections, but their votes will go toward the alliance.

In conclusion, while the Islamic State provided a common enemy for Iraqis of different ethnic and religious backgrounds, its defeat in Mosul will reorient domestic attention to the unresolved problems that arguably weakened the Iraqi state and paved the way for the terrorist incursion. Thus, after ISIS, the Iraqi political class must address the difficult and long overdue concerns raised by the country’s different communities.