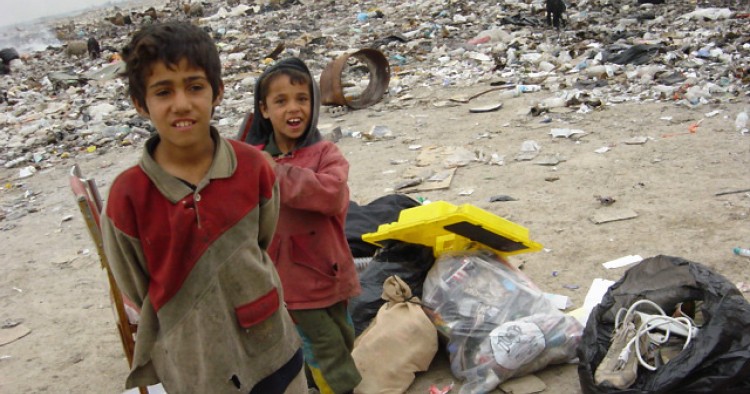 Over the past several decades, and especially in the past two years, Iraq has suffered from one of the worst displacement crises in the world.

While new displacement has slowed to a trickle in 2008, the conditions of those already displaced continue to deteriorate, and prospects for those returning to their homes are grim. The plight of internally displaced Iraqis and those who have crossed international borders in search of refuge remains largely unknown and unaddressed.

Iraq Suffers from a History of Forced Displacement

During Saddam’s reign, Iraqis were expelled from their homes (as part of Saddam’s Arabization campaign), fled fighting from the Iran-Iraq and Gulf Wars, were forced to find new livelihoods and homes due to the draining of the marshlands in the south, escaped violence due to the suppression of the 1991 uprising against Saddam’s government, and fled due to human rights abuses (such as the al-Anfal campaign).

Following the overthrow of Saddam’s government, Iraqis continued to be displaced due to military operations and, increasingly, sectarian violence, lawlessness, and general crime.

Over 2.8 million people remain displaced within Iraq, with an additional 2–2.5 million who have fled to neighboring countries, primarily Jordan and Syria. While substantial attention has been paid to Iraqi refugees, those who were forced to flee but have stayed within the borders of Iraq, known as internally displaced persons (IDPs) are often overlooked. Iraqis who were not able to leave the country are frequently the worst off; they did not have the financial ability or contacts abroad in order to leave the country, and thus had to seek refuge within the country’s borders.

Almost 1.6 million of the 2.8 million displaced within Iraq fled in the past two years alone. The majority report fleeing due to direct threats to their lives; this often takes the form of death threats, such as letters, pamphlets, or mobile phone text messages warning them to leave or face potential death. The International Organization for Migration (IOM) has assessed more than one million of these recently displaced in order to better understand their conditions and needs.

Iraqis tended to flee from mixed communities, especially in Baghdad (the place of origin for almost 65% of IDPs), to areas of the same religion and sect. Many Shi‘a Muslims fled the central provinces/governorates to the Shi‘a-dominated south; Sunni Muslims fled mixed communities in the south and center to Sunni communities in the center and north; and small percentages of religious and ethnic minorities, such as Christians, Yazidis, and Turkmens, fled to small minority enclaves or left the country altogether.

The Conditions for Many Displaced within Iraq are Grim

The majority of Iraqi IDPs (66% of those assessed by IOM) are unemployed and without the means to cover basic needs, such as rent, household goods, health care, rising fuel costs, and even food. Some who are less fortunate must find shelter in abandoned buildings or build makeshift housing on public land, facing the constant threat of eviction. These “homes” tend to be overcrowded and lack basic services such as running water, electricity, or sanitation facilities.

Many Iraqis rely on the government’s monthly Public Distribution System (PDS) food rations. However, once they flee their homes, their food ration card is no longer valid until they officially transfer the registration. This requires returning to their place of origin, which is impossible for people fleeing violence and conflict. Only 29% of IDPs report regular access to these food rations, and only 41% report receiving food assistance from another source.

Probably one of the hardest hit sectors of Iraq’s services over the past decade is the health care system. The exodus of healthcare professionals that has occurred since the 2003 invasion, a severe shortage of medicine and equipment, and damage to medical facilities have left the current healthcare system crippled at best. This only exacerbates poor living conditions for IDPs, who often dwell in unsanitary conditions. A lack of access to quality healthcare increases the spread of disease and deterioration of chronic health conditions. Fourteen percent of interviewed IDPs report that they have no access to healthcare services, and 30% report that they cannot access the medicines they require. pecialized health assistance, such as gynecology or surgical care, is also difficult for all Iraqis to acquire.

Water shortage and lack of access to clean water also negatively affect IDPs’ health and living conditions. IDPs increasingly draw water from drainage canals, broken pipes, or polluted streams. As a result, more and more IDP children suffer from intestinal and skin diseases. Twenty percent of interviewed IDPs do not have regular access to water, a number which is likely to increase with the periods of drought affecting Iraq this year, especially in the north.

IDP children are the most vulnerable and significantly affected by displacement. In addition to suffering from substandard living, improper nutrition, and lack of access to appropriate healthcare, IDP children often exhibit psychosocial scars due to witnessing the acts of violence that led to their families’ displacement. A lack of psychosocial care throughout the country means that IDP children must internalize the trauma of their flight and the hardships of their living conditions. In addition, when asked if all of their children were able to attend school, only 18% of assessed IDP families responded affirmatively. Lack of money and the need for children to work were the most frequently provided reasons for non-attendance.

Sixty percent of interviewed IDPs report that they would like to return home. Due to deplorable living conditions, in addition to improved security throughout Iraq and the condition of illegal living status for Iraqis who fled the country, more and more IDPs and refugees are returning home. However, in some cases, returnees cannot come back to their original homes. In some neighborhoods and cities, homes were destroyed or are currently occupied, while other areas are still unsafe. In fact, over 25% of IDPs report that another citizen is currently occupying their home, and over 15% report that their property has been destroyed.

Once they do return, Iraqis sometimes face the same conditions at home as they did in their places of displacement. Of those returnees who have been assessed by IOM (over 9,000 individuals), less than 45% of male heads of household and 3% of female heads of household are employed. Only 59% report that their home is accessible and in good condition, and only 36% report regular access to PDS food rations. Clearly, conditions upon return are barely an improvement from those in areas of displacement.

Although fewer and fewer people in Iraq are fleeing their homes and an increasing number are beginning to return, the situation in the country for many of the internally displaced and returnees remains dismal. While there is a clear need for humanitarian assistance, donor funding to help these populations is decreasing. At a time when Iraqis need it most, the international community should increase its awareness of the situation and provide assistance in order to avoid the further deterioration of conditions for these vulnerable populations.