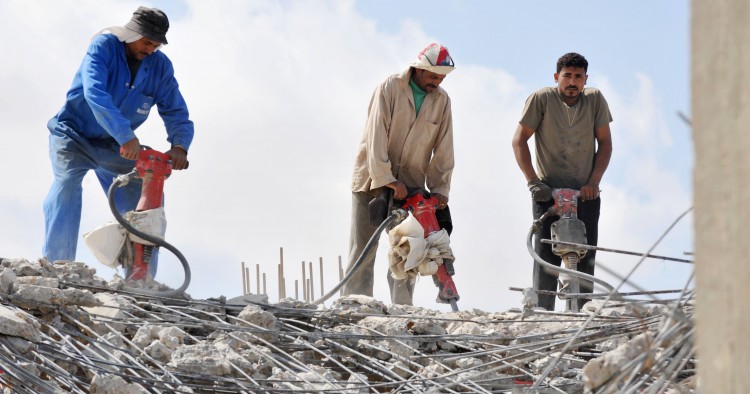 Half a century of outward flows of workers and members of their families to Europe, the Gulf States, North America, and Australia had accustomed Arab Mediterranean countries to regard themselves as sources rather than as hosts of international migration. Due to widening gaps in well being and security, however, their southern and eastern neighbors started to look at these countries in a different way - as richer and safer places than their own and a possible stopover en route to the West. Gradually, Arab Mediterranean countries became magnets for migrant workers and asylum seekers from countries struggling with development and often torn by civil and military conflicts. In contrast with their long practice of dealing with their own expatriate citizens, governments were not prepared for large-scale immigration of non-citizens. For lack of specific tools and, more often than not, in the absence of will to accept and integrate new comers, “irregularity” grew in parallel with immigration.

Migration is irregular as soon as entry, stay, or employment is unauthorized. It occurs not only when migrants violate regulations on the movement, settlement, and access to labor of their host countries, but also when a change in regulations affects the migrants’ situation, sometimes without them knowing that they are infringing the law. It happens,

for instance, if protectionist measures are suddenly taken that reserve to citizens a number of informal activities that were so far unregulated, unrecorded, and therefore de facto accessible to foreigners without work permits. In Jordan, for example, between one third and one half of the more than 200,000 Egyptian workers employed mostly in agriculture were made irregular by new legislation on labor in 2007.[1] Among the estimated 4.5 million immigrants that Arab Mediterranean countries host at present, 2.8 million or more (63%) are actually or potentially irregular migrants (Table 1).

Three different and often intermingled motivations explain irregular migration in the region (Table 2): 1) the search for employment among migrant workers who are not eligible, or do not apply, for regular documents; 2) the search for asylum among people who have a well-founded fear of being persecuted in their country of nationality and are in need of protection, but cannot (or sometimes do not wish to) be recognized as refugees in their country of asylum and are therefore de facto refugees; and 3) the search for a passage among in-transit migrants initially en route for a further destination which they cannot reach for lack of entry visa.

Libya is the largest receiver of irregular (as well as regular) international migration in the region. Like the Gulf States, oil and gas wealth has transformed the country into a major destination for migrant workforce. However, several economic downturns - as a consequence of international sanctions (1992-1999) or low oil prices (early 2000s) - have translated into job destruction and unemployment among migrants so that many of them lost their right to residence. Detention camps were set up and hundreds of thousands deported in 1995 and between 2003 and 2005, mostly to Sub-Saharan countries.[2] As if visa policy was subordinated in Libya to foreign policy, Arabs had been first exempted from entry visas in the name of Pan-Arabism, then Africans in the name of Pan-Africanism, before both suddenly required visas in 2007, when the government changed its stance on migration in a strategic shift to please Europe and cooperate in the “fight against illegal migration,” a leitmotiv of EU migration policies. Libya remains the largest receiver of Sub-Saharan migrants and a number of them, coming from unsafe countries, could claim their right to be recognized as refuges. But Libya, not a party to the Refugee Convention of 1951, prefers to consider all foreigners as migrant workers, since it is unwilling to adopt any legislation on asylum that would contain a non-refoulement rule and prevent its government from deporting a number of undocumented migrants.

Syria and Jordan come next, each with more than half a million migrants in potentially or actually irregular situations, a majority of whom are Iraqi refugees of the most recent wave that fled Iraq under US occupation between 2005 and 2008. These countries, which are not signatories of the 1951 Refugee Convention and already host the largest Palestinian refugee population, have welcomed Iraqi refugees as “guests,” i.e. temporary visitors expected to return soon to their homes. Confronted with huge numbers, however, they both started to tighten the conditions of entry and stay set for Iraqis, putting many of them in a situation of latent irregularity. Numbers at stake are not reliable. The United Nations High Commissioner for Refugees (UNHCR) has repeatedly published estimates of more than two million Iraqi refugees worldwide, out of which between 700,000 and 1.2 million would be in Syria and 500,000-750,000 in Jordan. However, given the emergency situation, no census of the Iraqi refugee population was ever conducted, and there are clues that published numbers have been significantly inflated.[3] If this were not the case, how could one explain that “only” 180,000 expatriates voted in the Iraqi elections of March 2010 despite a reportedly high turnout? How could one reasonably believe that in Syria, where the vast majority of Iraqis are reported to live in the Damascus area,[4] one out of every three to four persons in the capital city is an Iraqi refugee? In Egypt, Iraqi refugees were commonly estimated at 100,000-150,000 until a statistical survey of 2008 found a much lower count of 17,000.[5]

While Lebanon also hosts a sizeable Iraqi refugee community, the largest group of irregular migrants in the country is formed by the possibly 400,000-500,000 Syrian workers employed without a regular work permit and who make up one third of its total workforce.[6] Syrian workers had been in Lebanon since the 1950s; however, their number increased owing to the civil war of 1975-1990. The massive emigration of Lebanese citizens that took place during the conflict left a vacuum in the labor market. Exercising tight military control over Lebanon, Syria facilitated the establishment of its own citizens there, in disregard of Lebanese labor legislation.

Egypt is a destination for migrants from the Nile Valley and the Horn of Africa; Sudanese are Egypt’s largest non-national community. However, no one can tell how many of them live in the country, except that their number lies somewhere between a few tens of thousands and millions. The reason is that Sudanese typically reside in Egypt without being re-registered as foreigners, by virtue of the freedom of circulation and residence that linked the two countries for almost two centuries. It stopped between 1995, when Egypt imposed visas on Sudanese after a failed attempt by a Sudanese to assassinate its President, and 2004, when the two countries signed an agreement restoring the freedom of movement, residence, and work. However, because the agreement was never fully implemented, many Sudanese migrant workers or refugees in Egypt are still in irregular situations, despite the de facto tolerance that protects them from deportation.

Countries of the central Maghreb (Algeria, Morocco, and Tunisia), as well as Mauritania do not have large numbers of irregular migrants compared with Libya and the Mashreq. Most of these migrants - in the tens of thousands, maybe more in Algeria[7] - come from Sub-Saharan Africa.[8] They form a mixed population of undocumented workers attracted by the local labor market (especially in Algeria), unrecognized refugees and migrants in transit. The last category overlaps with irregular migrant workers, since transit often takes a long time and migrants have no choice but to earn an income and find a job without a permit.[9] In the same way, it is not always possible to distinguish them from refugees, as they may come from the same countries and travel alongside asylum seekers to form what UNHCR terms movements of “mixed migration.”[10] Transit migration through Arab Mediterranean countries has not been growing as much as it has been shifting from one country to the other over the last decade. When a route closes because controls tighten, another - usually longer and riskier - opens: transit first peaked in Morocco[11] at a few cables’ length away from Europe, then in Algeria and Mauritania, and lately in Libya.

The growing category of irregular migrants points to a deficit in international law. As non-citizens, migrants usually enjoy fewer rights than citizens. But irregular migrants are denied even the right to reside, i.e. to be where they actually are. They must hide and live in limbo, with limited freedom of movement, no legal protection, poor access to basic rights, and high exposure to exploitation, destitution, and deportation. Whether they had arrived as undocumented workers, unrecognized refugees, or migrants in transit, they merge into one single, disadvantaged, and unorganized group. In the developing economies of Arab Mediterranean countries, they form the cheapest and most tractable workforce to take on jobs which nationals are no longer willing to accept. From the rare surveys among irregular migrants, it does not emerge clearly whether they consider the situation found in the host country to be better or worse than the one left behind in the home country. The only certainties are that irregular migration has brought a pool of flexible manpower profitable to local employers and that there is no reason why this should recede. As sources and hosts of irregular migration, Arab Mediterranean countries know the two sides of the coin. For this reason, they would be in the best position to push the idea of an international migration law onto the global agenda.

[8] Hein de Haas, Irregular Migration from West Africa to the Maghreb and the European Union: An Overview of Recent Trends, IOM Migration Research Series No. 32 (2008).