Israel: The Future is Asia 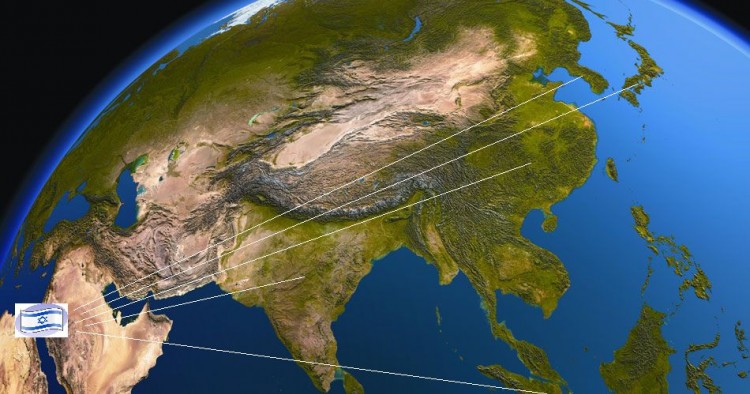 The forces of globalization have not erased national boundaries. Nor have they shortened the physical distances between countries. Tel Aviv and Tokyo still lie more than 9,000 kilometers apart. The direct flight time between Ben Gurion Airport and Beijing Capital Airport remains just over nine hours.

Yet, in recent years, the new business frontiers of Israel and Asia have converged. Israeli companies have been tapping into Asian markets and sources of investment. Meanwhile their Asian counterparts' search for new engines of growth through business and technological innovation has drawn them to Israel. In fact, Israeli companies today are active throughout Asia and Asian firms with a presence in Israel have begun to shed their low profile. In addition, there is a growing community of Israeli scholars and research students in the field of Asian Studies. And Israel maintains diplomatic relations with most Asian countries. Taken together, these circumstances seem to augur a bright, shared future. Nevertheless, political, cultural and economic factors have constrained the further strengthening of Israeli-Asian ties.

This essay series investigates Israel's expanding relations with Asia -- the forces propelling and impeding their growth, the progress made in their development, and their as yet unrealized potential.

Sep 4, 2014
Delivering Innovation to the “Zero-Defects” Culture: Japanese Conservatism Meets Israeli Risk-Taking
Kenneth Alan Grossberg
Despite the fact that Japan was one of the first countries in the world to recognize Israel as an independent nation, and despite the fact that relations between the two peoples have been generally amicable, the business linkages that would have been mutually beneficial have been very slow to develop. Only quite recently has there been a change in the wind that promises much more positive economic interaction between Israel and Japan as we enter the second half of this second decade of the new millennium.

Sep 15, 2014
Upgrading Israeli-South Korean Relations: Can Seoul Tilt in Favor of Jerusalem?
Alon Levkowitz
Israel has come to recognize South Korea as being of increasing importance to its economic, security, and diplomatic interests. Meanwhile, Israeli innovation has attracted South Korean businesses and investors. As a result, Israel-South Korean economic ties have grown in recent years, albeit with little fanfare. These positive developments could eventually lead Seoul to alter its official policy toward Israel.

Sep 18, 2014
India’s National Security Imperatives and Indo-Israeli Strategic Cooperation
Jacob Abadi
Over the past two decades, successive Indian governments have managed to develop increasingly extensive ties with Israel without damaging their relations with Arab countries. This essay discusses the reasons that India, which had distanced itself from Israel for four decades, decided to pursue security cooperation, and assesses the prospects for its further development.

Sep 21, 2014
Israel and Indonesia: Window of Opportunity?
Emanuel Shahaf
Israel and Indonesia are two nations whose relations―due to political circumstances―have yet to fulfill their enormous potential. Were there to be progress in peace negotiations between Israelis and Palestinians, a window of opportunity could open for Indonesia's new president to take practical steps that would begin to unlock this potential.

Sep 24, 2015
On Probation: The Open-Ended Future of Sino-Israeli Relations
Yitzhak Shichor
China, “a quarter of mankind,” can no longer be ignored.[1] Economic reform is not the essence of Deng Xiaoping’s revolution; opening China to the outside world is. Israel is part of this phenomenon. After thirty years of no relations (and even mutual hostility); ten years of unofficial relations; and more than twenty years of official relations, both countries have managed to overcome their earlier illusions and to come to terms with the limits of their bilateral relations.

Nov 27, 2018
The Israel-China-U.S. Triangle and the Haifa Port Project
Roie Yellinek
This essay discusses the Shanghai International Port Group (SIPG) contract to operate the northern port in Haifa in terms of Israel's relations with China and the United States. The author urges greater caution by Israeli policy-makers and the public and closer cooperation between Israel and the U.S. in managing the risks associated with Chinese investment and commercial activities in critical sectors of the Israeli economy.

Selected from the MAP Cyber Library:

This paper first discusses the early contacts between Jewish organisations in the US and Israel with Chinese scholars, focusing specifically on the indigenous development of Jewish studies in China in the 1980s and 1990s as an outcome of this initial contact. The second section examines the evolution of pro-Israeli advocacy in Chinese academia from 2000 onwards while placing it firmly at the backdrop of the larger changes sweeping organisational and conceptual approaches to Israeli advocacy amongst the global Jewish communities of the West. This section also looks at the discourses and rationale driving pro-Israeli advocacy in China.

…This paper examines India’s trade relations with Israel and the Arab countries of the Middle East. We shall examine the scope and depth of India’s commerce with Middle Eastern economies, and we shall depict the balance India must find between these two sets of relations, with a special focus on how the breakdown of the Arab-Israeli peace process influences India's economic and political relations with Israel and its neighbors …

Ever since the establishment of full diplomatic relations in January 1992, the Indo-Israeli ties have witnessed a tremendous growth. Most of this has largely been fuelled and dominated by India’s requirements for state-of-the-art military technology and hardware from Israel ...  Riding on this confluence of interests, both countries have managed to put aside the uneasy past, and develop a new level of trust and operational understanding ...

India and Israel both represent ancient civilizations and share a British colonial past. They were the first states to become independent (in 1947 and 1948, respectively) in the post–World War II wave of decolonization. Both were born out of messy partitions and have maintained democratic regimes ever since under adverse conditions. But despite the two states’ similarities, it took more than four decades for them to establish a warm relationship including full diplomatic relations, flourishing bilateral trade, and strategic cooperation. The strategic aspect of this relationship—a post–Cold War phenomenon—is the focus of this article. The rapprochement between India and Israel is an important component of a new strategic landscape in the greater Middle East that includes Central Asia and parts of the Indian Ocean littoral …

The establishment of full diplomatic relations with Israel in January 1992 marked a new beginning in India’s Middle East policy. This was its most dramatic foreign policy move following the end of the Cold War … How did India square the past and pursue a more fruitful approach towards Israel? A modest attempt is made here to delineate some of the salient features of Indo-Israeli relations and the manner in which India handled its potential pitfalls.

There has been a steady strengthening of India’s relationship with Israel ever since India established full diplomatic relations with Israel in 1992, despite Indian attempts to keep this flourishing bilateral relationship out of public view. A flourishing Indo-Israeli relationship has the potential to make a significant impact on global politics by altering the balance of power, not only in South Asia and the Middle East, but also in the larger Asian region, which has been in a state of flux in recent times. However, notwithstanding the convergence of interests on a range of issues between India and Israel, this bilateral relationship will have to be carefully managed because of a host of constraints which circumscribe this relationship. This study examines those factors which are bringing the two nations increasingly closer and the constraints that might make it difficult for this relationship to achieve its full potential.

Much has been written about the Sino-Israeli relationship, mainly regarding political and economic ties. However, the security dimension of the relationship has received comparatively less attention. This article discusses Sino-Israeli security relations in an effort to shed light on their roots, substance and prospects despite Israel’s commitment to its relations with the United States.

... On January 11, 2007 Ehud Olmert ended his three-day official visit to China. His visit indicated that Beijing may now be willing to forgive (though probably not to forget) and turn to a new page in Sino-Israeli relations following over six years of a relative chill ...

Washington’s successful pressure on Israel to cancel the sale of the Phalcon early-warning plane to the People's Republic of China (PRC) has yet again highlighted the issue of Israel’s arms transfers to China and, indirectly, of Chinese arms transfers to the Middle East … The purpose of this article is to offer a rational, realistic, balanced and sober analysis of arms transfers in Sino-Middle Eastern relations …

Diplomatic Relations between the People's Republic of China and Israel were established as late as January 1992 ... Based on an already existing infrastructure, their quick progress is an outcome of an unofficial relationship that has been have been painstakingly promoted long before ...

Yegar, Moshe. The Long Journey to Asia: A Chapter in the Diplomatic History of Israel. Haifa: Haifa University Press, 2004.