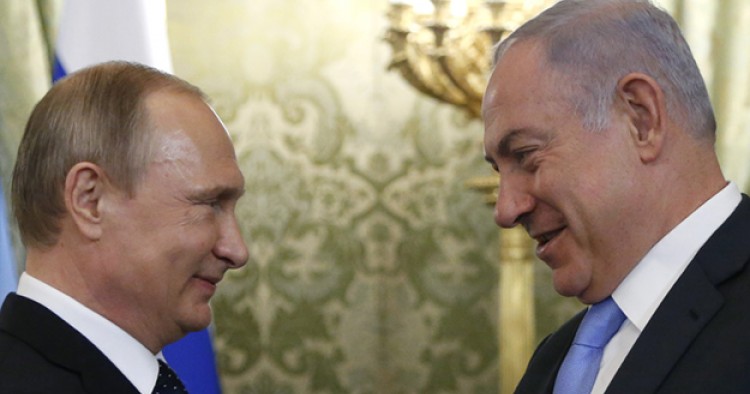 Israeli-Russian relations have attracted unusual levels of interest in recent months, against the backdrop of Russia’s military intervention in Syria and the unprecedented creation of a ‘de-confliction’ mechanism between the I.D.F. and the Russian forces. As is so often the case in today’s hyper-connected media and political environment, this small nucleus of reality was blown out of proportion and portrayed as nothing short of a strategic love affair. In fact, Russian President Vladimir Putin and Israeli Prime Minister Benjamin Netanyahu are walking a tight rope of joint and conflicting interests in Syria, in the region and vis-a-vis the United States and the European Union.

In Syria, Russia’s close alliance with Iran and Hezbollah positions it, seemingly, at the opposite corner from Israel. While some Russia-apologists are quick to point out the differences between Russia and Iran’s interests in this arena, their primary goals in Syria are completely aligned. Both nations seek to maintain and enhance their respective influence in Syria and Lebanon, while denying the United States and its allies a sustainable foothold in post-conflict Syria. From Israel’s perspective, Iran’s current role in Syria is already a major cause of concern, but a certain Russian role is perceived as beneficial. Russia is believed to have more influence on the regional spoilers—Iran, Hezbollah and other non-state actors—than the United States and any other external actor. Some in Israel see Russia as a moderating factor in that sense.

From an operational perspective, Russia’s military presence is also a complicating factor for Israel, given its intelligence-gathering capabilities and its disregard for conventional rules of engagement, already demonstrated by Turkey shooting down a Russian fighter jet in November 2015, as well as by infringements of Israeli airspace. Furthermore, it is quite clear that once the fighting in Syria subsides and Hezbollah is able to re-focus its attention on Lebanon, tensions with Israel will rise. The kind of relations and ‘quid pro quo’ that is taking place between Russia and Hezbollah in the course of the last five years will have a significant impact on Russia’s position toward future clashes between Israel and the Lebanese Shiite militant group. Armed with some of the best Russian-made missiles, rockets and intelligence capabilities, Hezbollah is considered by the I.D.F. as Israel’s primary enemy. Exactly 10 years after the Second Lebanon War, a third Lebanon war is frequently discussed in Israel as a fait accompli. The one external power who may actually be able to prevent such a war is Russia. Will it have an interest to do so?

Looking more broadly at Israel and Russia’s interests in the region and beyond, it appears that the age-old Hebrew saying “kabdehu vechashdehu,” or “respect him and suspect him,” has always been at the foundation of Israel’s attitude toward Russia, and will continue to guide it. It resembles President Barack Obama’s paraphrase of Ronald Reagan’s famous saying, “don’t trust, and verify.” The critical difference, of course, emanates from the vast asymmetries between the regional power, Israel, and the global power, Russia. Israel’s capacity to distrust is unlimited, but its ability to ‘verify’ is very much limited. The recent Putin-Netanyahu photo ops, celebrated by the Israeli press and enhanced by strategic messaging from the Kremlin and Netanyahu’s inner circle, are therefore largely a façade.

Russia seeks to weaken the U.S. hold on the Middle East as part of its global strategy to that effect. Israel’s defense and foreign policy establishment—despite the significant erosion of the Netanyahu era, who has recklessly damaged the fabric of bilateral strategic relations—still considers the United States its primary ally and protector. Russia has developed a flexible diplomacy and branded itself ‘the only actor capable of engaging with all other actors.’ In post-elections America, when it becomes clear that the next administration’s Middle East posture will not be significantly altered, Russia might be faced with the limits of its own power and influence. It will not be able to take the traditional American leadership role, nor will it seek to do so. Come the next major Israel-related crisis, be it in Gaza, the West Bank, in Syria-Lebanon or directly involving Iran, Russia and Israel will be faced with serious dilemmas. The previous modus operandi of U.S. involvement might be less relevant—in fact the U.S. role has already been quite marginal in Israel’s recent clashes with Hamas in Gaza—but there is no track record of Russian active diplomacy in such conflicts in recent decades.

The two fundamental Russian policy instruments in the Middle East—exporting arms and fossil fuels—are also squarely at odds with Israel’s interests. Both historically and more recently, Russian-made weapon systems and munitions have formed the bulk of Israel’s enemy’s arsenals. Furthermore, Israel’s ability to influence Russian arms sales to the region is extremely limited, as demonstrated by recent major deals signed between Russia and Iran.

On the energy front, Gazprom’s attempts over the years to enter the Eastern Mediterranean basin have been thwarted, presumably at least partly by Israel. The recent signing of the Israel-Turkey agreement, allegedly incentivized by a mega-project of natural gas export from Israel to Turkey and Europe, which would reduce Turkish and European dependency on Russian products, is yet another manifestation of orthogonal Israeli-Russian interests.

On the global scene, Israel has been extremely careful regarding Russia’s core interests and various disruptive strategies. Israel’s U.N. ambassador was instructed to vacate the scene of the vote to condemn Russia’s invasion of Crimea in mid-2014, enraging the U.S. administration. Russia’s global cyber-attacks, as well as its harboring of Edward Snowden, haven’t prompted any Israeli official reaction. Putin’s brutal domestic policies have also gone unnoticed as far as Israel’s government is concerned. Russia’s record in terms of Israel-related votes at the United Nations Security Council and General Assembly have been consistently negative, but was treated by successive Israeli governments as a ‘force of nature.’

Another unique feature of Israeli-Russian relations is embodied by the more than 1 million Israeli-Russians—out of Israel’s total population of 8 million—mostly immigrants from the former Soviet Union in the early 1990s. In every meeting with his Israeli counterparts over the years, Putin would, according to Israeli diplomats present in the meetings, mention the fact that Russia had more than one million subjects in Israel, and that he would not do anything to harm them, adding “do you think I would ever do anything to harm them?” Over the years, allegations of domestic political subversion under Putin’s guidance have been made in the Israeli press, often mentioning Avigdor Lieberman’s name. Similar allegations—of cultivating political right-wing proxies—are often made in Europe, including by politicians, and in recent days, that allegation has stretched to the United States in regards to Putin’s alleged support for Donald Trump. Adding a partisan element to the complex web of Israeli-Russian interests, and providing a local political power base for Putin and right-wing Israeli politicians, helps shape Israel’s overall ‘respectful’ approach to Russia.

The future trajectory of the relations looks familiar. Both sides will have an ongoing interest to keep up the appearance of friendly and mutually beneficial engagement. However, since the Middle East will continue to provide multiple crises, Russia and Israel will undoubtedly find themselves on opposite sides. Their ability to ‘contain and maintain’ these conflicting interests will be constantly tested. Tense U.S.-Russia and E.U.-Russia relations will further exacerbate pressures and policy dilemmas for Israel, forcing it to continuously adjust and recalibrate its relations with the ever-challenging Putin regime.