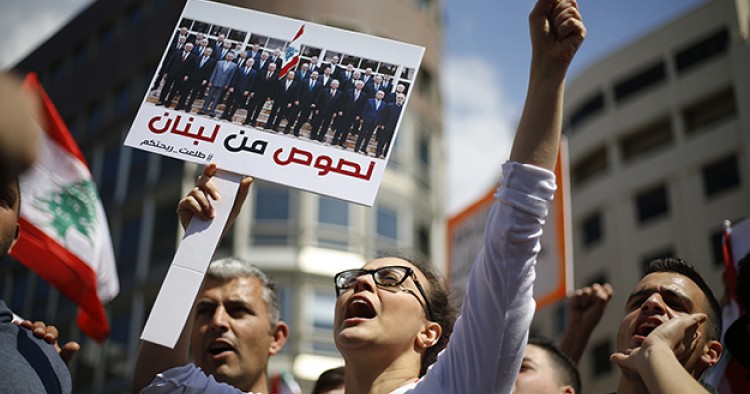 Lebanese protesters were out on the streets again over the weekend, this time against a new national budget that includes a number of tax hikes. The government claims the tax hikes are necessary to fund an overdue pay raise for public sector employees. In a country steeped in overt corruption—Lebanon ranks 136 of 176 states in Transparency International’s Corruption Perception Index—that message was always going to be a tough sell.

Thus, when Prime Minister Saad Hariri went to speak with protesters in Beirut on Sunday, he was met with water bottles and chants of “thief.” Critics of the government, and a view shared widely, accuse Lebanon’s political elite of being self-serving with little interest in public welfare, and going to any stretch to protect their wealth and power. Protesters see the tax increases not as an appropriate means to raise government revenue, but rather an attempt by political leaders to avoid the necessary anti-corruption reforms that could raise the revenue needed to fund state initiatives, such as a salary increase for public sector employees.

For example, a January report by local Lebanese network, MTV, found that a company owned by former Prime Minister Fouad Siniora, a close associate of the current prime minister, has a favorable contract to manage Beirut airport’s Duty Free, which resulted in reduced revenue for the government, and higher profits for Siniora’s company. Lebanese media has frequently been on the heels of corruption at the top level, with no political faction escaping the spotlight. In 2015, Executive Magazine was sued by Gebran Bassil, Lebanon’s current foreign minister and then-energy and water minister, after it questioned the whereabouts of $33 million made through a sale of seismic surveys along Lebanon’s coast. Corruption charges have also been adopted as a political weapon to discredit opponents. Current President Michel Aoun, and father-in-law to Bassil, did just that in 2012 when he accused the finance ministry, then under the control of a political rival, of losing $5 billion in donations.

Corruption has been a hot topic in Lebanon for years. Indeed, Aoun’s Free Patriotic Movement (F.P.M.) had long ran a vocal anti-corruption, pro-reform platform, often seeking to expose the corruption in political rivals to improve his party’s standings among the electorate. It is quite a turnaround, then, that the F.P.M. would, along with Hariri’s Future Movement and Nabih Berri’s Amal Movement, push for tax increases instead of closing corruption loopholes in order to raise revenue.

The current political friction doesn’t end with the budget. Lebanon is due to hold parliamentary elections in May, its first since 2009; the parliament voted to extend its mandate in 2013 claiming that was necessary to insulate the country from the destabilizing effects of the war in neighboring Syria. The elections are likely to be postponed again as rival political factions have yet to agree on an electoral law, and missed the March 21 deadline to set a date for elections in May. President Aoun has insisted that the current electoral law—the majoritarian, winner-take-all 1960 electoral law—is antiquated and needs reform.

The electoral law has also been a major topic over the years, with subsequent governments in the past decade each advocating and attempting to reform the electoral law. Calls have been made to change the current majoritarian law to proportional representation, but sticking points remain. The major obstacles are the opposition of Hariri’s Future Movement to the change as well as the opposition of Druze leader Walid Jumblatt. Hezbollah and secular civic activists are in favor of shifting to proportional representation, but attempts at reaching a compromise that appeases all have thus far only resulted in deadlock.

Over the past few years, the loss of faith in the political elites to deliver on governance is resulting in a significant development in Lebanon’s political landscape: the emergence of a grassroots, secular, pro-democracy civil movement. It is this movement that was largely the catalyst behind Sunday’s protest. Among the organizers of the protest included Beirut Madinati, an independent, secular political movement that gallantly lost last year’s Beirut municipality elections, and the YouStink movement, which came to fame during the garbage crisis of 2015.

This loosely connected movement of secular, civic activists has been born out of years of frustration with the ruling elite’s corruption, nepotism, and seeming indifference to the public interest. The movement gathers a wide range of civil society actors supporting a raft of issues from civil liberties to combating economic and political corruption. And the movement has made some headway. Long brushed aside as liberal elitists hailing from Beirut’s affluent neighborhoods, the weekend’s protests saw a mix of sect and class, showing that the movement’s messages are reaching those outside of its traditional areas of support.

Such widening support perhaps stems from the shared sense of frustration and desperation that transcends political, sectarian, and regional lines. No governing coalition, neither the pro-Saudi March 14 nor the pro-Iranian March 8, have been able to deliver on basic services. Neither coalition has curbed corruption, not within their own ranks nor within the state’s bureaucracies. Economic performance has continued to slide as the burden on ordinary Lebanese has elevated, irrespective of which party controls which ministry. Public debt remains an astronomical 139 percent of G.D.P., current account deficits have widened, poverty is rising, and economic growth has been sluggish at best.

Conditions have been brewing for some time for an alternative in Lebanese politics. That the prime minister felt compelled to address protesters, and subsequently stood back from issuing further tax increases, suggests the movement’s anti-government echoes are beginning to be heard in the corridors of power. The next step is transforming street action into political action.

Beirut Madinati’s contestation of the Beirut municipal elections was the first significant crossover from protest to political action. There is a growing portion of the Lebanese population that is secular, liberal, pro-democratic, pro-human rights, and anti-corruption, and it needs to find a way to be represented within Lebanon’s overwhelmingly sectarian and oligarchic political system.

The electoral law reform debate is crucial to this nascent movement. A shift to proportional representation would dramatically increase the chances of independent democratic groups, such as Beirut Madinati, of entering parliament and forming a progressive, liberal, secular, democratic bloc. Secular, civic activists thus need to decide whether it is worth focusing on the timing of elections, which would be based on an old law designed to keep them out, or pouring its energy into reforming the electoral law to finally award them the power to bring about real change in the country.