Locating Oman in India’s Strategic Engagements with the Gulf 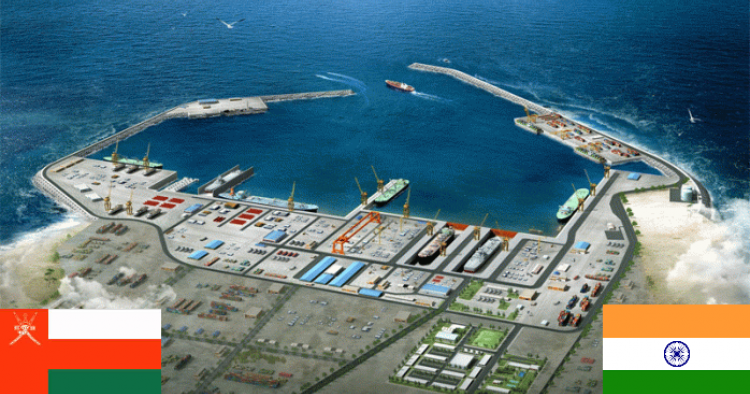 India’s interests and capabilities extend well beyond the sub-continent. This essay is part of a series that explores the geopolitical dimensions, economic ties, transnational networks, and other aspects of India's links with the Middle East (West Asia) — a region that plays a vital role in India's economy and future. More ...

It was not long ago that Oman was considered to be the closest of India’s Gulf Cooperation Council (GCC) partners. The India-Oman relationship then seems to have drifted due to neglect by New Delhi and uncertainty about Sultan Qaboos’ health and the suspense about succession. Nevertheless, Oman did not give up on its diplomatic outreach to India. In June 2014, Omani Foreign Minister Yusuf bin Alawi was the first foreign dignitary to visit New Delhi to greet newly elected Prime Minister Narendra Modi. He again visited New Delhi in April 2017.[1] The latter visit appears to have galvanized Modi’s February 2018 trip to Oman, which revitalized the bilateral relationship.

India and the Gulf

India’s strategic engagements with the Gulf have witnessed a significant increase under the Bharatiya Janata Party (BJP)-led government in New Delhi. Prime Minister Modi has taken a keen interest in foreign policy.[2] He has invested significant diplomatic effort in the Middle East, reaching out to all of the regional powers; and has managed to maintain friendly relations with those countries that are at odds with each other, such as Israel and Iran. Since Prime Minister Modi’s first trip to the Gulf in August 2015, the frequency of high-level visits to and from the region has increased significantly.[3]

While trade, commerce, investments, energy security and expatriates have traditionally been the focus of Indian engagements with the Gulf, the recent series of political visits have added the new dimension of security cooperation. India and the Gulf countries have come to regard terrorism and Islamist radicalism as major threats. Accordingly, they have undertaken joint counterterrorism and counter-radicalization efforts.[4]  Security cooperation with the UAE has extended to joint defense production; and cooperation in space technology too has been discussed.[5]

India-Oman relations encompass a wide spectrum of activities in trade, energy and investment. However, it is bilateral defense cooperation and Oman’s role in regional affairs that make Oman important for India.

Oman was the first GCC country with which India established a robust defense and security cooperation mechanism.[6] In recent years, New Delhi and Muscat have cooperated in ensuring maritime security in the Indian Ocean region and the Royal Navy of Oman partners with Indian Navy’s anti-piracy mission and Indian Naval Ships (INS) are regularly welcomed by Oman for overseas deployments. Additionally, Oman has provided berthing facilities for Indian warships patrolling the Indian Ocean and Arabian Sea for anti-piracy activities.[7]

Indeed, maritime security cooperation is the most important aspect of India-Oman defense and security relations.[8] During the Modi visit, the two sides signed an annex to the existing MoU on military cooperation. Accordingly, Indian warships will have access to the strategically located Duqm port. Heretofore, Indian naval ships will be able to use the port and dry dock for maintenance of its military vessels.

The Indian Navy’s access to Oman’s Duqm Port is significant for two reasons. Firstly, this will allow India to enhance its naval activity in the Indian Ocean. The growing threats to India’s maritime security, especially on its western coast, is a major concern. Bearing in mind this consideration, and to secure its Sea Lanes of Communication (SLCs), India has invested in several locations in the Indian Ocean, including the development of Assumption Island in Seychelles and Agalega in Mauritius. As the Duqm port is located on the southeastern coastline of Oman, overlooking the Arabian Sea and the Indian Ocean, access to the port will be a strategic asset for the Indian Navy, especially given its proximity to the Chabahar Port, which India has jointly developed with Iran. Secondly, this will allow India to counter the growing Chinese naval activity in the Indian Ocean Region (IOR).

Indian defense cooperation with Oman extends beyond maritime cooperation. Omani cadets and officers have for long been trained in the National Defense Academy and other military training schools in India. Oman is also the only country in the Gulf with which all three services of the Indian military — the army, air force and navy — conduct joint exercises. In January 2017, the two air forces conducted a five-day joint exercise Eastern Bridge in Jamnagar, Gujarat.[9] Later in March, the two armies conducted the second edition of the joint exercise Al-Najah in Bakloh, Himachal Pradesh.[10] In December, the two navies conducted the 11th edition of joint naval exercise Naseem Al Bahr in Muscat, Oman with INS Trikand and Teg participating from Indian side.[11] This is on top of the regular exchanges of visits between defense ministers and defense officials. In May 2016, then-Defense Minister Manohar Parrikar visited Muscat to discuss security and defense ties and signed four MoUs related to defense cooperation.

The robust defense and security cooperation between India and Oman was underlined in the joint statement issued during the visit of Prime Minister Modi. It “noted that the MOU on Military Cooperation…has provided the general framework to strengthen bilateral defense ties.” Further, the two sides “expressed satisfaction at the signing of an annexure to the existing MOU.” They agreed to “provide further impetus to the robust defense relations, including through regular holding of joint exercises by the three defense forces.” Oman and India also expressed “satisfaction at the progress achieved in the ninth round of bilateral Joint Military Cooperation Committee talks.”[12]

Oman is an important regional player, though it lacks the financial heft of Saudi Arabia, UAE or Qatar, and the demographic and military advantages of Iran. Despite being part of the GCC it has for long maintained an independent foreign policy and has been able to successfully project itself as a mediator in regional disputes.[13] Muscat was instrumental in facilitating negotiations between the US and Iran during the Obama administration which eventually led to the signing of the Joint Comprehensive Plan of Action (JCPOA) between Iran and the P5+1 (the US, the UK, China, Russia and France plus Germany).[14] Oman’s ability to mediate disputes among the Arab Gulf countries had come to the fore during the diplomatic row between Qatar and others in 2014 and its absence in 2017 had said to have complicated the matters. In the past, Muscat has played the mediator between Iran and the Arab Gulf countries as it maintains relations with Iran and has kept the diplomatic channels open.[15]

For these reasons, New Delhi attaches even more importance to Oman. Though the illness of Sultan Qaboos and the inevitable power transition will seriously test Oman’s ability to maintain its independent foreign policy and play mediating role in regional affairs, it cannot afford to lose its strategic advantage. With the region in turmoil, serious ruptures within the GCC and rising tensions between Iran and Saudi Arabia, India’s strategic interests will come under serious threat if the situation escalates further.

India has vital stakes in the security and stability of the Gulf region. The safety and security of over 8 million Indian expatriates is a top priority, all the more so given the roughly US$30 billion they remit annually. Furthermore, India is heavily dependent on oil and gas imports from the Gulf. India must also contend with a number of threats and challenges that emanate from the region, ranging from Islamic extremism and growing sectarian tensions to interstate regional rivalries and hostilities.

India and Oman have traditionally enjoyed cordial relations. Over the years, the India-Oman relationship has acquired a multi-dimensional character. In recent years, and under the Modi administration in particular, the security and defense components of the relationship have broadened and deepened. Oman was the first Gulf country with which the Indian military initiated joint exercises. India and Oman have developed a strong defense and security partnership with a special focus on maritime security. Indian policymakers regard Oman as being a vital ally and security partner in the Gulf region, as well as a valuable, constructive player in regional diplomacy.

[3] Between Modi’s visit to the UAE in August 2015 and the four-nation tour of Jordan, Palestine, UAE and Oman in February 2018, he has visited the region thrice in 2016; Saudi Arabia in April, Iran in May and Qatar in June. Additionally, New Delhi has hosted the Crown Prince of Abu Dhabi Muhammad bin Zayed al-Nahyan in February 2016 and January 2017, the Emir of Qatar Tamim bin Hamad al-Khalifa in March 2015 and President Hassan Rouhani of Iran in February 2018.

[6] India and Oman signed a Memorandum of Understanding (MoU) on Military Cooperation in 2005, which was renewed in 2016. Ministry of External Affairs, Government of India, “India-Oman Relations,” November 2017, accessed May 23, 2018, http://www.mea.gov.in/Portal/ForeignRelation/26_Oman_November_2017.pdf.

[8] In May 2016, the two sides signed MoUs for cooperation in the areas of maritime security and coastal security with focus on joint training and regular interactions among officials. Press Information Bureau, Government of India, Ministry of Defense, “Defense Minister Manohar Parrikar Visits Oman,” May 22, 2016, accessed May 23, 2018, http://pib.nic.in/newsite/PrintRelease.aspx?relid=145533.

[12] Ministry of External Affairs, Government of India, “India Oman Joint Statement during the Visit of Prime Minister to Oman,” February 12, 2018, accessed May 23, 2018, http://www.mea.gov.in/bilateral-documents.htm?dtl/29479/India+Oman+Joint+Statement+during+visit+of+Prime+Minister+to+Oman..