The Lost Land of Egypt 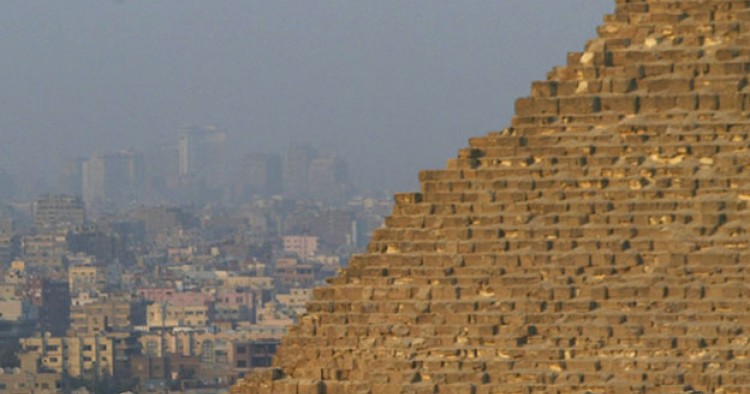 Egyptians call their desert country “the protected” (al-mahrousa) in homage to its longevity and the idiosyncratic features that have consistently saved it from destitution: a geostrategic location, Nile-fed farmland, and a stunning array of in situ antiquities. While much has remained unchanged in Egypt since the 2011 uprising, including the authoritarian nature of its government, alarming quantities of the country’s precious agricultural and archeological land have been vanishing to make way for cheaply-built homes of low-income citizens. This trend is due to a lack of proper policing since 2011 and the chronic absence of viable housing policies.

In the last 30 years, Cairo’s “informal quarters,” sprawling settlements of unlicensed brick and steel-reinforced concrete dwellings, have grown by orders of magnitude. In the 1980s, the roads from central Cairo west to the Pyramids were flanked by fields. Now the city crowds so close to its icons it nearly overwhelms them. Two-thirds of Greater Cairo’s population (around 20 million) lives in informal housing, which absorbs 75 percent of all new population growth.[1]

The places most Cairenes call home are uniformly grim, impenetrable blocks of featureless brick walls. Wide streets are rare, and narrow dirt paths run along the buildings so that moving from place to place requires zigzagging like a rat in a maze.  The supply of electricity and water, often pirated from the municipal grid, is erratic; the acrid stench of burning garbage saturates the air.  Yet informal building answers a burgeoning population’s need for affordable shelter. The demand is too great for the state to supply housing, and private investors have focused almost exclusively on upscale real estate development.

The growth of brick “shantytowns” throughout Egypt is owed to a dearth of urban planning and enforceable building codes, policies favoring big developers, and costly, tangled procedures for land acquisition and building that are rife with opportunities for corruption. The informal sprawl enveloping Egypt’s larger cities is also testimony to the impoverishment of rural provinces, where agricultural incomes have dropped below sustenance levels in recent years. Small landowners either sold or partitioned their fields and built on them as cheaply as possible, creating small, poorly ventilated flats rented for around USD$100 per month, equal to many average salaries.

Uncontrolled building in a country with just 5.5 percent inhabitable cultivatable land has grave implications for food security. A 2011 UN report claimed that Egypt, already the world’s largest wheat importer, is losing farmland to urban development faster than any other country, at a rate of around 12,600 hectares annually.[2]  The loss has accelerated post-uprising, with the Ministry of Agriculture reporting some 700,000 instances of illegal building since January 2011.[3]

In Egypt, land is power. The military is the largest landowner, and the Mubarak regime’s undoing was partly owed to sweetheart deals for choice locations, particularly on Egypt’s coasts. Large tracts of land that might have been developed as new towns or institutions serving the public instead enriched a handful of real estate investors interested primarily in upscale tourism or residential compounds. The Egyptian Centre for Housing Rights (ESCR), an NGO, reports that a minority elite, around 250,000 families, typically owns several residences including a seaside villa or two, while 18 percent of Egypt’s lesser privileged families share a single room.[4]

Housing is a problematic issue for any government, but for one boasting a commitment to social justice, failure to address it becomes a volatile hypocrisy. Although Egypt’s Islamist government did not create these problems, it offered no solutions and failed to take actions to slow illegal construction.  This laissez-faire attitude encouraged lawlessness and progressively bolder encroachments. With the current interim government that replaced ousted Mohamed Morsi busy organizing a new constitution and parliamentary and presidential elections, Egypt’s housing issue, however urgent, is not a priority and unlicensed development is bound to continue unchecked.

Engrained social mores have held Cairo together since January 2011. Indeed, one wonders what New York would look like after three years without a functioning police force. But many citizens cannot resist exploiting the situation to take what they feel they deserve.  Since 2011, unprotected archaeological and historic sites nationwide have been looted and surrounding land subsumed by residential and commercial buildings.

In June 2012, residents of Fustat, the site of Cairo’s founding mosque (built by Amr ibn al-`As in 641 AD), reported that an armed gang had bulldozed a large tract of land adjacent to the mosque, including remnants of historic buildings, to make way for building projects. The work lasted a month, but repeated complaints to the authorities were ignored.[5]  Such inaction endangers UNESCO’s plans to restore the neighborhood and build a heritage museum there.

Residents likewise alerted the press to encroachments near the Dashour Pyramid, on Cairo’s outskirts, where a cluster of buildings suddenly appeared and a portion of the archeological site was being turned into a cemetery. Aside from endangering big-draw tourist attractions, Egyptologist Salima Ikram estimates that “more than 35 percent of unexplored antiquities sites will be irrevocably lost” if illegal building continues unchecked.[6]

Alongside encroachments, Egypt’s uprising has sparked a predictable surge in looting; archeological sites on the fringe of Egypt’s desert are riddled with pits dug by treasure hunters. On a recent visit to Abu Sir, the ruins of another early pyramid near Dashour, Ikram and her colleague Monica Hanna found “a pock-marked lunar landscape with dense scatters of mummy wrappings pulled off bodies [to search for valuable amulets] and…limbs and heads of people who were buried here more than 2000 years ago.”

Egyptians have always mined their past to feed their present; tombs and temples stocked with riches were persistently plundered throughout antiquity’s hard times. Rampant looting characterized Egypt’s Second Intermediate Period, the centuries of turmoil that followed the fall of the Middle Kingdom (2166 BCE). A thousand years later, pillaging signaled the demise of the affluent, corrupt New Kingdom and the onset of a Third Intermediate Period. Egypt’s current “transitional period” is little different, marked by uncertainty, lawlessness, a lack of security and competent leadership, and the perennial dream of buried gold.

Amateur treasure hunts appear to have been on the rise since 2008, owing to deteriorating economic and social conditions under the moribund Mubarak regime. Denied jobs and options, people living in informal quarters near archeological sites were tunneling for artifacts beneath their homes. In several cases the undermined buildings collapsed, burying the diggers alive.[7]  The threat of death or arrest cannot outweigh the cumulative effect of generations of treasure-finding narratives in Egypt, where people can scarcely be blamed for having more faith in the ground than in the government.

In the words of a resident of Abu Sir, “Why shouldn’t we steal? The government has been stealing from us for ages,” a sentiment that echoes throughout Egypt’s history.[8] As the ancient author of The Tale of the Eloquent Peasant observed, “Theft is natural for him who has nothing.”  The problem is that at this rate there will soon be nothing left to steal. Egypt deserves to be called “the protected;” its unique material legacy has served its people well. The question is whether or not this dangerously mismanaged country can survive long enough for them to return the favor.

[1] David Sims, Understanding Cairo: The Logic of a City Out of Control (Cairo: American University in Cairo Press, 2012), 279.

[7] The author investigated several instances of tunnel-related housing collapse from 2008-2011, including one in 2009, at a house beside the Pyramid of Cheops that took six lives.