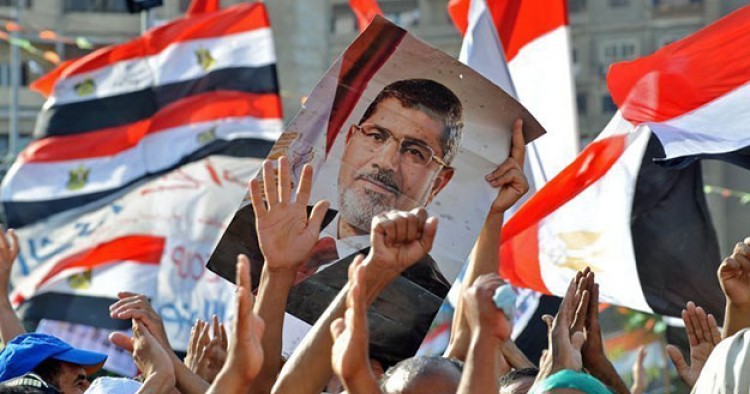 Three months after the ousting of President Mohamed Morsi, Egypt’s Muslim Brotherhood remains in shock. In two and a half years, the group went full circle, from an outlawed organization to one that won a plurality in parliamentary elections and saw its candidate win the presidential election, to that president’s ouster a year later and the subsequent court verdict ordering the group’s shutdown. During this short journey, the Brotherhood shifted alliances. At times it paired with civil forces against Islamist “extremists,” and at others it allied with the military and state actors against revolutionaries—and vice versa. It paid a heavy price for this alternation of alliances, as it led to a drop in public support. The Brotherhood is now paying an even higher price for its ongoing alliance with other Islamists, including previously violent groups such as al-Gamaa al-Islamiyya, as it has led to mounting accusations of the group resorting to violence and opting for chaos. While the emergence of terrorism looks inevitable, and the decision of some Brotherhood members to carry arms is likely, the Muslim Brotherhood as an organization is more likely to remain committed to its foundational principle of nonviolent engagement.[1]

Four ideological leanings have come to co-exist within the Brotherhood over its 85 years of existence. The traditional school, championed by Azhar’s long history of scholarship upon which the group was initially founded, as well as the modernist school of early twentieth-century Azhar scholars like Muhammad Abduh, have been on the decline since the 1960s. They have been partially replaced by Qutbism and Salafism.[2] Other variations in the organization, particularly members’ socioeconomic interests, have been causing tension and are on the rise. Businessmen have been ascending to the leadership level, replacing middle class professionals, and massive ruralization has been occurring at the grassroots level, with recruitment relying heavily on lower middle class and working class actors from rural areas.

Yet despite these differences, and with only a few waves of resignations over the years, the Brotherhood managed to maintain organizational unity. This was particularly due to principles that fostered accord, such as the belief that Islam is an all-encompassing system; the rejection of violence as a means for domestic political change; the acceptance of democracy as a political system; and the support of resistance movements operating against foreign occupation. These principles, most importantly the commitment to nonviolent politics, are integral to the organization, and discarding them is highly unlikely.

The Brotherhood also developed a dual strategy to sustain the organization. First, it responded to years of threats and actual persecution by institutionalizing a “state of emergency” that continued, though to a lesser extent, during its year in power. It then resumed with Morsi’s ouster. This state of emergency allowed the group's leadership to postpone intellectual and policy questions and to tolerate intellectual and methodological inconsistencies, which facilitated the otherwise impossible task of negating ideological differences. For instance, instead of developing a clear definition of Sharia that would act as a benchmark for policy and behavior, leaders called upon the Islamic notion of necessity (darura). Darura, in the traditional, narrow definition, allows a Muslim to do that which is forbidden if it interferes with practical life, thus legitimizing acts that would otherwise be religiously illegitimate. The Brothers used darura to justify a wide range of actions, such as dealing with loans with interest, and they made avoiding anything harmful to the organization part of darura. Hence the organization became an absolute.

The strategy’s second component was organizational. Over the years, the Brotherhood developed a “pyramid-shaped hierarchy [that] ensure[d] that members dutifully execute[d] the aims of its national leadership at the local level.”[3] Through centralizing decision-making and decentralizing implementation, the Brotherhood sought to maintain internal unity and efficiency. Unity was fostered by narrowing the decision-making circles (until former Chairman Mahdi Akef stepped down in January 2010, these circles were comprised primarily of the group's “historical” leadership, that is, those who had personally known its founder, Hassan al-Banna), thus reducing room for disputes and disagreement. The Brotherhood was able to sustain this system by substituting members' need for empowerment with a strong sense of duty. The organization’s beleaguered state helped to foster high levels of loyalty and trust that were based on a history of sacrifice, resilience, and strong fraternity among members. Implementation of activities such as managing campaigns and social services was ensured through decentralization as a means to overcome inefficiencies caused by the recurrent arrest of members at different levels.

This mode of action and organization allowed for the Brotherhood’s leadership to mobilize members to support President Morsi’s decisions even before they were announced,[4] and it allowed for the 50-day sit-in in Rabaa al-Adaweya Square protesting Morsi’s ouster. The storming of the sit-in and the massive arrests that followed, however, have had a significant impact on organizational management. The sudden absence of leadership, alongside mounting fury of members in the streets, meant that decisions and (re)actions were made while the usual decision makers were absent. Decisions, therefore, were made at a very local (and sometimes individual) level, and were mere reactions that were at best weakly tied to the organization’s overall strategic orientation. In the final analysis, therefore, one can argue that the organization is temporarily on hold and that members are reacting, in their own capacity, to the death of their loved ones in three consecutive massacres. It is thus to be expected, particularly with the group’s current alliances, that some of its members will resort to violence. What remains inconceivable, nonetheless, is an endorsement or encouragement of this violence on an organizational level.

The current crisis is unprecedented in the Brotherhood’s history. Not even comparable to the oppression of the 1950s and 1960s, the swift move from prison to palace and back will have a tremendous impact on the organization. Most significantly, it is expected to lead to several resignations, dismissals, and splits. Instead of threatening organizational unity, however, these departures will lead to the reemergence of an organization skeptical and critical of the surrounding society, with significantly high levels of discipline, an internal organizational focus at the cost of political and social engagement, and minimal—if any—tolerance of internal critical voices. In other words, the organization, currently on hold, will reorganize itself along Qutbi lines, and other ideological tendencies will be suppressed, marginalized, or completely eliminated. In fact, the reemergence of a context of oppression provides the perfect environment for organizational unity. Also, if the organization remains peaceful, it enables the leadership to escape due questioning and responsibility for the failures of the past two years. And so even while upholding its principles of nonviolent engagement, the Brotherhood will become a more extreme organization. Some of its members, however, will depart the group and walk down four different paths.

First is the Sufi path, which will attract members either confronted by the foundational contradiction of Islamism (a claim to authenticity and the reality of a very modernist discourse and outlook), or those seeking spiritual salvation previously sought but not found via the Brotherhood. Another group, disappointed with the fruitlessness of the “Islamist solution” and arguing for Islamic legislation as a “practical solution” rather than a “divine mandate,” will turn toward secularism. In a revolutionary context, it is more likely that these defectors will develop progressive tendencies. A third group, also realizing—even partially—the inherent contradiction of Islamism, will adopt a project that relegates Islam to the realm of value systems, with hardly any legislative implications. The main question for this group will become about Islamic values rather than Sharia. Critical of the current leadership’s lack of competence, this new leadership will also exhibit a more sophisticated understanding of state and market dynamics while emphasizing “religious” values, mimicking what Jenny White has referred to as the “Muslimhood [as opposed to Islamist] Model” of Turkey’s AKP.

None of the previously mentioned splinters is likely to resort to violence, but the fourth will inevitably be violent. Frustrated with the Brotherhood’s inefficiencies and insufficiently sophisticated positions, provoked by the failure of Islamization through democratic means, and capitalizing on the Qutbi critical stance toward society, political violence will become a more viable alternative for these members. Micro-violence is already taking place in Brotherhood protests, with Molotov cocktails, rubber bullets, and stones routinely used and increasingly tolerated: actions that capitalize on the temporary absence of strong organizational discipline.

But as the organization recovers from the current crisis, it will adopt strong positions against violence. Some members, therefore, will be forced to leave the group once they publicly turn violent, while others will not inform their leaders of their intentions. Young Islamists forced out of the Brotherhood are more likely to not work through existing Islamist organizations. Critical of the inabilities of institutionalized groups and fighting a dual battle for Islam and of revenge for the loss of their loved ones, these activists will perform their “sacred mission” alone. This new wave of terrorism will capitalize on the technological boom that makes knowledge of explosives only a click away. Egypt’s regime has been successful in preempting such attacks so far, but the underground and individual nature of these activities undermines the possibility of dealing with them using security measures alone. In the current context of unconditional exclusion, this risk of violence will be on the rise.

[1] A group calling itself the “Brotherhood without Violence” that allegedly came from within the organization and  emerged after the coup criticized the “leadership’s endorsement of violence during the sit-ins;” instead, it sought a nonviolent solution to the political crisis. It remains hard to believe, however, that members of this group are former members of the Brotherhood.

[4] In December of 2012, masses of Muslim Brotherhood members marched to the prosecutor’s office to support the president’s awaited decisions that were, at the time, supposedly unknown. A few hours later, the president issued a controversial constitutional declaration that included, among other things, the dismissal of the prosecutor.