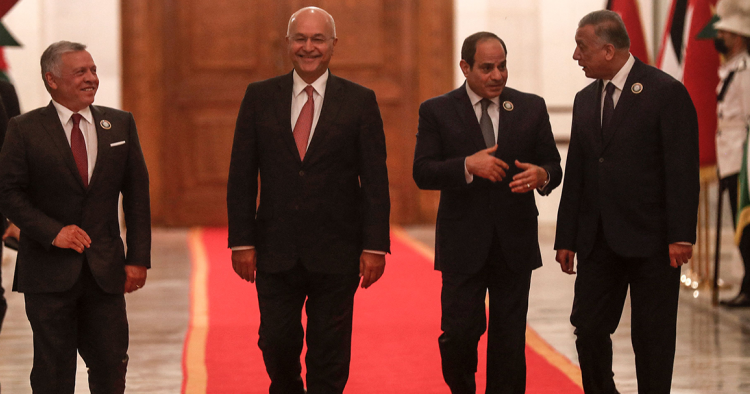 Sunday was a festive day in Baghdad. The last time Iraqis had received an Egyptian president 30 years ago, the region was gearing up for war and uncertainty as the late President Hosni Mubarak shuttled between Baghdad and Gulf capitals prior to Saddam Hussein’s invasion of Kuwait in 1990. The circumstances were quite different on June 27, when Egyptian President Abdel-Fattah el-Sisi and King Abdullah II of Jordan were given the red-carpet treatment at a tripartite summit marking the fourth meeting between the leaders of the three countries aiming to form a new regional alliance.

Politically, this is another experiment in forging new regional partnerships. Traditional centers of power like Cairo and Amman face the reality of losing agency on key regional issues to other players like Abu Dhabi and Riyadh, which have successfully turned their immense wealth and far-reaching international relationships into political and security influence.

Despite continuing to claim historical patronage over Jerusalem and peace mediation between the Israelis and Palestinians, the Trump administration largely sidelined Amman on the matter of the Abraham Accords, and its decision to move the U.S. embassy from Tel Aviv to Jerusalem was a slap in the face. Jordan is also feeling the economic cost of isolation by the Gulf states. Combined with a dire financial situation at home, this has resulted in growing public resentment and protests.

Long a self-proclaimed leader of the Arab World and a center of gravity between its Asian and African branches, Cairo has increasingly found itself in the backseat on various Arab issues of importance, like Syria, Libya, and Yemen. This has prompted it to pursue a more active role in mediation in Gaza to demonstrate its continued relevance, helping to broker and later reinforce the May cease-fire between Hamas and Israel. The new tripartite pact with Jordan and Iraq may help Egypt to at least revive the optics of its regional leadership role domestically.

Baghdad by contrast has been regarded as outside the Arab fold for far too long to make a similar claim, taking a position as an observer since the 2003 U.S.-led invasion, if not before. To the U.S. and other Arab nations, the tripartite grouping is a welcome attempt to balance or even counter Iranian influence in Iraq. Although initiatives aimed at enhancing regional economic integration, energy security, and counterterrorism are welcomed by Iraqis, the country’s complex political and socio-economic landscapes remain a huge barrier. Those close to Iran already see the new grouping as an American creation, even reducing it to an attempt to drag Iraq toward normalization with Israel.

The Iraqi people are wary of being on the losing end. They do not trust their politicians to make economically sound decisions in the face of regional political interests, and there are precedents for this. Iraq relies on Iran as its single gas and power supplier, provides Jordan a $16 per barrel discount on oil shipments, and is planning to donate fuel to Lebanon based on the exchange rate of 1,500 LBP/USD when the Lebanese pound has collapsed to almost 15,000 LBP/USD in the black market.

In theory, as part of the new alliance, Baghdad is expected to hedge its vast oil and gas resources in return for “investments” and “human resources” from Egypt and Jordan. At one point, investments by Jordan and Egypt were even sold as a replacement for Iraq’s $10 billion oil-for-infrastructure agreement with China.

But where would the money come from?

Politicians in Baghdad are star-struck by Egypt’s rapid infrastructure expansion, which aided in supporting GDP growth of 5% in 2018 and 2019, before the COVID pandemic struck. Largely fueled by debt, Cairo now owes the IMF $19 billion, the second-largest amount after Argentina. Egypt’s debt-to-GDP ratio is projected to rise to 93%. Even with high oil prices, Baghdad’s state budgeting is still rigid and weighed down by its large current expenditure, at 77%, meaning little money is left over for infrastructure spending. The World Bank also estimates that total government debt had reached almost 71% of GDP in 2020.

Jordan just borrowed $1.45 billion from the World Bank in June to “stimulate inclusive growth and create more jobs.” This is on top of another $1.3 billion approved a year before by the IMF, which forecasts that unemployment is “rising to a record high of 24.7%.” Taking social security holdings into account, the World Bank estimates Amman’s debt reached 106% of GDP last year. None of the three countries is in a position to borrow more without risking further economic pain.

That leaves a major question mark over how the projects planned by the governments of this alliance can be financed. Stuck on the drawing board for at least a decade, the oil pipeline to run from Basra to Aqaba, now with a further extension to Egypt, was once expected to cost $18 billion if Syria were included. Adding plans to revive the old Arab Gas Pipeline would boost this even further, to an astronomical figure. Furthermore, Egypt wants to sell electricity to Iraq and Jordan; high-voltage transmission lines are expensive.

But what about private investment? The Iraqi private sector is nascent and dependent on government spending. Looking solely at Baghdad’s needs, unlike well-endowed Chinese state firms, Jordanian and Egyptian contractors are expected to rely heavily on Iraqi funds to finance infrastructure projects. Even when syndicating finances on their own, eventually the Iraqi government will fully foot the bill either in cash or oil. This is especially problematic for projects where Baghdad is unable to recoup the spent funds anyway — the power sector, where bills go almost entirely uncollected, being a prime example.

It will also be a hard sell for politicians in Baghdad to promote an alliance that would create jobs for non-Iraqis given the country’s own problems on that front. In June, under popular pressure, Baghdad deported thousands of foreign laborers. Demands for employment have been central in protests that took over the country in 2019. Iraq’s unemployment rate rose to 27% and its poverty rate now stands at 25%.

A potential response to China’s BRI in the Middle East?

The truth of the matter is that the Neo-Mashreq is not purely an Iraqi innovation — despite some recent claims in Baghdad — but an American envisaged one. The initiative’s first summit in Cairo was followed by research published by Rand that advocated for a free trade agreement between various countries in the Levant. Rand said the tripartite grouping “could provide the first steps toward achieving the benefits of Levant economic integration.” The report had estimated the associated economic benefits could reach an additional 3-7% of GDP on average.

With China ramping up its involvement globally through the multitrillion-dollar Belt and Road Initiative, which is steadily encroaching on the Middle East, the U.S. and fellow members of the G7 are calling for a rival contender named the “Build Back Better World” (B3W). If the political benefits of the Neo-Mashreq to the West outweigh the financial burden, then and only then would infusing billions of dollars make this project economically sensible. But for that to happen, the three countries need to improve their records of transparency, combating corruption, and wise economic spending.