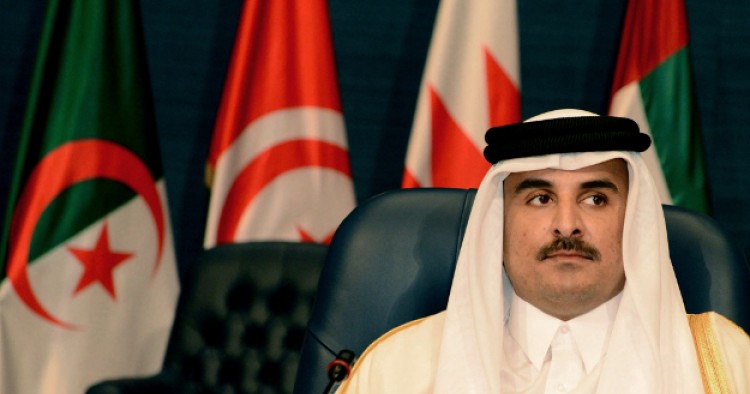 The reshuffle touched upon the key portfolios of foreign affairs and defense, as well as other cabinet positions. The only key ministries left untouched were energy and finance. The reshuffle comes at a critical juncture as oil prices are at a 13-year low and the sheikhdom remains embroiled in regional quagmires, including Yemen, Syria and Libya.

In contrast to his father’s approach to foreign affairs, Sheikh Tamim has been pursuing a lower-profile for Qatar on the international stage and has aligned Doha with Saudi positions, chiefly in Syria, Yemen and Lebanon. Qatar found itself in an uncomfortable regional position when Sheikh Tamim ascended to the throne in June 2013, with many in the region accusing the gas-rich emirate of overreaching and interfering in other Arab nations’ affairs. Doha’s pro-Muslim Brotherhood foreign policy and support for revolutionary movements clashed with other Gulf Arab states’ strategic objectives.

Additionally, Qatar’s support for Sunni Islamist groups in the region under Hamad bin Khalifa angered not only Doha’s fellow Gulf Cooperation Council (G.C.C.) members, but at times also other powerful Middle Eastern nations such as Egypt and Iran, in addition to the United States. After power vacuums emerged across the MENA region in 2011, Sheikh Hamad bin Khalifa sought to extend Doha’s influence via Islamist factions in Egypt, Libya, Syria and Tunisia, while significantly strengthening Qatar’s partnership with Turkey. Such ties, however, fueled tension in Doha’s relationship with Saudi and Emirati officials who viewed many of these groups as threats to the G.C.C.’s security.

Sheikh Tamim prioritized mending Qatar’s relations with Doha’s traditional allies in the G.C.C. early on in his tenure. To achieve this objective, Sheikh Tamim expelled Muslim Brotherhood leaders from the emirate, begrudgingly accepted the Egyptian military-backed regime’s legitimacy and fell behind the Saudi leadership on which factions to support in Syria. Largely due to the emir’s efforts, by November 2014, Riyadh, Abu Dhabi and Manama returned their ambassadors to Doha after recalling them eight months earlier.

King Salman’s ascendance in Saudi Arabia has also contributed to improvements in Doha-Riyadh relations as the new Saudi king has softened the kingdom's tone on the Muslim Brotherhood. The easing of Saudi hostility toward the movement reached a landmark moment last October when Sheikh Yusuf al-Qaradawi—a Doha-based cleric, seen by many as the Muslim Brotherhood’s spiritual leader, whose inflammatory sermons angered Saudi officials for years—appeared next to Abdullah al-Ifan, Riyadh’s ambassador to Doha, at Saudi Arabia’s national day ceremony in Qatar.

Unlike Saudi Arabia, however, the United Arab Emirates has not changed its approach toward the Muslim Brotherhood or other Islamist groups, which has left relations with Qatar rather opaque. Qatar and the U.A.E.’s opposing views of Islamist groups has led to tension between the two wealthy Gulf Arab nations, which manifests itself in the ongoing conflict in Libya where Doha is still supporting, albeit at a lower intensity, the Islamist camp and Abu Dhabi has backed its anti-Islamist allies. However, nowhere is Qatar’s realignment policy clearer than in Yemen, where it has committed troops and aid to support the Saudi-U.A.E. mission against the Zaidi Shiite Houthi rebel movement and Ali Abdullah Saleh loyalists.

The current minister of state for defense, Khalid al-Attiyah, in his capacity as foreign minister, led the efforts to repair Doha’s fractured relationship with Riyadh and coordinate extensively with the Saudis on Syrian policy. As minister of state for defense, he is expected to maintain the same consensual approach. Beyond Syria, Attiyah gained experience while mediating between Yemen’s government and Houthi rebels back in 2007. His transition from the foreign affairs to the defense ministry is demonstrative of the Qatari leadership’s view of the Yemeni dossier as a matter of strategy, not diplomacy.

It is noteworthy that three of Sheikh Tamim’s recent appointees are below the age of 45. By passing its leadership roles from a generation of octogenarians to one that is exceptionally young by global standards, Qatar is following a G.C.C.-wide trend. Like any such major transition, this generational shift is set to face difficulties. For example, throughout his first two and a half years at the helm, Qatar’s 35-year-old Sheikh Tamim has been committed to gaining the legitimacy attributed to his father, especially in the realm of international relations.

The new foreign minister, Sheikh Mohammed bin Abdulrahman bin Jassim al-Thani, who is the emir’s age, maintains a relatively low-profile. Many credit Sheikh Mohammed bin Abdulrahman, who served as assistant foreign minister for international cooperation affairs from January 2014, with handling Qatar’s sensitive relationship with Egypt’s government following the Muslim Brotherhood’s ouster in July 2013. It is likely that the new foreign minister will maintain the lower-profile attitude in regional affairs that has marked Doha’s foreign policy under Sheikh Tamim. Moreover, his background in economic affairs and business development suggests that Qatar may be recalibrating its focus from regional political conflicts to economic interests and trade.

This appears in line with the need to pursue economic development and sustainability as increasingly recognized by all Gulf states. Sheikh Tamim, alongside other Gulf rulers, has already promoted initiatives aimed at improving public services and the public administration’s management, and expectantly making Qatar’s economic ecosystem more efficient, sustainable and prosperous for the long-term.

The new Qatari leading class seems mainly focused on shielding the emirate from the wave of instability that haunts many Middle Eastern states. To achieve this end, the younger leadership is focused on improving relations with its neighbors, getting out of the spotlight, and maintaining economic prosperity at home.