Reasons to Be Optimistic About Egypt 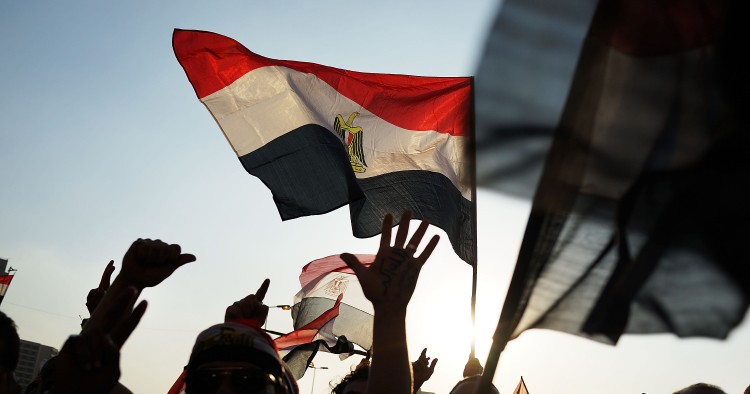 With the dual announcement this week of the completion of a preliminary constitutional draft by a ten-member committee of experts, in addition to appointments to the quasi-governmental National Council on Human Rights, Egyptians finally have reason to be cautiously optimistic.

The constitutional draft retains some of the more problematic provisions of the previous constitution, including provisions relating to women’s rights and freedom of religion.  It has retained Article 2 of both the amended 1971 constitution as well as the 2012 Islamist-dominated document in declaring “principles of Shariah to be the main source of legislation.”  For those concerned with the prospect of a growing role of religion (interpreted subjectively) in public life, this article ought rightfully to be considered.

The silver lining with the new draft, however, is the elimination of Article 219, which specified what those “Shariah principles” are and from where they derive.  In analyzing this article, Ramy Yaacoub noted that when interpreted in its historic, linguistic, and religious context, the article leads to a “social Islamic jurisprudence” that is fraught with potential to

“infringe on all aspects of personal freedoms, business practices, banking, tourism industry, etc.  Social-Islamic-Jurisprudence could affect almost every aspect of daily life, incorporating within it matters of economics, politics, marriage, crime, theology, hygiene, etiquette, health, and Jihad, among many others…and paves the path for literal interpretations of Sharia law, as well as archaic forms of the law and application of punishments, leaving no room for social progression on many fronts.”

Removing Article 219 but retaining the language of Shariah as the main source of legislation not only resonates with many Egyptians who continue to favor its inclusion, but leaves open room for interpretation of what those principles might be and the extent of their enforcement, a marked improvement from Egypt’s Islamist constitution.

Under the third chapter of the new draft entitled “Freedoms, Rights, and Duties,” an anti-discrimination provision is included, which bans differentiation based on gender, religion, origin, or belief.  A specific prohibition against torture is included, as is the principle of presumption of innocence and the illegality of coerced confessions; limitations on detention of citizens and enumerated requirements against abuse of prisoners are present.  Provisions against unlawful searches and guaranteeing privacy are strengthened from previous versions.  Freedom of association and assembly are provided, through notification only, so long as such gatherings are “unarmed.”  Human and sex trafficking, a subject of major controversy in Egypt’s last Islamist-dominated parliament, are prohibited, a move that would remedy many abuses in Egypt if properly enforced.

In a clear challenge to the Muslim Brotherhood, Article 54 permits the establishment of political parties through notification, but prohibits any political activity or party "based on religion” or “(para/)militaristic in nature.”

Article 47 concerning religious freedom falls short in that it unconditionally grants “freedom of belief” but constricts the right to practice and to construct houses of worship to followers of the Abrahamic religions.  Furthermore, its provisions are contingent on and in accordance with “the law,” which has often been regressive on these fronts.

In fact, the subservience of constitutional protections to “the law” permeates the document, as well as former constitutions in Egypt.  Since a constitution is supposed to be the highest law in the land, making its provisions contingent on yet unidentified or existing laws that legislatures (which come and go) have created or may create raises the risk that constitutional protections may be rendered specious.  Nonetheless, Article 67 of the current draft notes that no law dealing with rights or freedoms may compromise the “core” or “origin” of those rights.

Although the draft specifically bans discrimination based on gender, it retains a provision regarding the role of the state in “balancing the duties of women toward family” and toward society.  Furthermore, Article 173 permits the trial of civilians in military courts in cases of “direct attacks on the military,” which leaves room for abuse.  Though press freedom and independence is guaranteed, entities are created to oversee and regulate the media.  And a National Electoral Council is tasked with regulating virtually all aspects of referenda and elections for parliament, the presidency, and even local governments.  A National Security Council, headed by the president and comprised of various ministers and intelligence officers, is tasked with identifying both internal and external threats, securing the country, and taking necessary measures on both “official and popular” levels, raising question marks.

Despite continuing hiccups, there is reason for hope.  The draft has eliminated some seriously detrimental provisions while articulating new rights and increasing existing civil and individual rights, at least in theory.  The draft in its entirety is still subject to the review, commentary, and amendment of a 50-person committee comprised of various professional syndicates, legal experts, activists, religious authorities, and political parties.

Of note is the recent appointment of esteemed rights activists, wielding wide credibility across the political spectrum, to the National Council on Human Rights.  If the government is consistent in these positive appointments to governmental and quasigovernmental entities, there is reason to be hopeful regarding the composition and work of the 50-member committee.

Of course, every law is only as good as its enforcement.  Egypt has struggled on this front, particularly in light of a yet unreformed police force and a judiciary that has been systematically undermined.  Any future government will have to tackle these problems first in order to meet the demands of Article 68, which holds that the state is subject to the rule of law, which is the foundation of good governance and arguably the most important aspect of a functioning, modern democracy.