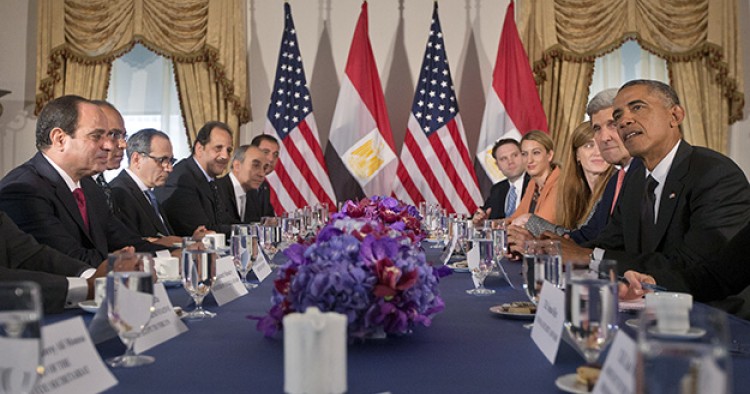 President Obama’s decision to lift the freeze on delivery of military aid to Egypt was the right thing to do to shore up a key strategic alliance in a region where risks to U.S. security are multiplying rapidly. The United States needs Egypt’s help in confronting terrorist and conventional threats in the region, in maintaining Arab-Israeli stability, and as a key player in Arab diplomacy and coalition building. The two sides have serious disagreements over the Egyptian government’s heavy-handed crackdown on dissent, and particularly its effects on violent radicalization, but that discussion should continue within the context of a strong relationship, not be the cause of its dissolution.

The U.S. decision announcing the lifting of the freeze at the same time cancelled Egypt’s eligibility for placing orders on U.S. military equipment in advance of each fiscal year. This eligibility in the past had tied the hands of sitting administrations, as orders were already in the pipeline. The change will give future administrations, starting in 2018, more real-time control of these decisions. And this is a healthy development. But we need to keep our eye on the broad strategic picture.

U.S. military aid to Egypt—as it is to Israel and other countries in the region—is an investment in building and maintaining America’s alliance network; the military investment is made, as it should be, to enhance U.S. national security, deter and degrade enemies, and protect broad U.S. interests, not as an act of charity.

Egypt is key to the United States’ military deployments in the Middle East. Without secure passage through the Suez Canal, use of Egypt’s airspace and military facilities, and coordination on intelligence and logistics, America’s military in the region would be greatly impaired. Egypt also has the largest Arab army and has shown up with boots on the ground when the United States needed it to. It sent one full division during the war to liberate Kuwait, and one brigade during the American deployment in Somalia. With threats multiplying in the region, Egypt’s cooperation and contribution is going to be needed again.

With the rise of ISIS and the proliferation of terrorist groups from North Africa to Yemen, there is broad consensus on the need for counterterrorism aid. But the United States has partly lost sight of its strategic interest in maintaining Egypt’s and other allies’ conventional capacities. The fight against terrorist and non-state actors requires considerable conventional capabilities, as is clear currently in the fight against the Islamic State in Iraq and Syria. More importantly, the struggle to reclaim the ungoverned territories where terrorist groups thrive, whether in Libya, Syria, Iraq, or Yemen, will require more than drone strikes and counterterrorism operations. In its fight against global terrorism, the United States will continue to need conventional allied armies as part of the equation to shore up state sovereignty where it has survived, and to lend support in rebuilding it for states and societies that are struggling to reclaim it.

Of course, there is the conceit that we always know better—even from 6,000 miles away—exactly what each of our allies needs to protect their own national security, even though we seem to have gotten most of it wrong in the Middle East over the past decade and half. Those decisions need to be based on a respectful discussion of how each capital views the security challenges in its own immediate environment.

But more importantly, a key strategic asset for the United States is the web of strong relationships that are built between our officers and those of our allies. Those relationships are the human sinews of our global alliance system. Since Egypt turned away from the Soviets in the 1970s, our military assistance program and the training and exchange programs that came with it have enabled the development of a rich web of officer-to-officer relationships from the lowest to the highest levels. It is these relationships that enable the United States to maintain alliances and activate them when needed. Encouraging Egypt to purchase major weapons systems elsewhere will mean that their officers will be trained in Russia or China. The United States has experienced this loss of influence in Pakistan, where years of boycott meant that in the United States’ hour of strategic need after September 11, there were few remaining working relationships between American and Pakistani officers.

The president’s decision to unfreeze aid to Egypt was the right one. He also announced that he would invite Arab leaders to Camp David this spring to discuss strategic cooperation. And the United States and Egypt are due to start a strategic dialogue led by U.S. Secretary John Kerry and Egyptian Foreign Minister Sameh Shoukry; this dialogue was announced last September but has yet to begin. The United States needs to move forward in thinking strategically about how to marshal its allies in the region to fight terrorism and state failure, and to rebuild regional stability. Egypt is a key player in these U.S. concerns.