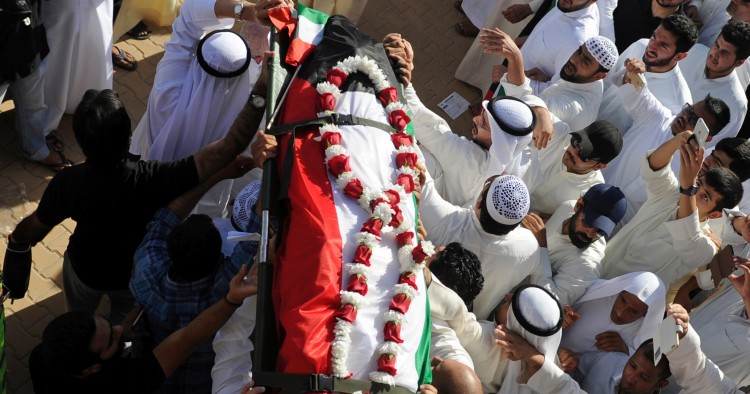 The intensifying rivalry between Saudi Arabia and Iran is raising sectarian temperatures in some smaller Gulf Cooperation Council (G.C.C.) states. Kuwait’s fractious parliament has seen growing tension and even physical confrontation between its Sunni and Shiite MPs in response to regional developments. Growing tension in Kuwait is also evident in the national media and online forums. To maintain Kuwait’s delicate equilibrium, which has been a pillar of the Persian Gulf country’s stability for the last 25 years, the Sabah rulers must cautiously navigate the Middle East’s volatile geopolitical order.

While there are no official numbers, Kuwait’s Shiites are said to number 25-30 percent of the national population and have played a unique role in the kingdom’s political developments. Throughout most of Kuwait’s modern history, Sunni-Shiite relations have not been an issue.  However, there was a brief period of sectarian tension following the Iranian revolution of 1979 when some Sunnis feared that revolutionary Iran would try to leverage the country’s Shiites to threaten Kuwait’s independence and stability. Iraq’s invasion in 1990 changed the threat perception of Kuwaitis, and, interestingly, led to a restoration of confidence and unity among the two communities.

Today, Shiite families and leaders are highly integrated in Kuwait’s political and economic spheres. Shiites hold nine out of 50 seats in the National Assembly and the MPs have a positive relationship with the ruling monarchy. Prominent Shiite families own large Kuwaiti conglomerates, including Al Kazemi International, Marafie Group and Morad Yousuf Behbehani Group, which have interests in shipping, logistics, vehicle distribution, real estate, construction, retail trade and tourism.

Recent regional developments, however, have challenged this status. Last year, authorities charged the former Shiite MP Khaled al-Shatti with crimes such as “offending the Kingdom of Saudi Arabia” for condemning the Saudi-led military campaign in Yemen, of which seven Shiite MPs criticized their government for joining. Abdulhameed Dashti, another Shiite MP, stirred controversy recently by also protesting the Yemen intervention on Hezbollah’s Al-Manar television network, saying that Operation Decisive Storm “will destroy all Gulf countries.”

Accusations in the media, along with arrests and death sentences, against Kuwaiti Shiite who allegedly spied for Iran has further damaged the Persian Gulf state’s national unity. Most recently, in January, a court handed down death sentences to two Shiites—one Kuwaiti and one Iranian—after finding them guilty of spying for Iran and Hezbollah. In response, Shiite MP Saleh Ashour declared that “the anger of Kuwaiti Shiites has reached its peak” and accused Kuwaiti officials of failing to punish Kuwaiti Sunni jihadists for joining the ranks of the Islamic State, otherwise known as ISIS, in Iraq and Syria. Ashour, along with Kuwait’s eight other Shiite MPs, boycotted the January 13 session of parliament, presumably in response to the death sentences.

Kuwait has sided with its G.C.C. partner in the Saudi-Iranian spat, but is treading carefully amid the region’s geopolitical instability. Earlier this month, Kuwait joined the other five G.C.C. states in officially classifying Hezbollah as a terrorist organization. The move came after Riyadh’s decision last month to “review” the kingdom’s ties with Beirut and indefinitely suspend $3 billion in aid to Lebanon’s military and cancel $1 billion to the country’s police. Soon after, Kuwait and other G.C.C. states imposed travel restrictions on their nationals to the small Mediterranean country. The killing of three Kuwaiti nationals in Lebanon, the U.A.E. trial of seven individuals with alleged Hezbollah ties, and the  deportation of ten Lebanese families from Bahrain, all in the last week, are the latest escalations in tensions between Gulf Arab states and Hezbollah.

Kuwait recalled its ambassador to Iran three days after the January 2 attacks against Riyadh’s embassy in Tehran and consulate in Mashhad. Yet, Kuwait did not follow Saudi Arabia’s lead in severing ties with Tehran. Instead, by taking limited action, Kuwait kept the door open for improved ties with Iran. Kuwait’s energy demands are relevant as Tehran and Kuwait City officials have been discussing plans for post-sanctions Iran to supply Kuwait with natural gas. The government’s interest in not antagonizing Kuwait’s Shiite minority was likely another factor in the decision.

Kuwait’s response to the Saudi-Iranian crisis reverberated in the Gulf state’s legislature, where numerous Sunni parliamentarians demanded more robust action against Tehran and Hezbollah, which they accuse of plotting to overthrow Kuwait’s government. On the other hand, the major concern for Kuwaiti Shiites is the ultra-conservative Salafist movement, which gained a foothold in the Gulf state in the 1960s. Although a share of Kuwaiti Salafists have refrained from entering the political arena, others have been participating in parliamentary elections since 1981. Established in 1991, the main Salafist bloc in parliament currently holds three seats in parliament and four out of the 16 seats in the cabinet. Shiite MPs argue that Kuwait’s diplomatic action against Iran and Hezbollah emboldens the Salafists who are openly hostile to their community.

Finally, Kuwait’s leadership must contend with the threat that ISIS poses to the country’s national fabric and security. Last June, a Saudi Arabia-based ISIS-affiliated group, calling itself Wilayat Najd, orchestrated a suicide bombing inside Kuwait City’s historic Shiite Imam Sadiq mosque. The attack, which was carried out only several buildings away from the interior ministry, killed 27 and injured 277. Emir Sabah al-Ahmad al-Jaber al-Sabah visited the mosque shortly after the explosion and called on Kuwaitis to maintain national unity to counter ISIS's agenda. ISIS appears determined to infiltrate the national fabric and destabilize the country by trying to make it a flashpoint of sectarian violence in the region like others in Iraq, Syria and Yemen.

The geopolitical implications of the Saudi-Iranian rivalry and the ongoing crises across the Arab world will continue to challenge Kuwait’s Sabah rulers to remain a “good G.C.C. member” while taking into consideration the concerns of different segments of Kuwait’s population, including its Shiite minority. Indeed, the stakes are high in Kuwait’s precarious sectarian balancing act, upon which peace, prosperity and unity under the banner of ‘one country/one people’ have largely depended for the last quarter of a century.