The Rise of Solar Energy in Egypt 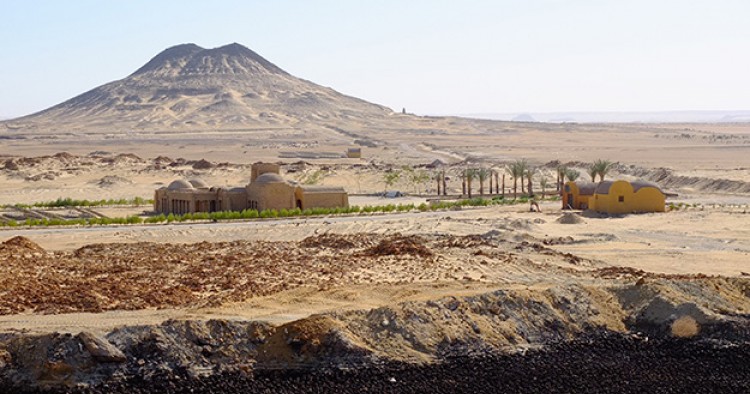 At the Bahariya Oasis 235 miles southwest of Cairo, the mountains of the Western Desert are interrupted by vast circular patterns of greenery. On one of these large farms, in striking contrast to the ancient, wind-shaped sandstone in the background, solar panels stand in neat rows. Here at the center of the largest hyper-arid region on earth, KarmSolar, a three-year-old Egyptian solar energy start-up company, has built its headquarters.

Since KarmSolar fulfilled its first contract for a solar-powered pump in 2012, the company has built and contracted a total of 34 pumps, which in total generate 1.7 megawatts (MW) of electricity in an area far removed from the national grid. When KarmSolar was created, there was not yet even a conversation in Egypt about on-grid solar energy development because fuel subsidies kept oil and gas prices so low. Also, high solar panel prices deterred the government from considering solar a viable long-term option for Egypt. Off-grid development appeared to be solar energy’s only economically viable application.

But prices of solar panels have fallen over the past few years. “This took the market by surprise,” says Amer Barghouth, private investment project manager at the Regional Center for Renewable Energy and Energy Efficiency (RCREEE). He explains that solar cells are in part made of silicon, and that recent progress in the microprocessor industry has brought silicon’s price—and thus solar panels’ price—down.

Other recent developments indicate a new window of opportunity for on-grid renewable energy projects. While Egypt has not been moving toward integrating renewables into its energy mix nearly as fast as Jordan or Morocco, politicians seem to have finally understood the necessity of transitioning to renewable technologies. “The privilege we once had to be able to choose which sources of energy to use has been taken from us,” explains Marwa Mostafa of the governmental electricity regulatory agency EgyptERA.

Egypt’s energy crisis emerged in 2006-2007, when the country became a net oil importer. Over the next several years, energy subsidies skyrocketed until they accounted for almost 20 percent of all state expenditures. Until 2010, Egypt could still rely on exporting natural gas from its massive underground reserves, but the revolution that started in early 2011 impoverished the state, and foreign extraction companies, no longer compensated, stopped working. More worrying still, experts now predict that Egypt will become a net gas importer in the near future. At the same time, Egypt is suffering electricity shortages from its conventional sources and is grappling with distribution problems caused by the decay of its infrastructure. Current figures show that over 90 percent of all energy produced in Egypt still comes from fossil fuels, eight percent from hydroelectricity, and less than one percent from solar and wind combined.

But change appears to be on the way. This past summer, in a move that surprised many given the sensitivity of the issue, President Abdul-Fattah el-Sisi announced his plan to gradually phase out fuel subsidies over the next five years. Since the implementation of the subsidy system by Gamal Abdel Nasser in the 1960s, only Anwar Sadat attempted to lift them, an initiative that immediately sparked riots in the streets and had to be promptly abandoned. Sisi's plan to phase out the subsidies is long overdue, and represents the only way out of the current crisis in that it will push the Egyptian energy industry to be more competitive, innovative, and environmentally friendly—though it remains to be seen whether the five-year timetable will be met.

Then, in September 2014, Minister of Electricity Mohamed Shaker introduced a Feed-in Tariffs (FiT) scheme for renewable energy. FiT involves money paid by the government to homeowners, companies, and industries to generate their own electricity from small-scale to bigger-scale renewable energy installations. Entities that create electricity or feed their extra electricity to the national grid can receive FiT. The mechanism also establishes prices for the purchase of solar and wind energy produced by private companies. FiT schemes have been implemented in numerous countries around the world in an attempt to boost renewable energy production for domestic and commercial uses.

During the first round of the FiT scheme, the government established an overall quota for solar and wind of 4,300 MW of installed capacity, and discussions are underway regarding further rounds. The applications submitted by over 180 companies in the first round surpassed 10,000 MW, indicating the abundance of interest from the private sector. Most of the companies that applied for the tariffs are international consortiums, attracted to the Egyptian market because of the ongoing phasing out of schemes for renewable energy in Europe and North America. This has created an immediate need for new markets, and the best ones today are located in Sun Belt countries like Egypt.

The FiT system divides renewable energy producers into five categories according to size, from small-scale applications like residential rooftop panels to large-scale power plants. Some smaller-scale producers have criticized the fact that only the large-scale operations producing more than 500 MW have been given attractive tariffs, compared to those given to residents and small industries. “There is not enough attention paid to the segment below 500 MW,” claims Khaled Gassar, chairman and cofounder of the Solar Energy Development Association (SEDA), an NGO that seeks to develop the solar energy market in Egypt. “Solar panels for residential and small industrial applications are equally important since [they] give people the opportunity [to use and produce renewables] on their scale”—which adds up if enough participate. According to Gasser, the six million water heaters in Egypt's residential homes account for over half of overall household energy consumption. “If we replaced them with solar water heaters we would save two power stations,” he says.

Omar Hosny, chief technical officer at KarmSolar, notes that the government had a reason for giving less attractive tariffs to the segments below 500 MW. It wants to limit the number of small-scale installations to ensure that the grid can handle all the changes. “It would be much tougher for the government to control small, scattered solar installations and to make sure the grid can tolerate them, given its lack of stability,” he says. With large power plants concentrated in specific areas, the government can better handle the electricity fed to the grid by implementing proper compensation and stability measures locally. While KarmSolar has applied to participate in the FiT scheme, its main market will likely remain off-grid in that its main strength is designing innovative technologies, for which on-grid customers do not have as much of a need.

While Hosny recognizes that introducing the FiT scheme to Egypt officially puts renewable energy on the political agenda, he believes steps should have been taken to educate local financial institutions first. While international financial institutions have experience dealing with renewable energy schemes, locally it is much tougher to obtain financing. This puts smaller Egyptian companies at a disadvantage compared to international solar players.

Most experts agree that FiT on its own won't solve Egypt’s energy problems and that it is one instrument among many that can relieve the crisis. However, it may provide a good deal of relief. The peak loads in Egypt occur in the mornings and evenings and do not overlap with the peak production of solar energy. Yet, according to Hosny, solar penetration may prove efficient in reducing the load on conventional power plants during the day, which could increase the plants’ ability to provide an additional amount of power during peak hours.

The introduction of the FiT scheme has officially raised the profile of renewable energy in Egypt for regional and international investors, demonstrated political commitment to the renewable energy sector, and provided a structured process for the continued development of the sector. Egypt has a diversified economy, the largest population in the Middle East, and one of the oldest industrial bases in the region. It also benefits from the best solar resources in the world. According to Barghouth, “the combination of these elements makes Egypt a very fertile ground for innovative applications of solar energy, whether off-grid, on-grid, large scale, or small scale.”