Russia and the Rukban refugee camp 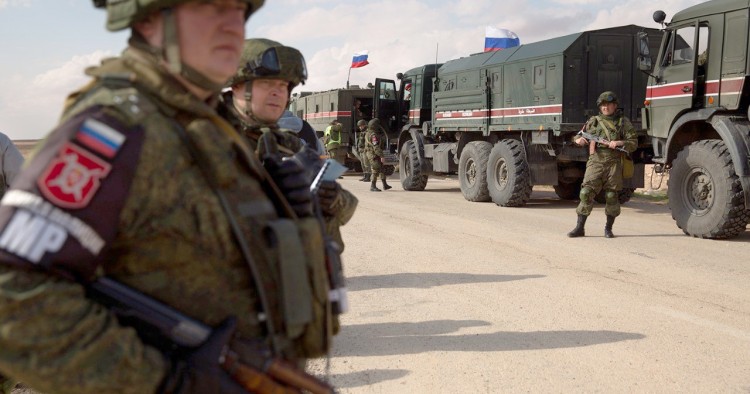 Russia has a new focus in Syria. Intractable stalemates characterize most of the regions that remain outside of the Syrian government’s control. In discussions with Turkey, the other primary player in Syria’s north, little progress has been made on either Manbij or Idlib. Half a year of deadlocked negotiations appears to have made Moscow anxious.

With this in mind, Kremlin officials have recently turned their attention to another target: The Rukban refugee camp. Sitting astride the Jordanian and Iraqi borders, the camp is in a region generally referred to as al-Tanf, from the name of the nearby Iraqi border crossing. This is the last remaining area of southern Syria under nominal rebel control. Its continued existence is largely due to the U.S. forces based there. The U.S. presence in the area was first established in 2016 as a springboard for backing an assault on the then-ISIS-held city of Abu Kamal. While the attack was a dismal failure, the base has remained, along with the Rukban refugee camp.

Russia has long pushed for the camp to be dismantled to restore al-Tanf to regime control and to further incentivize U.S. forces to leave the area. As early as October 2017, Russia’s Ministry of Defense accused the U.S. of using Rukban’s internally displaced persons as “human shields” to protect “the terrorists.” In October 2018, another Russian official blamed Washington for the “dire conditions” in Rukban, claiming their presence made it impossible to deliver aid. This was followed by a November remark comparing the situation to the concentration camps of Nazi Germany.

Since the start of 2019, Moscow has sharply increased the frequency of this rhetoric. A Russian defense official repeated the “hostages” charge on Feb. 19. Again, on Feb. 26, Russia’s UN ambassador, Vasily Nebenzya, claimed that 95% of Rukban residents wanted to leave. As recently as March 27, Russia’s Foreign Ministry proclaimed the allegedly dire state of the Rukban camp.

The obvious impetus for Russia’s recent focus on Rukban/Tanf is the region’s position outside of Syrian government control. In 2018, the Kremlin managed to engineer the return of all rebel-held pockets in central and southern Syria to Damascus’s grip. This was accomplished through a simple formula: Russian military police were deployed to the areas, ensured a general cessation of conflict, and began liaisons with local rebel commanders. At the desired time, each pocket was reduced through a combination of negotiation and bombardment. These pockets — Eastern Ghouta, north Homs, and rebel-held areas of Daraa and Quneitra — were eventually evacuated and guarded by the Russians. The only areas to fall outside of this approach were Idlib and Tanf, the latter of which now stands out like a sore thumb.

Following past strategies, Russia has begun increasing its ground presence near Rukban. In early November, Russian military police escorted a UN convoy providing aid to Rukban. They repeated this maneuver at least two more times, most recently in February. These deployments give Moscow additional leverage. In the Manbij area of northern Syria, Russian military police units have enabled Moscow to dictate the state of affairs to date. Russia is likely seeking to replicate this dynamic in Tanf, although the task will be more difficult. In Manbij, Russian forces merely need to deter their Turkish counterparts from launching any military operation. However, in the southeastern arena, they have much less leverage and are seeking to proactively induce the removal of another force, rather than simply deter a military operation by another force.

Nonetheless, there is a possibility that Russia may yet be able to reach some accord with the United States on Rukban and Tanf, owing to the geopolitical factors at play in the area. The commonly accepted strategic rationale for U.S. forces to remain at Tanf is to block the establishment of a direct Iranian land corridor from Iran to Damascus and Lebanon. Russia also has little desire to see stronger Iranian supply lines to Hezbollah in particular, given the likelihood of such a development reigniting conflict between Israel and the Iran-led “Axis of Resistance,” which experienced severe flare-ups last year. Moscow has even used its military police to halt Iranian aggression against Tanf before. When Iran-backed militias attacked U.S. positions in May 2017, Russian forces soon appeared in the area, after which no further attacks occurred. More recently, the U.S. thanked Russia for its help in bringing aid to Rukban in late November.

It’s unclear what exactly could result from this, even if the U.S. was willing to entertain the idea. Russian forces have recently begun joint patrols with Turkish troops in Manbij, but such a condominium with the U.S. in Tanf seems far-fetched. It is perhaps more likely that this pressure could induce Jordan to hasten the closure of the Rukban camp, as Syria’s southern neighbor presently enjoys strong relations with Russia and is increasingly restoring ties with the Assad regime. Jordan has already reportedly engaged in talks aimed at shuttering the camp.

At any rate, facing growing discontent at home, even a small triumph abroad would provide President Vladimir Putin with something to parade as Russia enters the latter half of its fourth year of direct involvement in Syria. For Moscow’s part, taking control of this last rebel-held pocket would provide much-appreciated progress in a conflict where straightforward solutions are in short supply.

Neil Hauer is an independent analyst focused on Syria, Russia, and the Caucasus. The views he expresses are strictly his own.