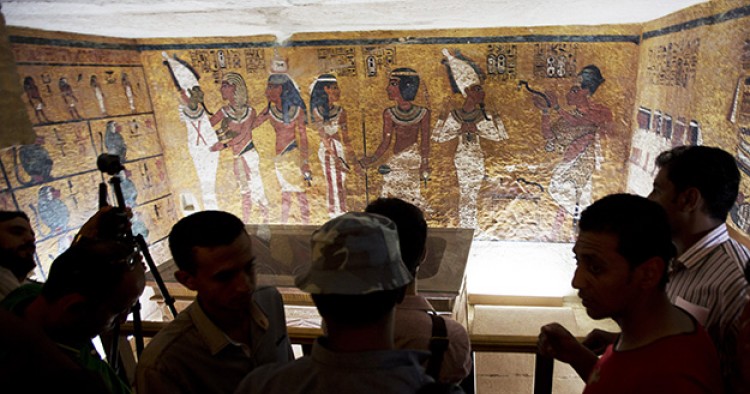 Around the world, priceless monuments and artifacts are disintegrating due to exposure to pollution and hordes of visitors coupled with the sheer weight of age. The inexorable loss of cultural heritage concerns us all, but is especially troubling for decision-makers in places like Egypt that rely on cultural tourism-generated income to stay afloat. How to reconcile the need to make decaying treasures available to the public with the fact that public display is ruining them?

The answer, in recent years, is “digital artisans,” whose work with bespoke technologies to document and reproduce endangered objects approaches wizardry. Factum Arte, a Madrid-based atelier, is at the forefront of this new discipline combining science and art. Its sophisticated replica of Tutankhamen’s burial chamber, recently installed underground in Luxor’s Valley of the Kings, places Egypt at the heart of a revolutionary shift in heritage conservation.[1] The re-creation of one of the world’s best-known antiquities was designed to open a debate to “rethink our relationship with the sites that define us through our shared past,” according to Factum’s founding director Adam Lowe—a polite way of saying that best-practice conservation efforts notwithstanding, our fascination with the past is destroying rather than preserving it for future generations, and that replicas represent the way forward.

Factum’s rigorous methodologies involve 3D scanners that record 100 million measured points per square meter and computer-controlled devices called routers that process the data to carve the objects’ precise shape and surface features in selected mediums, including plaster and polyurethane panels. The details of Tut’s burial chamber were reproduced with forensic accuracy: the replica captures the flaking plaster, chisel marks on the ceiling, and even the brown spots of fungal growth caused by sealing Tut’s mummified body, food offerings, and incense in the tomb while its painted decoration was still wet.

Finished hastily owing to the teen pharaoh’s untimely death, Tut’s is not the largest or most spectacular royal tomb, but it was miraculously untouched by treasure hunters when Howard Carter unearthed it in 1922. Its dazzling contents, including funerary goods wrought from over a metric ton of 22-carat gold, made it one of the world’s most sought-after tourist sites. In the three months following its 1926 public opening, the tomb received 12,000 visitors and has since hosted uncounted millions.[2] Having survived intact for 3,245 years, it has been much reduced in less than a century, not least owing to unsuccessful preservation efforts such as the injection of an acrylic resin into the walls that trapped humidity and caused the painted plaster to lift and fall. Other tombs that have suffered similar or worse damage have already been permanently closed.

Ray Johnson, director of the University of Chicago’s longstanding archaeological mission in Luxor, calls the Tut replica “a priceless digital record…that scientists and scholars will be able to consult in perpetuity.”[3] Beyond its documentation value, the replica offers visitors an alternative to the original that possesses certain advantages, including the possibility of lingering in the tomb as well as photographing and touching its surfaces. Tut’s real tomb will soon be off-limits, but for now visitors may still compare the experience of the original with that of its double and decide for themselves if, under the circumstances, the latter is an acceptable substitute.

Located beside the house of Howard Carter, the replica’s entry was designed to resemble that of the original. Surrounded by desert, visitors descend a ramped shaft, accustoming their eyes to the interior light. The verisimilitude of the replicated burial chamber and its massive sarcophagus struck some aficionados and experts nearly dumb. “Marvelous,” exclaimed founder of the Association of Friends of the Colossi of Memnon Alain Fouquet.[4] American University in Cairo professor of Egyptology Salima Ikram said she was moved to tears.

The public’s acceptance of replicas to reduce pressure on monuments has been growing since the creation of Lascaux II, a facsimile of the Lascaux cave in southwestern France filled with remarkably well-preserved Paleolithic drawings. Built between 1973 and 1983 and installed 200 meters from the original (closed to the public owing to the spread of a destructive black mold), Lascaux II has since attracted millions of visitors.

Replicas of Egypt’s monuments have proved popular ever since Giovanni Belzoni, who discovered the tomb of Seti I in 1817, created a hand-painted walk-through model of two lavishly decorated chambers for an 1821 London exhibition. Riding the wave of its recent discovery, facsimiles of Tut’s tomb and burial goods appeared in the British Empire Exhibition at Wembley in 1924. A more recent touring exhibition of hand-crafted facsimiles (not produced by Factum Arte), “Tutankhamun: His Tomb and Treasures,” has received some 4.5 million visitors since its September 2013 opening.[5]

The Tut replica is conceived as one in a series, and if all proceeds as planned, other royal tombs will be reproduced by a team of Factum-trained Egyptian technicians. In 2008, Egypt’s Ministry of Antiquities granted Factum permission to document and replicate Seti I’s huge tomb (2300 m2) and the exquisitely decorated tomb of Queen Nefertari, both of which have been permanently closed.

Replicating Seti I, a five-year project, would be a monumental achievement. Portions of the tomb that are held by museums worldwide could be recorded, reproduced, and reassembled, making the replica more complete than the original. The possibility of creating additional replicas for touring exhibitions would offer the Ministry of Antiquities an opportunity to generate income abroad, while at the same time inspiring people to visit Egypt and its many unique monuments. The workshop where the replicas will be produced would provide an added attraction, according to Lowe, showing visitors “technology in action and its importance for the site’s preservation, while communicating the skill of the pharaonic craftsmen and the destructive dynamic forces that are introduced when the [real] tombs are visited.”

For now, the matter is in the hands of Egypt’s decision-makers, straddling the domains of the Ministry of Antiquities, the Ministry of Tourism, and the Luxor governorate. The Factum Foundation (Factum Arte’s umbrella organization) estimates that it would cost 20 million euros to establish a workshop, train a team of 50 technicians, and supply the equipment and materials required to create replicas of Seti I and Nefertari. The foundation is committed to obtaining funds to start the workshop, select a team, and begin training this year. The long-term plan involves a new and much improved visitor’s center for the Valley of the Kings, offering information about the site as a whole and access to a series of replicas in addition to monuments open for public view. A host of ambassadors and EU representatives pledged their support at the April 27 opening celebration sponsored by Egypt’s Minister of Tourism, Hisham Zaazou. Acknowledging the jobs the project will generate, Luxor Governor Tarek Saad el-Din says he is ready to supply infrastructure needs.[6]

Factum’s project represents a significant investment in Egypt’s heritage preservation and by extension its cultural tourism sector at a time when the latter is in dire need of a boost. Over 14.7 million tourists visited Egypt in 2010, dropping to 9.8 million after the 2011 uprising. The sector began recovering in 2012, attracting 11.5 million but fell again to 9.5 million last year. Tourism not only accounts for around ten percent of Egypt’s GDP, but has long served as a barometer of political stability and of the country’s standing in the eyes of the world.  Shortly after the opening of the Tut replica, the Ministry of Tourism launched a marketing campaign in the hope of attracting both tourists and investors to the country.[7] A high-profile project like that of Factum reflects confidence in Egypt’s future while highlighting the country’s commitment to a long-term vision of cultural tourism.

Egypt’s Ministry of Antiquities stands to benefit the most and needs only to provide the necessary space for creating and installing the replicas and to facilitate the movement of people and materials. In exchange, Egypt would acquire local technicians equipped to document its heritage sites, a necessary step for conservation efforts that have traditionally been conducted by foreign archaeological missions and consequently dependent on foreign funds.  With just a little cooperation, Egypt could soon possess one of the world’s most sophisticated workshops for heritage preservation.

Lowe is not alone in hoping that the intrinsic appeal of Egypt‘s antiquities can “turn the interest of millions of visitors into a force that will ensure the preservation of Egypt’s heritage and that of other countries.” The question now is whether Egypt, which possesses an estimated third of the world’s antiquities, can seize the moment that may well determine the future of our collective past.

[1] See www.factum-arte.org and www.factumfoundation.org for descriptions of documentation and replication projects.