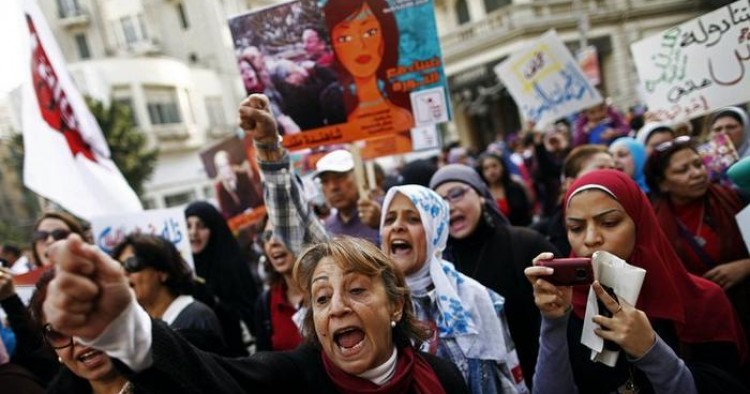 When I moved to Cairo in 1981 I discovered a courtly and safe city. The streets were alive with playful banter, expressions of the renowned Egyptian joie de vivre. Men who wished to attract the attention of lady passers-by sang bits of love songs or called them things like “minaret” and “gazelle.”

Nowadays, Egyptian women are being viciously targeted not just with harassment, but gang assault. So what happened? It’s an important question, especially since Egyptian women are not the only ones contending with feral men, as incidents in India and in the United States, where “rape culture” is on the rise, suggest. While the causal factors may differ somewhat from place to place, the fact that sexual assault is commonplace suggests an unwillingness to confront its root causes. This is particularly evident in Egypt.

In 2002 rowdy teens grabbed my breast in downtown Cairo. This had never happened before. I chased them and gave them hell, but I noticed something else that was odd. No one stopped to help, whereas Egyptians typically always crowded round if someone had their pocket picked or if there was an accident or an argument. People were no longer willing to get involved in altercations since it might mean dealing with the police.

Egypt’s emergency law, in effect since 1981, denied due process and granted the security apparatus carte blanche to bully citizens at will. Implemented to protect society by a control-obsessed state, the law eroded the country’s social fabric by undermining people’s natural impulse to help one another. By enforcing the law arbitrarily to serve its needs, such as suppressing opposition, including banned Islamist groups, the government demonstrated how cruelly those with power can treat those who have little or none.

On 25 January 2013, the second anniversary of the uprising that ousted president Hosni Mubarak, women attending demonstrations in Tahrir Square were stripped by male gangs, whose participants forced fingers into their vaginas. One woman’s genitals were slashed. Operation Anti-Sexual Harassment, founded in November 2012 to assist victims and intervene in such attacks, counted nineteen victims of varying age. Engy Ghozlan, a member of the group, was not alone in calling the violence political, aimed at “the exclusion of women from the public space and the denial of their rights.”[1] Many Egyptians allege that the state hired the perpetrators, while state spokespeople blame remnants of the Mubarak regime.

Whether or not they were hired, how could average Egyptians do this? The country’s socioeconomics are suggestive. In the 1990s a predominantly young population now exposed to Western media in all its exotic, licentious glory was getting edgy. Then as now, neither college graduates nor less educated youth could find decent jobs. Marriage, the goal of most Egyptians, was growing unaffordable, and privacy for couples in Cairo’s tight quarters nearly impossible to come by. The state’s promised benefits of the decade’s neoliberal economic reforms had yet to “trickle down.” Economics held sexuality hostage, frustrating men’s desires and diminishing their self esteem.

In the wake of September 11 and the invasion of Iraq and Afghanistan, and with the regime’s security apparatus growing larger and more brutal, Cairenes were tense and wary. A flurry of religious rulings made some Egyptians laugh, but not all. Hand shaking between unmarried men and women, nudity during (marital) sex, and beauty pageants were deemed offensive to the faith. People grew ruder, more short-tempered. Men might hiss at a lady passer-by or mutter a fervent prayer as if to ward off a devil, or, conversely, they might offer an avid “I f___ you” coupled with a brazen gaze. Egyptians' lack of power over their lives was translating into behaviors that offered some minimal illusion of strength.

In 2006, during a religious feast, when downtown streets were thronged with families and young people strolling or queuing for movies, mobs formed around girls, molesting them. The girls were obliged to take refuge in shops that had to lower their shutters to keep the attackers at bay. The incident sparked controversy. Victims of harassment started coming forward‑‑rich and poor, young and middle-aged, some unveiled, some covered to the eyelids in black. The thwarted energies of unemployed and/or undereducated men were percolating into anger that could have been directed toward the state but instead was aimed at an easier target.

Before the 2011 uprising, as Hosni Mubarak geared up for a sixth presidential term, small but increasingly frequent demonstrations and worker strikes attracted an overwhelming police presence, mass arrests, and beatings. Little wonder that the capital erupted on that joyless national holiday called “Police Day.” Egyptians were tired of being pushed around. Why then in post-uprising Egypt has women’s position worsened, as it certainly has, despite the fact that women represent half the population and around 30 percent of the work force, and were a strong presence throughout the uprising and at subsequent election polls?

It is worth recalling that Egyptian women won the right to vote under Gamal Abdel Nasser in 1956, a time when state-sponsored education programs encouraged women’s participation at all levels, including post-graduate studies in medicine and law. Mubarak instated a parliamentary quota for women of 64 seats, or 12 percent. The recently elected Islamist government deemed that quota undemocratic, and women now hold less than two percent of parliamentary seats.

The reasons women are being marginalized transcend politics. To the Egyptian public, forcing Mubarak from office amounted to a symbolic patricide, but the relief was temporary and the backlash fierce. Religion and state, Egypt’s twin bastions of paternalism, are now united in the Muslim Brotherhood and the authoritarian mores it upholds, which has only made the country’s administrative structure more rigid.

Like their predecessors, today’s high officials were appointed for their loyalty. They are underqualified and ineffectual, and are consequently hypersensitive to critique. Their strict hierarchies preclude teamwork; secrecy and censorship quell debate. Lacking the intellectual and creative flexibility to deal with complex situations such as limited resources, a hungry, young population, and near-zero productivity, the government resorts to coercive force and religious manipulation, including an appeal to obedience, which conflates the state’s demands with the will of God.

In Egypt, as elsewhere, most people find sexual violence abhorrent but are unwilling to address the causes that lie too painfully close to home. Egyptians are indeed up against the very traditions that have long defined them and ensured their survival. But in a world where cooperation must replace obedience and everyone, including women, must shoulder civic responsibilities, the old ways are no longer useful. Defensive, authoritarian politics are by definition divisive and therefore destabilizing. Sexual violence is but one proof of this instability.

Women are publicly abused in post-uprising Egypt for the same reason that torture continues, civilians are still tried in military courts, and more media figures were legally accused of “insulting the president” in Morsi’s first 200 days than in Mubarak’s 30 years in office. The men in power feel threatened, as do the ones in the street with no power at all. And although they would never admit it, these men are fighting dirty not from strength, but like any cornered beast, from fear.