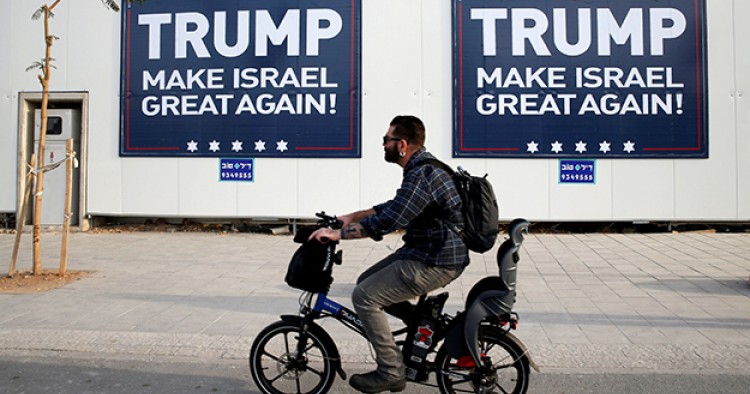 In the early 2000s, the Bush administration’s global ratings were at historic lows. There was only one allied country in which public opinion was favorable to U.S. policies—Israel. Like its citizenry, the Israeli government was strongly supportive of “the freedom agenda,” “the global war on terror,” and the need to eradicate “the axis of evil.” A decade later, President Donald Trump’s inauguration created a very similar effect, winning overwhelming governmental support and backed by a majority of Israelis. In what amounts to irrational exuberance, Israeli officials publically and privately portray Trump as staunchly pro-Israel, a president who will back the right-wing agenda on the Palestinian issue, eradicate radical Islam, and dismantle the Iranian nuclear threat.

In more realistic terms, there are six key policy areas to consider in order to evaluate U.S.-Israel relations under Trump:

First, Trump’s overall strategy and set of priorities. “America First” is actually more than empty rhetoric. Nationalism and isolationism at home and abroad will be the single frequency broadcasted from Washington. Job creation, infrastructure mega-projects, and even the Mexican wall, will all take precedence over any Israel-related issue. In the foreign policy domain, it will be China and Russia that Trump will be dealing with primarily, and not Egypt and Saudi Arabia.

Second, Trump’s energy policies will further diminish the Middle East’s importance to the United States. The energy-independence vector, one of Barack Obama’s most important strategic achievements, will be accelerated. Expanded U.S. fossil fuel exploration and production will further depreciate oil prices, at the expense of Arab oil-producing countries (and planet Earth). While Israel’s economy stands to gain from the low prices environment, its hopes of exporting natural gas to Europe—a project whose economic feasibility has always been highly questionable—might well be dealt a final blow. The economies of Israel’s Sunni neighbors will suffer and their relations with the United States will be strained. However, Iran’s insufficient oil revenues, a critical source of income and political support for the regime, will work to Israel’s advantage.

Third, the eradication of ISIS and radical Islamist terrorism is not in the cards. The United States under Trump is neither about to send tens of thousands of troops to the region, nor is Secretary of Defense James Mattis likely to introduce a revolutionary new strategy to transform the Iraqi army into an effective military machine at an acceptable financial and political price. The fight against ISIS will continue, perhaps with some more resources, but within a similar strategic framework of “degrade and destroy.” Furthermore, the heightened presidential rhetoric might bring about increased terror attacks on U.S. soil, prompting a cycle of reactions and counter-reactions. From Israel’s perspective, these are mixed blessings. While there is clear Israeli interest in military and other pressures on ISIS with a view to eliminating it, the government attaches more importance to combatting Iran, and is less keen on—and actually actively excluded from—joining the U.S.-led international coalition against ISIS. A singular American focus on ISIS might therefore create conflicts of interests between the United States and Israel.

Fourth, the Syrian arena, which presumably will be unceremoniously handed over to Russia’s care, is already a source of concern for Israel. With Iran and Hezbollah sharing the driver’s seat with Russia, Israel is justifiably alarmed and will demand continued U.S. involvement as the only potential counterbalance to Russia. It seems that Syria’s future might become a U.S.-Israel inflection point, much like the Iranian nuclear issue was in the Obama era. Under the assumption that Trump will put a premium on his special relations with President Vladimir Putin, and given the latter’s clear Syria strategy and his deep battle-tested partnership with Iran and Hezbollah, Israel is at a clear disadvantage.

Fifth, the Iran nuclear agreement. Trump promised to annul it during his election campaign, but has already softened his tone. For Prime Minister Benjamin Netanyahu, against the professional advice of Israel’s national security establishment, this issue is very much at the forefront. “I have about five things in my mind [on how to annul the nuclear deal],” he said on December 11, refusing to elaborate ahead of his first meeting with the incoming president. In this case, just as in the case of Syria, a serious attempt to tamper with the agreement’s intricate implementation process will trigger harsh Russian reactions, complicating Trump’s strategic attempt to shape constructive relations with Putin. With China, Germany, the U.K., France, and the E.U. closing ranks against such a move, Israel will once again be isolated.

U.S.-Israel common ground can and most probably will be found on non-nuclear Iranian related issues. Further sanctions on Iran’s ballistic missiles program and its support of terrorism are likely and would serve both countries’ interests.

Sixth, the Israeli-Palestinian conflict, always at the heart of U.S.-Israel relations, will be reframed. The most politically loaded issue in Israel, this conflict is at a historic crossroad, which Trump’s election only serves to highlight. U.N. Security Council resolution 2334 and Secretary John Kerry’s speech notwithstanding, the two state solution is on its deathbed. Israel’s government, aggressively pushed by the settler movement outside and inside the Likud party, is moving to annex parts of the West Bank, believing the new administration will not exercise its informal but ominous veto power over such a break with 50 years of Israeli policy. Any annexation is bound to trigger a significant chain reaction, both on the ground and in the diplomatic sphere. Still, the Israeli government is plausibly betting on U.S. complacency. In a parallel historic shift in U.S. policy, moving its embassy to Jerusalem will be widely interpreted as an effective U.S. withdrawal from any peace process.

On this issue, the Israeli Right’s exuberance is actually quite rational. Israel, with its vast military and economic superiority over the Palestinians, has only to decide on a clear strategy. It enjoys unprecedented strategic maneuvering space. Netanyahu is facing a dramatic choice, and with it can write the next page in the history of Israel. Unluckily for him, history might have other plans, involving Israel’s criminal justice system and culminating with his forced departure from office. Beyond the foreign policy agenda, Israel’s 2017 public discourse—much like the American one—is saturated with mutual allegations between the country’s elected leader, the media, and the old establishment elites, all against the backdrop of criminal investigations into the highest echelons of government. In their first meeting next month, before or after discussing Iran, Syria, and the Palestinians, Trump and Netanyahu will probably compare notes.