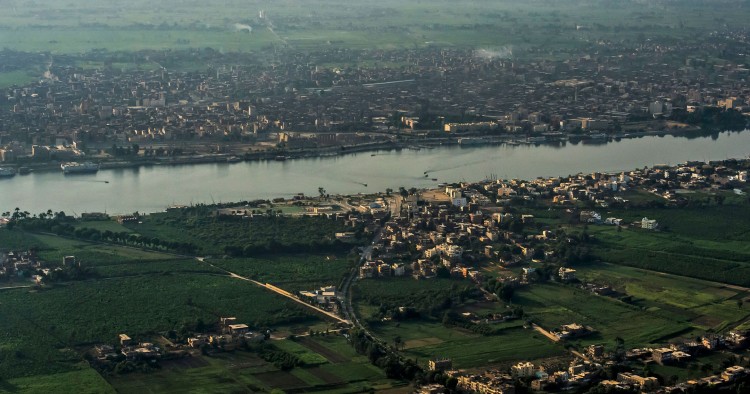 The Middle East is the world’s most arid region and the one most dependent on renewable freshwater resources that originate outside its territories. These resources are largely contained in the Nile, Euphrates-Tigris, and Jordan river basins. An international law-based approach to transboundary watercourse development and management is vital for human security and regional stability. Applying legal principles in the Nile Basin is imperative, as unilateral actions by upstream countries can harm livelihoods on a large scale in downstream countries and destabilize their economies.

The Nile is considered the world’s longest river, although some debate exists about whether the Amazon River is longer. Yet the Nile is not the world’s largest river. Its average flow—82.7 billion cubic meters per year (BCM)—is just 6.5 percent of the 1,292 BCM of water the Congo River discharges annually into the Atlantic Ocean.

Upstream and downstream regions in exotic rivers—which arise in humid areas and end in arid ones—have historically faced different sets of opportunities and constraints. Upstream areas have relied on plentiful rain to grow crops, while downstream, not much could grow without irrigation. For downstream regions, harnessing the river’s flow has always been necessary. In exotic rivers, therefore, infrastructural and agricultural developments, and flourishing civilizations, appear early downstream—as in Mesopotamia and China. Similarly, ancient Egyptians utilized the Nile River to establish the civilization around which the world’s longest-standing state emerged.

Today, upstream Nile countries pursuing river developments face the reality that extensive water, agricultural, and energy infrastructure have already been established and are in stable use downstream. As the potential for disputes inherently exists in all transboundary freshwater basins, international water law provides a toolbox of universal principles for conflict management and resolution.

According to the “no harm” international water law principle, which mirrors the universal legal principle that civilized nations have an obligation to coexist peacefully and refrain from actions that deliberately cause harm to others, downstream developments must be taken into account and protected when upstream projects are planned.

This and other fundamental legal principles have been codified in the 1997 Convention on the Law of the Non-Navigational Uses of International Watercourses. It provides more precise rules developed from pre-existing customary law that are binding on all states, even those that did not formally endorse the convention.

Striving for balance in the distribution of varied freshwater resources’ benefits among riparian countries is what the convention revolves around. It’s backbone is the provision of “equitable utilization” of transboundary watercourses; all other provisions including prior notification of planned measures, prevention of significant harm, and watercourse protection support it. Equitable utilization does not mean that each country is entitled to an equal volume of water; it means that countries must reasonably and fairly share the benefits associated with using the resource. Important factors that determine equitability include the availability of alternative renewable freshwater resources and the impacts of one use on others. Satisfaction of human needs is the paramount criterion. Additionally, customary legal practice has always protected pre-existing downstream uses in exotic rivers.

Countries neither make nor own exclusively the rainfall that feeds watercourses, so territorial contributions to a watercourse’s flow do not grant greater rights to utilization. Otherwise, a country with little or no contribution would have little or no right to this resource—a violent, destructive proposition. In fact, transboundary watercourses’ headwater countries often receive rainfall elsewhere, which provides alternative sources that would have to be factored in when determining equitable utilization. For example, aside from the Nile, three watersheds extend over 67 percent of Ethiopia’s landscape.

How one use impacts others must also be taken into account. The impacts of consumptive uses that permanently remove water from the basin differ from those of non-consumptive uses. International law would preclude consumptive developments upstream of a river in a country with ample alternative resources when downstream co-riparian countries are water-poor.

Applying legal principles to the case of the Nile River is therefore crucial to protect North Africa’s vital water rights. For example, determining equitable utilization in the Nile Basin requires accounting for the Congo River’s resources in the DRC, Tanzania, Burundi, and Rwanda, all of which are also riparian to the Congo Basin. Countries that allow the Congo’s 1,292 BCM of freshwater to be flushed annually into the ocean will not find much support in international law if they attempt to vie for a relatively small resource that their arid-climate neighbors rely on. Alternative sources also include harvested rainwater, which is particularly important in countries with substantial yet variable rainfall, such as Ethiopia.

Notwithstanding its sensibility, international water law has no enforcement mechanism. It is up to governments to shoulder their responsibilities with maturity and comply with international law. Ignoring it would dangerously undermine human security and stability in North African countries, which are most vulnerable to climate change and rising aridity, and where the Nile is the lifeblood for tens of millions of people.